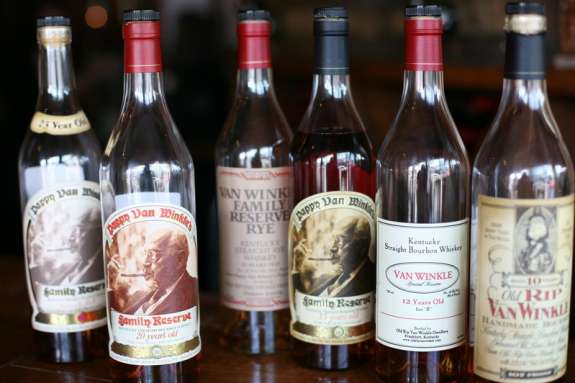 Pappy Van Winkle bourbons at Bourbons Bistro in Louisville, Ky. The spirit was pricey even before a heist at the distillery.

Finally, the great Kentucky bourbon mystery has been solved.

Back in 2013, more than 200 bottles of aging Pappy Van Winkle bourbon vanished from a locked, secure area of the Buffalo Trace distillery in Frankfort, Ky. Even before the heist, the bottles were rare — some fetched as much as $1,000 in private sales.

Franklin County Sheriff Pat Melton has always thought that the heist was an inside job, even when NPR interviewed him for a story in May 2014. And Tuesday, he announced nine indictments that suggest he was right.

Melton tells NPR’s Melissa Block that he’s had detectives on the case for more than a year. They followed a lead to the home of Toby Curtsinger, where they found five barrels of stolen Wild Turkey bourbon. From there, they followed the trail to a whole underground bourbon ring, and another suspect.

The thieves included employees of distilleries, Melton says. Curtsinger, who worked at Buffalo Trace, allegedly ran the show, and, according to Melton, bourbon wasn’t the only thing he dealt.

“Gilbert ‘Toby’ Curtsinger led an organized criminal syndicate based at his residence in Franklin County, Ky., that participated in theft and distribution of stolen bourbon, and also imported and distributed anabolic steroids,” says Melton. “Curtsinger then utilized connections he had from playing softball throughout central Kentucky to sell the stolen barrels.”

And whoever was buying the bourbon had some classy taste — and deep pockets.

But Melton and the investigators haven’t accounted for all of the missing bourbon just yet. The authorities have 25 bottles of Van Winkle bourbon in custody right now, he says — but that’s only about 10 percent of how much was stolen. The rest has been sold, and Melton doesn’t sound optimistic about recovering it.

So what happens to the bourbon that he could find? Prepare to shed a tear, bourbon connoisseurs.

“It’s being held by the case, and it will be secured,” says Melton. “And then I think by law it will have to be destroyed.”

The great Kentucky bourbon heist has finally been solved.

Sheriff Melton, you said on our program about a year ago that you assumed this had to be an inside job.

BLOCK: It turns out, you were right.

MELTON: How ’bout that?

MELTON: It’s just been an amazing case. It’s one of those cases that you look at and chances are, you know, to have one of these is a once-in-a-lifetime case.

BLOCK: The scheme included the notorious theft of more than 200 bottles of prized Pappy Van Winkle bourbon from the Buffalo Trace distillery back in 2013. Some of that rare bourbon sells for thousands of dollars a bottle. And the alleged conspiracy went far beyond that, as Sheriff Melton told us today.

MELTON: Between the beginning in January of 2008 and continuing through April this year, Gilbert Toby Curtsinger led an organized criminal syndicate based at his residence in Franklin County, Ky. that participated in theft and distribution of stolen bourbon and also imported and distributed anabolic steroids. Curtsinger, an employee of Buffalo Trace distillery, and Mark Sean Searcy, an employee of Wild Turkey distillery, worked together to steal and distribute bottles, cases and barrels of bourbon taken from both of their employers. Curtsinger then utilized connections he had from playing softball throughout Central Kentucky to sell the stolen barrels.

MELTON: I’m amazed at the amount. You know, the one stainless steel barrel that we have of Eagle Rare – 17-year-old bourbon – it’s valued alone at $11,000-a-barrel. And there’s still – you know, there’s still a bunch more barrels that are out there, you know, that are still unaccounted for that were stolen. But, you know, we can prove and what we have in our possession, you know, we’ve got about – we’ve probably recovered about $100,000 worth of bourbon.

BLOCK: The sheriff’s special bourbon detail seized 18 barrels, also gallon jugs and Mason jars filled with bourbon. But as for those 200-some bottles of expensive and rare Pappy Van Winkle?

MELTON: We’ve got 25 bottles of stolen – recovered stolen Van Winkle family bourbon in our custody, in our care right now.

BLOCK: Twenty-five, so about 10 percent.

BLOCK: Any idea where the rest of it’s gone?

MELTON: It’s been sold, just like the other cases and the – you know, the other bourbon that’s stolen. I mean, it’s just – we’ve got to go with what we can prove. And, you know, this is the stuff that we’ve recovered that we know we can prove.

BLOCK: Were there surveillance cameras in the distilleries, any evidence that you could get from images inside?

BLOCK: Sheriff Melton, the bourbon that’s been recovered now, what happens to that? Does it go back to the distillery? I mean, how are you sure that it’s not contaminated?

MELTON: Right now it’s being held by this case and will be secured, and then I think by law it will have to be destroyed.

BLOCK: Has to be destroyed?

BLOCK: That’s a lot of bourbon.

MELTON: That is a lot of bourbon.

BLOCK: Are you a bourbon drinker yourself?

MELTON: I am not.

BLOCK: No Pappy Van Winkle on your shelf, huh?

MELTON: I’d love to have one. I collect bourbon bottles. My father did for many, many years. But, you know, obviously, it’s so hard to get. And hopefully one day I’ll be able to purchase one.

BLOCK: That’s Sheriff Pat Melton of Franklin County, Ky. We were talking about the long-running theft of Kentucky bourbon that led to the indictments of nine people today. They’re charged with being part of an organized crime syndicate, an underground bourbon ring. Transcript provided by NPR, Copyright NPR.