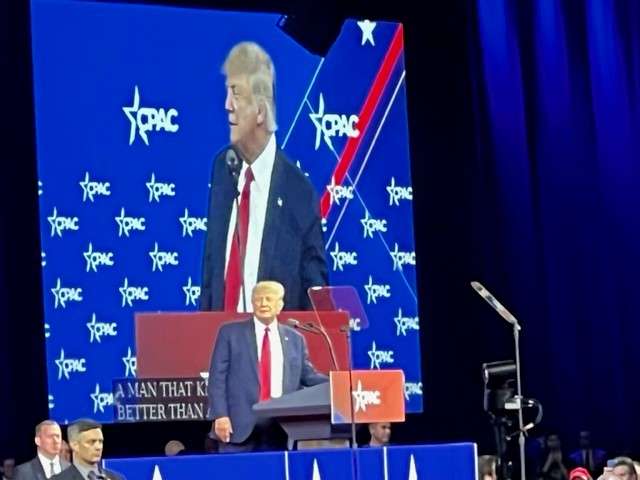 The Conservative Political Action Committee wrapped up Sunday.  Former President Donald Trump spoke for about an hour and a half over the weekend during a keynote speech to a packed ballroom at the Rosen Shingle Creek Hotel in Orlando.

He touch on hot topics such as critical race theory, inflation and the Russian invasion of Ukraine.

“The Russian attack on Ukraine is appalling. It’s an outrage, and an atrocity that should never have been allowed to occur, it never would have occurred,” he said, “We are praying for the proud people of Ukraine.”

Trump went on to say this invasion wouldn’t have happened on his watch. “I have no doubt that President Putin made his decision to ruthlessly attack Ukraine only after watching the pathetic withdrawal from Afghanistan, where the military was taken out.“

Also, he said reporters questioned if he thought Putin was smart. He responded, “The problem is not that Putin is smart, which of course, he’s smart. But the real problem is that our leaders are dumb. So dumb.”

“It was good. It was good. I like the way he presents himself. It’s pretty much the same stuff. But he gets us excited,” said Schwingle.

He said this was his third time at CPAC, but that he’s been to some 15 “Save America Rallies” to support Trump.

That support can also be seen in the results of this year’s Straw Poll, which the conference conducts every year to gauge how people feel about the conservative movement, including possible presidential candidates.

More than 2,500 CPAC attendees participated in the survey with 97 percent showing approval of the job Trump did as president. And he’s still their front-runner if the election were to be held today.

“Donald Trump 59%. So much for him fading. He had 55% last year. Ron DeSantis is at 28%,” said Jim McLaughlin with McLaughlin and Associates — which conducts the survey. When participants were asked about that same question without Donald Trump as an option, Gov. Ron DeSantis got 61% of the vote.

But, primary results may look more like the first poll as Trump says he plans to “make America great again.” “We did it twice. And we’ll do it again. We’re going to be doing it again. A third time.”

As the last sessions of CPAC wrapped up, Duane Schwingle reflected on the weekend. “It’s been a great feeling of a combination of desperation and optimism,” he said. “And the two together making a real big impact.”