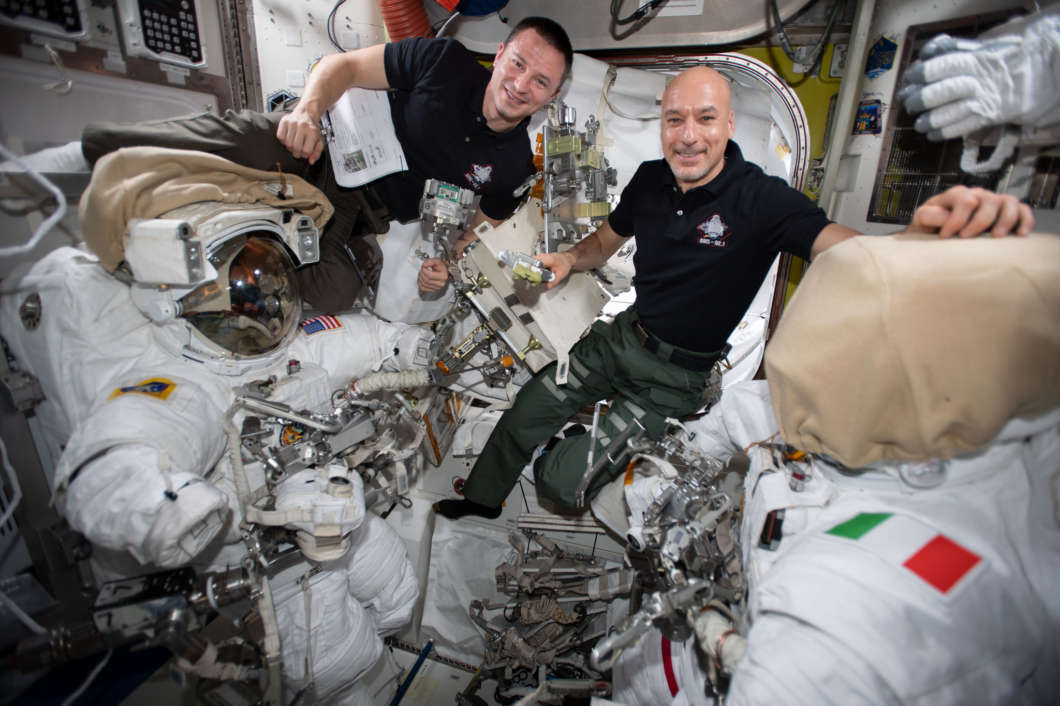 Armed with dozens of dissecting tools, Italian astronaut Luca Parmitano removed a protective shield to gain access to the inside of the Alpha Magnetic Spectrometer. He handed the 4-foot-long (127-centimeter-long) panel to his spacewalking partner, American Andrew Morgan for tossing overboard.

This latest piece of space junk poses no danger to the orbiting lab, according to NASA. The 20-pound (9-kilogram) panel should remain in orbit a year or so before re-entering the atmosphere and burning up.

NASA considers these spacewalks the most difficult since the Hubble Space Telescope repairs a few decades ago. Unlike Hubble, the spectrometer was never meant to undergo space surgery. After 8 ½ years in orbit, its cooling system is almost dead.

Parmitano and Morgan will go out at least four times this month and next to revitalize the instrument.

Today’s spacewalk to start repairs on the Alpha Magnetic Spectrometer is wrapping up and @Astro_Luca takes a ride on the @csa_asc Canadarm to join up with @AstroDrewMorgan at the Quest Airlock. https://t.co/cBNqC5JGaz pic.twitter.com/MszS438uop

Delivered to orbit by Endeavour in 2011 on the next-to-last space shuttle flight, the $2 billion spectrometer is hunting for elusive antimatter and dark matter.

It’s already studied more than 148 billion charged cosmic rays. That’s more than what was collected in over a century by high-altitude balloons and small satellites, said lead scientist Samuel Ting, a Nobel laureate at the Massachusetts Institute of Technology. He monitored Friday’s spacewalk from Mission Control in Houston.

The huge spectrometer — 16 feet by 13 feet by 10 feet with a mass of 7 ½ tons — was designed to operate for three years. By installing four new and improved coolant pumps, the astronauts can keep it working throughout the life of the space station, or another five to 10 years. The replacement pumps arrived at the space station nearly two weeks ago, along with an assortment of new tools.

Parmitano, the lead spacewalker, and Morgan trained extensively for the plumbing job before rocketing into orbit in July. They hustled through Friday’s main task of removing the shield and tossing it overboard, working well ahead of schedule.

Next week’s spacewalk will involve slicing through stainless steel tubes and splicing in connections for the new pumps, which like the old will use liquid carbon dioxide as the coolant.

In some respects, this work, 250 miles up, is even trickier than the Hubble spacewalks, said NASA project manager Ken Bollweg. As before, the stakes are high.

“Any time you do heart surgery you’re taking some risks,” Bollweg said in an interview earlier this week.

Morgan is an emergency physician in the Army — a bonus for this kind of intricate work. He’s making his first spaceflight.

For second-time station resident Parmitano, it marked his return to spacewalking following a close call in 2013. He almost drowned when his helmet flooded with water from the cooling system of his spacesuit. Unable to talk because of the rising water, he managed to keep his cool as he made his way back to the safe confines of the space station.