Astronaut & Spacewalker Nicole Stott Talks Gender Equality, Art In Space and Efforts To Inspire The Next Generation Of Explorers 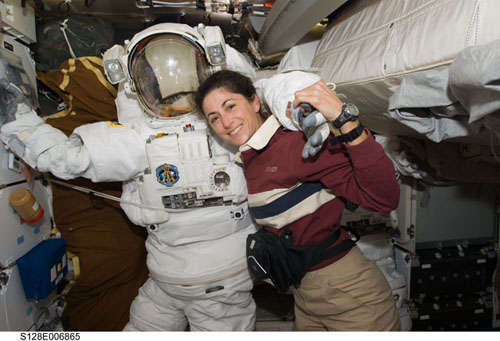 Nicole Stott: Spacewalker, artists and advocate for all explorers.

Last month, Astronauts Jessica Meir and Christina Koch  made history by conducting the first all-female spacewalk. While women have been space walking since 1984, this marks the first time a team has been made up of an all female crew.

Koch and Meir penned a Washington Post op-ed from space applauding NASA’s efforts for equality and calling on leaders to continue to include all humans as exploration efforts move forward.

There have been 221 spacewalks at the ISS and 37 have included women. But overall, there have only been 15 female spacewalkers. Retired NASA astronaut Nicole Stott is one of them and we chat with her about the historic milestone and what that means for gender equality in the astronaut corps.

Stott is also an artist, one of the first to paint from space. We’ll talk about her efforts to inspire the next generation of space explorers through art and outreach.

I’d Like to Know: An interstellar comet is about to visit us.

An interstellar comet is zooming through space and it’s about to make a pass through our solar system. It is only the second identified space rock to visit us from interstellar space — so what can we expect? And why are scientists so excited about it?

Josh Colwell and Addie Dove — planetary scientists at the University of Central Florida and hosts of the podcast “Walk About the Galaxy” — help answer Brendan’s simple question: What the heck is this thing? \

**Got a question for “I’d Like to Know”? Send it in! Shoot us an email at arewethereyet@wmfe.org.**

Boeing completed a critical test of its Starliner capsule designed to take NASA astronauts to the International Space Station. It’s part of a partnership between NASA and private companies to launch astronauts to the International Space Station from Florida — a first since the end of the space shuttle program in 2011 — and paves the way for an uncrewed test flight to the ISS December 17.

SpaceX is also planning for a critical safety test of it’s abort system later this year.  SpaceX has already completed an uncrewed test mission to the ISS earlier this year and NASA said the company could send the first human astronauts early next year.

SpaceX launched 60 of its Starlink satellites from Cape Canaveral Monday on a Falcon 9 rocket. The company wants to blanket the globe with high-speed, broadband internet access. It’s the first round of thousands of satellites needed to complete the constellation.

SpaceX isn’t alone. Another company One Web plans to start launching 30 satellites a month starting next year — and that has some worried about orbiting traffic and the potential for collisions.

SpaceX said the network can operate safely. Each satellite is equipped with systems to steer it away from potential crashes. And if a satellite dies, it will fall out of orbit and burn up safely in the atmosphere.

Whether or not other companies will play nice and how satellite regulation might change is yet to be seen.

Next week, we’ll explore NASA’s Voyager 2 mission. The probe launch 42 years ago. Last year, the spacecraft punched through the boundry of the solar system into interstellar space. Scientists are now publishing findings from the mission’s voyage into interstellar space. We’ll speak with New York Times science reporter Kenneth Chang about how the mission is changing our understanding of the solar system.