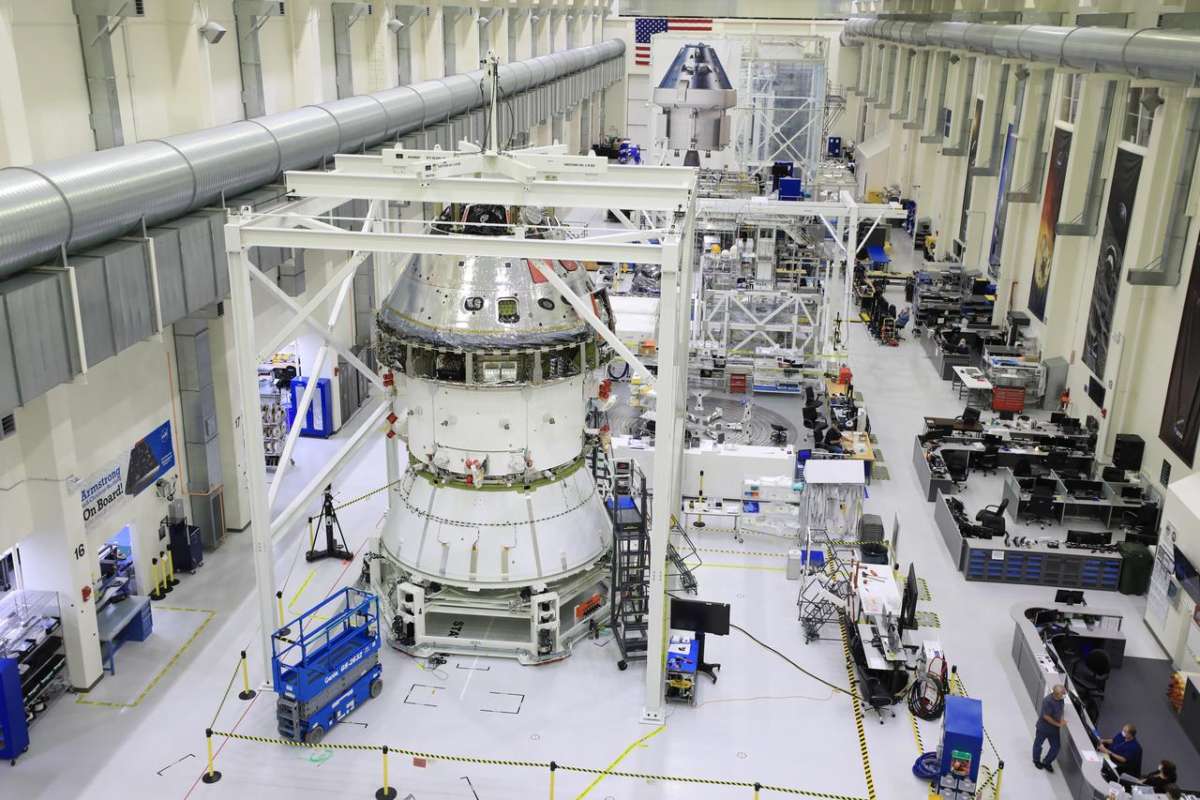 NASA's Orion spacecraft, slated to launch to the moon for Artemis I, assembled at Kennedy Space Center. Photo: NASA

NASA’s Orion spacecraft is the next deep-space vehicle designed to take humans to the moon. We’ll talk with NASA’s Amy Marasia about the process and what it will take to get humans back to the moon in the 2020s.

Then, scientists have their eyes set on a metallic asteroid called Psyche. NASA is moving forward with plans to send a probe to the intriguing asteroid. So what can we learn from a metal asteroid? We’ll ask our panel of expert physicists on this week’s I’d Like to Know segment.

NASA’s Orion spacecraft is scheduled to launch next year from the Kennedy Space Center on an uncrewed test flight around the moon. Work on NASA’s next deep-space vehicle reached a critical milestone with the addition of an adapter that attaches it to NASA’s SLS rocket.

In a conversation with NASA’s Amy Marasia, Orion Spacecraft Assembly Branch Manager, we explore the assembly of a vehicle that takes us one step closer to putting humans back on the moon.

The planning behind the assembly of the Orion Spacecraft is supported by NASA’s contractor Lockheed Martin. “Installation drawings are translated into production orders for the engineers and technicians that are on the floor actually performing the hands-on work,” said Marasia. “Then using those production orders with all the intricate steps down to the bolt and the washer level — that is how they essentially assemble the spacecraft.”

Assembly also includes adding metallic pieces and thermal protection system tiles that will protect the spacecraft during the mission.

“It is a lot of detail. Every step is carefully planned [and] we do the best we can to cover all contingencies [in the process],” Marasia added.

This vehicle is slated for NASA’s Artemis I mission, which will carry no humans on its first trip to the moon. The Artemis I spacecraft assembly process differs from future vehicles that will carry astronauts, as there are no seats nor console displays.

“We don’t have some of the life support systems installed on this vehicle for a crew but everything else is fairly common,” Marasia said, explaining that small differences are part of a strategy that will help NASA’s future missions.

NASA’s Orion is essential in proving that a vehicle like this can support a longer mission around the moon and providing space for improvements that will guarantee a safe journey to the moon in the next 10 years.

“This vehicle is our opportunity to really prove out the current system before we actually put a crew on board,” Marasia said.

Most of the asteroids orbiting between Mars and Jupiter catch the eye of scientists because of their location and their rocky materials, but asteroid Psyche has a unique feature — it’s metallic.

Psyche’s metallic composition may reveal new details about other asteroids and the history of our solar system.

University of Central Florida’s scientists and hosts of the podcast Walkabout the Galaxy Addie Dove, Jim Cooney, and Josh Colwell talked on the peculiarity of the asteroid Psyche and the NASA mission that will explore the metallic iron and nickel-composed body.

“The Psyche Mission is an orbiting mission that is going to try to understand what [the asteroid] is made of [and] what its surface is,” Addie Dove said.

The mission includes a magnetometer to identify a magnetic field and how it affects the behavior of the asteroid as well as a gamma-ray and neutron spectrometer to look for different types of hydrogen and metals, said Dove.

The Psyche probe is classified as a NASA Discovery mission scheduled for 2022, which makes it less expensive than a more intricate mission to outer space. About $850 million are being invested into exploring Psyche and identifying the origin and history of it. The presence of heavy metal suggests it might be the result of the multiple collisions that were prevalent in the early years of this solar system.

“It’s an exciting time for folks to study asteroids, comets and smaller bodies in the solar system. One of the reasons that we’re interested in these bodies is that they can tell us a lot about the history of our solar system and its evolution,” Dove said.

Psyche’s exploration will also give us a different insight into how other asteroids are formed and how they change.

“There’s a great variety of different kinds of objects out there and each new one we go to we learn something new,” Josh Colwell added.

The SpaceX Crew Dragon capsule that will launch the next round of astronauts has arrived at the Kennedy Space Center ahead of a launch late October.

It will be the first operational mission under NASA’s Commercial Crew program — a partnership with private companies to ferry astronauts to the International Space Station. SpaceX is launching three NASA astronauts and a Japanese astronaut.

NASA’s other commercial partner Boeing is planning another uncrewed test mission possibly late this year after a previous attempt failed to reach the ISS last year.

The Delta IV Heavy has launched other big missions like the first orbital flight of NASA’s Orion capsule and the launch of NASA’s Parker Solar Probe back in 2018.

The mission is currently scheduled to launch at 2:12 a.m. ET. Weather remains favorable.