As Wildwood’s population soars, it makes plans to improve the downtown 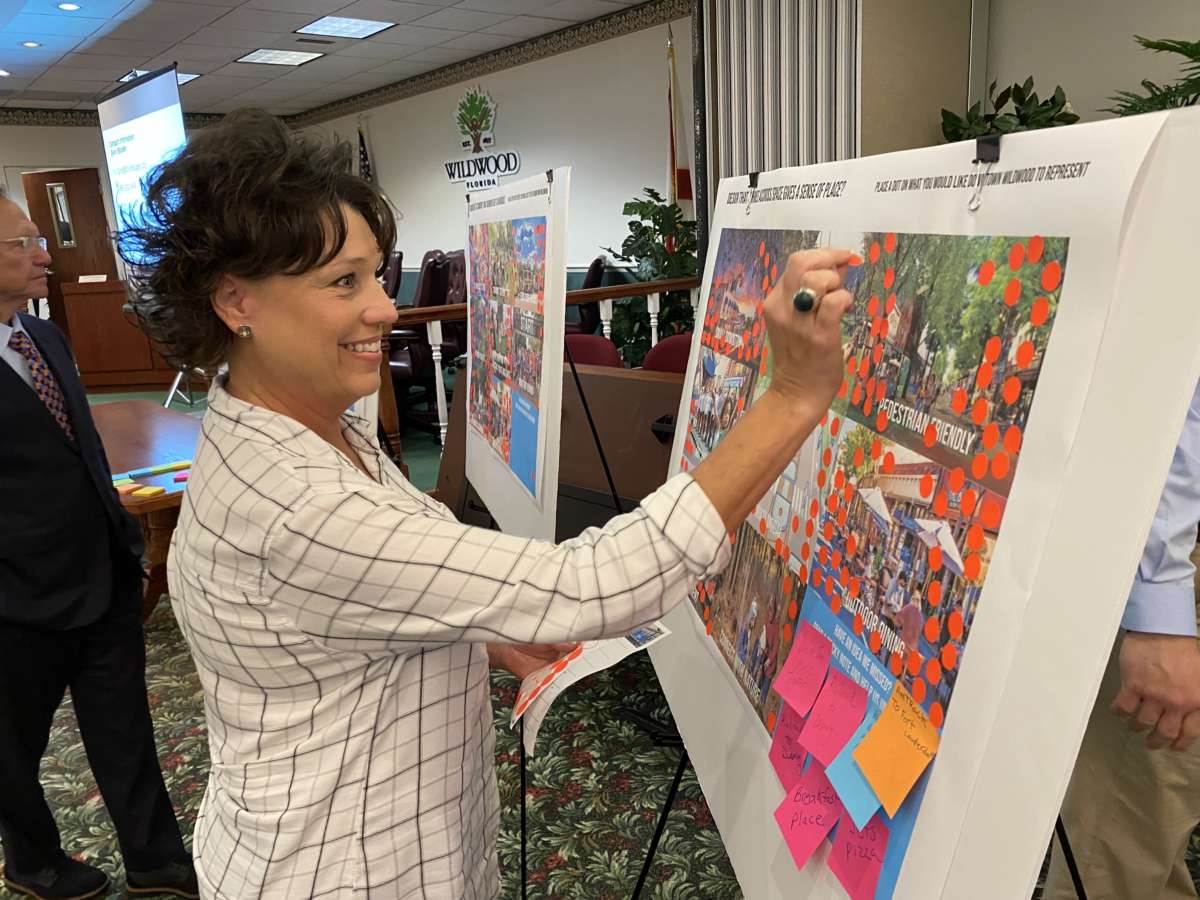 Beth Hunt places dots on a planning board during a Wildwood forum on the city's Downtown Master Plan. Photo: Joe Byrnes, WMFE

The Sumter County city of Wildwood is being transformed by soaring population growth as The Villages, a huge retirement community, adds thousands of homes.

Now, city leaders hope to engage the new residents and others in a master plan to revive the downtown.

When you stand in front of Wildwood City Hall and look out, you see U.S. 301, a four-lane highway humming with cars and 18-wheelers.

On the other side of U.S. 301 — also known as Main Street — is a row of historic buildings, old store fronts, some of them still occupied.

Right behind those buildings are the CSX railroad tracks.

This is downtown Wildwood, a Florida city settled in 1877.

Mayor Ed Wolf — in an interview several months ago — remembered when Wildwood was a “small railroad town” in the 1960s.

His wife grew up in Wildwood and told him how the whole town used to gather to see the circus animals and entertainers when their train stopped here.

“I wish I could have lived in Wildwood at that time,” Wolf said. “It sounds like it was the ideal. It was almost the Mayberry type of area of Florida, from what I understand and talking to some old friends that lived here.”

Hard times hit when the railroad jobs disappeared. The state four-laned U.S. 301, and Wildwood lost most of its historic buildings.

“We had hotels here and boarding homes for the railroad and we lost all that,” he said. “We’ve still got a couple of the old buildings over here from by-gone days that we’re trying to save.”

But now the city is growing like crazy because of The Villages.

And it’s just beginning. The Villages plans 60,000 homes in new parts of the city mostly south of the Florida Turnpike.

“I think you’re going to see Wildwood become one of the larger cities in Central Florida,” Wolf said.

So what will happen to the old part of town? Will it flourish? Will it still be recognizable as Wildwood?

The Downtown Master Plan coming at year’s end could provide some answers.

City Manager Jason McHugh says Wildwood wants to offer something different for its people in The Villages.

“We understand the relationship we have with our residents that are in the city of Wildwood and are Village residents,” McHugh said. “And The Villages itself, the development, is such an economic force here in Wildwood, we’re not trying to compete with them.”

The master plan could lead to changes that make the area better for pedestrians, slow the traffic down, add roundabouts and bring more restaurants and shops.

“[I]f you’re walking on 301 right now in downtown, it’s not a pleasurable experience,” he said. “The trucks are kind of going by you. It’s just, you don’t feel safe, you know. We really want to make it much more inviting and more safe and help build a sense of place in Wildwood. And that starts with 301.”

Public forums for the Downtown Master Plan kicked off Monday with leadership expert Quint Studer urging residents to set “the loftiest goal possible,” adding, “’cause why shouldn’t you make Wildwood the greatest place in the world to live?”

Local Realtor Gerard Corbin was one of about 70 people at the forum. He wants to see more recreation facilities and activities for kids, and he looks forward to the economic growth.

“We’ve been without it for a while,” Corbin said. “A lot of the distressed properties that’s around that need to be revitalized and brought back to life, not only brought back to life but bring local businesses, local shopping, stuff that we need for the homes that’s to come in the future.”

Villages resident Bruno Falvo has lived in Wildwood for three years. He has ideas to make downtown more pedestrian friendly.

“I also think we ought to put fake fronts on all these old buildings to make them beautiful and new,” he said.

Another Villager, Debbie Kazmierczak, shared an idea that sounds a little familiar.

“We were suggesting to get a train depot built,” she said. “And this could be a hub for everywhere to come to go to Orlando, Disney World.”