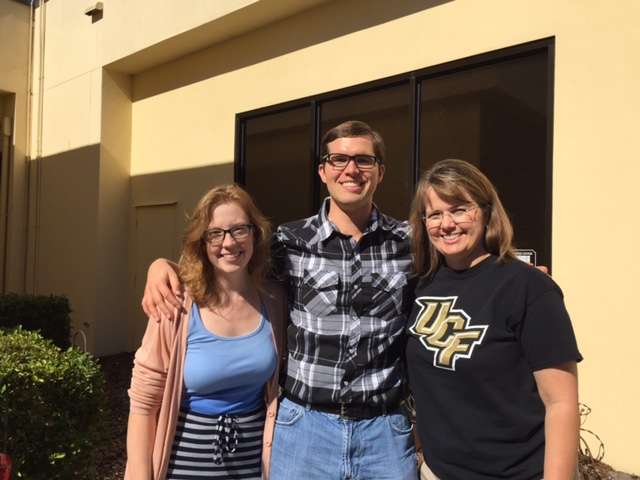 At a meeting for young stroke survivors at the University of Central Florida’s Aphasia House, it’s craft time.

Here, a few of the young people who have had strokes are chatting. They melt peppermints into cookie cutter shapes. But the crafts are really just pretext for hanging out and chatting with people who know what it’s like to survive a stroke at a young age.

Dierda Lee, 35, is doing crafts with the group. She speaks slowly. She had to relearn to speak after the stroke because it also caused aphasia, the loss of the ability to read, write and speak caused by damage to the part of the brain that controls language.

Soon, the conversation turns to Metallica. Lee was a fan when she was younger.

Lee had a stroke on St. Patrick’s Day five years ago at the age of 29. She worked a fast-paced job in the mortgage industry. Now, Lee hopes she’ll be able to work as a receptionist at a nonprofit set up for stroke victims.

Her advice for young stroke survivors with aphasia? Be patient.

Lee is part of what researchers call a disturbing trend. Americans aged 25 to 44 are seeing their rates of stroke go up 43 percent. Researchers aren’t sure why.

It could be an increase in obesity, diabetes and bad cholesterol in the younger age group. It could be that advances in imaging are diagnosing more strokes that might previously have been missed.

But the end result: More young stroke victims. And when you add in that 25 to 40 percent of stroke victims also have aphasia, that means more young people have to reteach their brain to speak all over again.

“We are seeing more younger people with aphasia attending our program,” said Leora Cherney, the director of the Center for Aphasia Research and Treatment at the Rehabilitation Institute of Chicago.

Cherney said younger patients with aphasia have different wants and needs. They want to go back to school, go back to work. Some of them have families with young children.

The UCF Aphasia House is one of a few dozen intensive comprehensive aphasia programs in the world. Patients come from all over to spend six weeks at the college reteaching the brain how to speak.

And it’s built like a real house, complete with a big kitchen and dining room. Just before the holidays, they had a full spread: Turkey, gravy, mac and cheese.

“I think food just generates conversation,” Whiteside said. “Interacting with each other, laughing, crying. Having life again. It’s all about finding a new quality of life. No one that has aphasia, you never signed up for it. You woke up one day and realized you couldn’t speak.”

“Hi my name is Wade Cole,” Cole said. “I live in Tennessee.”

In January of 2015, he was a double major in math and philosophy at East Tennessee State University and had completed his pre-requisites for medical school.

Then an aneurysm ruptured in his brain causing a massive stroke and bleeding. Having aphasia probably feels like being plopped into a foreign country with no understanding of the language.

While Cole lost the ability to communicate, he didn’t lose his voice. Cole was able to sing Amazing Grace because music is in a different area of the brain than speech. And he has a beautiful voice.

“Singing has been drawn into speech therapy in recent years because it gets the process started,” said Arianana Morgart, Cole’s speech language pathologist. “So a person who may not be able to say ‘My name is Wade Cole’ may very well be able to sing it.”

Cole is going back to Tennessee. He has made gains while at the Aphasia House, but he still has a long way to go.

Will he try to join a choir back in Tennessee?