As Iran Nuclear Talks Resume, Critics Ratchet Up The Rhetoric 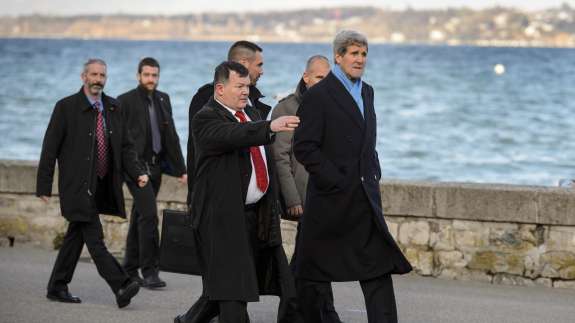 U.S. Secretary of State John Kerry goes for a stroll along the shore of Lake Geneva on Sunday prior to renewed nuclear negotiations in Geneva with his Iranian counterpart.
Image credit: Fabrice Coffrini

U.S. and Iranian negotiators huddled in a venerable lakefront luxury hotel in Geneva on Monday, trying to close the gaps in their positions on what the future of Iran’s nuclear program should be and when sanctions against Iran might be lifted.

U.S. Secretary of State John Kerry and Iran’s foreign minister, Mohammad Javad Zarif, led their respective delegations — which featured new faces, in the latest sign that the talks are advancing.

The two sides are trying to achieve a framework agreement by next month, and have given themselves until the end of June to flesh out that framework into a comprehensive deal.

Broadly speaking, the U.S. and its five negotiating partners — Britain, France, Germany, Russia and China — are pressing Tehran to shrink its ability to produce nuclear fuel by enriching uranium, and to dispose of much of the fuel it does produce in order to ease international fears that Iran could covertly refine the fuel to weapons-grade level.

For its part, Iran is demanding an early and permanent lifting of the key sanctions strangling its economy, rather than temporary suspensions or phased-in sanctions relief targeted to Iranian nuclear concessions.

Critics of this nuclear diplomacy are stepping up their attacks. Israeli Prime Minister Benjamin Netanyahu told his cabinet Sunday that “it’s astonishing that even after the recent IAEA [International Atomic Energy Agency] report determined that Iran is continuing to hide the military components of its nuclear program, the nuclear talks … are proceeding.”

In fact, the IAEA’s latest report does not conclude that Iran is hiding military components of its program, as Netanyahu alleged. The agency does say it has longstanding questions about past research and other activities that Iran has yet to explain.

Rouhani’s “sheer lies” response, however, side-stepped Netanyahu’s claim about military aspects and focused instead on Iran’s homegrown uranium enrichment program, which grew by leaps and bounds after nuclear talks collapsed a decade ago.

Criticism of the nuclear talks is expected to ratchet up when Netanyahu travels to Washington to address Congress on March 3 despite the White House’s objections. The Israeli leader has made plain his intention to blast any deal with Iran.

Congressional Democrats have said they won’t vote on any new Iran legislation before March 24. If negotiators can hammer out a framework agreement laying out the major points of a final deal before then, the White House might be able to persuade Congress not to pass legislation that might jeopardize the talks while there’s still a chance of success.

In any event, all negotiating teams say there’s no interest in extending the talks past July 1. However, it’s worth noting that similar claims were made as previous deadlines approached.