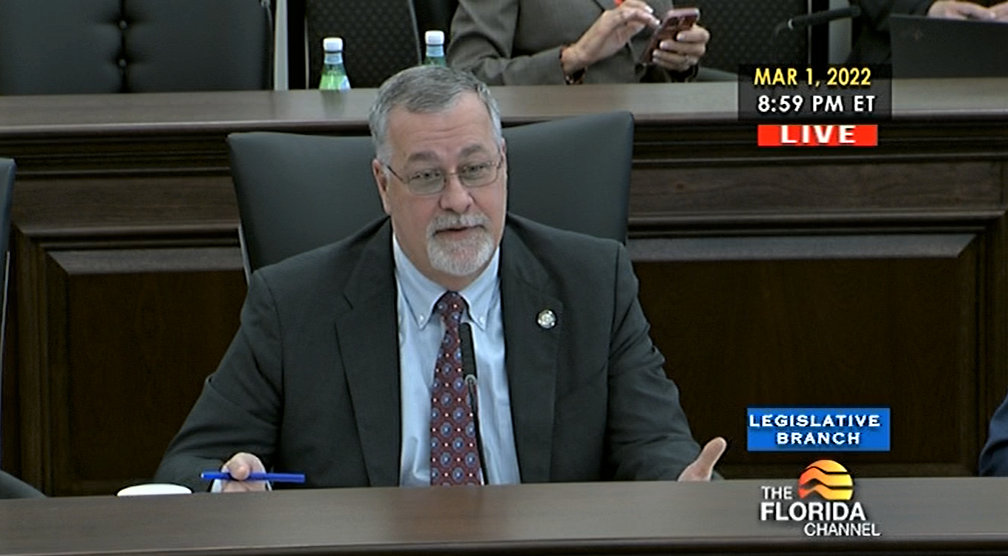 Sen. Ben Albritton, R-Bartow, is the sponsor for Senate Bill 804. He spoke during a Senate Rules Committee hearing Tuesday night. The committee approved his bill by a vote of 12-4. Image: The Florida Channel

The Florida Legislature is moving toward passing legislation that some say is designed to address the employment crisis in nursing homes.

But not everyone is on board with the proposed changes, and many believe nursing home residents will suffer.

Senate Bill 804 and House Bill 1239 would reduce the required daily hours for certified nursing assistants by 20%. That means that instead of CNAs spending two-and-a-half hours on average per day for each resident, the requirement would become two hours.

While this legislation doesn’t change the number of mandated hours for direct care for residents, nursing homes could count the time spent by physical therapists, respiratory therapists, mental health workers and others.

“This will improve quality,” she said, “by allowing that small portion of flexibility from the 2.0 — to allow that flexibility of bringing in the professional that is needed for the person-centered care according to their care plan.”

CNAs provide essential care for residents under the supervision of a licensed nurse.

Legislators pushing the change say the bills are a compromise addressing the staffing crisis in nursing homes.

Industry representatives like Steve Bahmer, president and CEO of LeadingAge Florida, say the problem is real.

“My members have said often if there were CNAs out there to hire you better believe we’d be hiring them,” Bahmer told the Senate committee. “We just can’t find them. And the result is that our members are now taking beds off line because they simply can’t staff them. (12)

Colley, the veteran CNA, says you can solve the staffing crisis with better pay and health insurance.

Twenty-one years ago, Florida reformed nursing home standards and set the CNA requirement at nearly three hours a day. In 2007, that requirement was lowered to the current 2.5 hours.

At first, nursing homes with a hundred residents needed 36 full-time CNAs working in a day. The new legislation knocks that down to 25.

Lynn Hearn with the Florida Long-Term Care Ombudsman Program is concerned that lowering the number of required CNA hours will make things worse. Hearn paints a grim picture of nursing home neglect from the thousands of complaints they receive.

She says a woman visiting her parents last week found her dad with sores on his wrist from a restraint. His clothes had not been changed and he was put to bed with his shoes on.

Her mom was half out of her bed with a full diaper and excrement on her socks and bedding. Both had dirty feet and long toenails.

“This is very representative of what we are seeing,” Hearn said. “So it’s crystal clear to everybody we need more CNAs. So, what we don’t need to do is pretend on paper that we need less.”