As Ferguson Unraveled, The World Found A New Way Of Watching 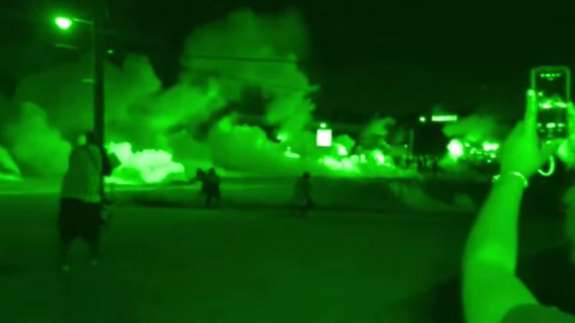 When protests over the shooting of Michael Brown turned violent in Ferguson, Mo., livestreaming videos showed Americans what they couldn't see on TV.

In Ferguson, Mo., on Monday, Michael Brown, the unarmed 18-year-old shot by a police officer will be buried. Beyond the traditional media outlets, many members of the public may be able to watch the event live over the Internet.

Some say Ferguson has been a turning point in the U.S. for live streaming of news events. As the demonstrations unfold there over the last two weeks, a few million people watched the events in real time.

Among them was Jeanne Anderson, a first-grade teacher living in a suburb of of St. Paul, Minn. She’s a big Twitter user. One night she clicked on a link from a friend to a live video stream coming from the streets of Ferguson.

“There was an absolute wall of police and they were all wearing body armor,” she recalls. “They held clear Plexiglass or whatever shields in front of them and helmets. And they are slowly, slowly creeping down the street. Your heart starts pounding, because this isn’t a TV show. This is live.”

As the evening unfolded online, the confrontation came.

“Then the tear gas canisters start going off, and they’re getting hit with rubber bullets,” she says. “The cameraman got hit. And I’m watching this live and of course, there’s nothing I can do about it.”

The cameraman who got hit is Mustafa Hussein, the founder of Argusradio.com. Argus Radio is a four-person volunteer Internet radio station in St. Louis that had purchased some equipment to livestream local bands. When the protests broke out. Hussein decided to use the equipment to stream the demonstrators.

“We were only getting bits and pieces from the major networks,” he says. “And I knew we had the ability to share what I could see firsthand since I happen to be right here in St. Louis.”

The first night he started livestreaming from the streets of Ferguson, some 1.3 million people tuned in to watch. Also among them was Jen Sanford, a 30-year-old who lives in Chicago and found a link to the Argus Radio livestream on an Internet page.

“I was actually able to see firsthand the police lining up the protesters,” she says. “It was very shocking to me to [see] firsthand what was going on — and to see what I didn’t really see was being reported in some of the more major news outlets.”

Sanford was up until 2 a.m. some nights watching the livestream and able to see small encounters between police and civilians, exchanges among the protesters — the things that can’t fit into a shorter story. Jeanne Anderson had a similar experience.

“What I saw was these were human beings — teenagers and grandparents and little children that are walking and trying to make their voices be heard,” she says. “The fact that they come back night after night, after night, after night, says that yes, they’re protesting the terrible tragedy, but there’s a lot more behind it or they wouldn’t keep coming back.”

Argus Radio was streaming its feed using the technology of a company called Livestream. Its CEO is Max Haot, who says Argus set a record for them. “The audience and the rapid spread of the link and the speed at which the audience has built up is unprecedented,” he says.

Other people in Ferguson downloaded his company’s app and sent their own streams. Live Stream’s service has averaged 2 million viewers a night for streams from Ferguson.

Haot says that kind of constant media attention also caught moments on tape that might otherwise have been missed — like the night a St. Louis Police Officer pointed a rifle at Argus’s Hussein and another journalist.

That footage found its way to YouTube and major media outlets. Eventually, the cop was suspended indefinitely. “I think it really helps change the world in the way that people have a direct access with a breaking news event and (they) can make their own judgement,” Haot says.

Live streaming has already taken off for other types of events — video gaming is among the most popular; there have been staged events like Red Bull’s streaming of the highest sky dive jump on record.

Outside the U.S., another live streaming company, UStream, says that some 50 million people watched the demonstrations in Kiev, Ukraine.

James Mcquivey thinks now that the technology is cheap and ubiquitous, we’re likely to see more people stream major news events. “Nothing is as fulfilling as being right there and watching it happen,” he says.

“You know the Civil War actually launched with people getting in their carriages and going out to the battlefield and sitting on a hill and having a picnic while they watched the early battles.:”

Jeanne Anderson, the Minnesota first grade teacher, says there’s been something different about watching a stream from someone in a community.

“Sometimes all you need to see is a look on Mustafa Hussein’s face, that says a lot,” she says. “At times he just looked so discouraged, at times bewildered, that this is happening in his city.”

But, in the end, it’s not clear if live streams will really help us all get closer to the true facts around a major news event.