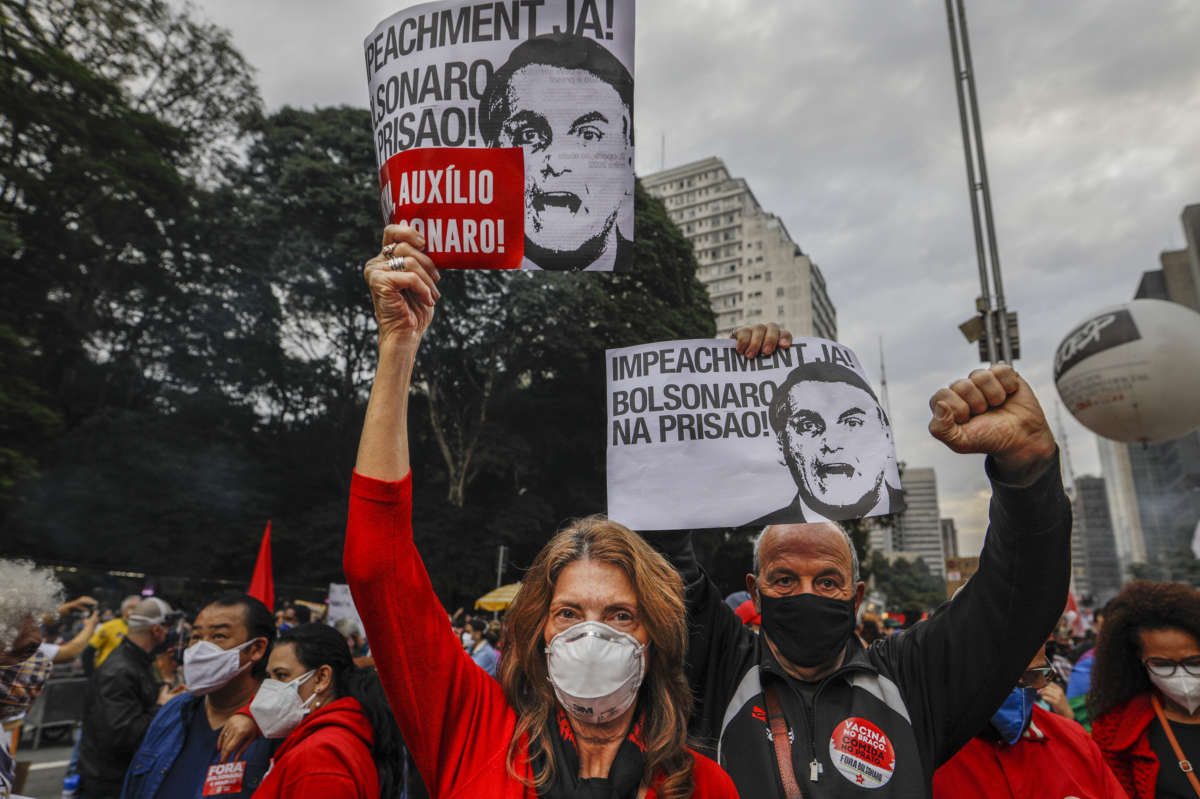 Demonstrators hold signs that read in Portuguese: "Impeachment now! Bolsonaro in prison" during a protest against Brazilian President Jair Bolsonaro and his handling of the COVID-19 pandemic, in Sao Paulo, Brazil, on Saturday.
Image credit: Marcelo Chello

RIO DE JANEIRO (AP) — Anti-government protesters took to the streets in more than a score of cities across Brazil on Saturday as the nation’s confirmed death toll from COVID-19 soared past half a million — a tragedy many critics blame on President Jair Bolsonaro’s attempt to minimize the disease.

Thousands gathered in downtown Rio de Janeiro waving flags with slogans such as “Get out Bolsonaro. Government of hunger and unemployment.”

“Brazil is experiencing a great setback. The country was an exemplary country for vaccination in the world. We have widely recognized institutions, but today we are in a sad situation,” said Isabela Gouljor, a 20-year-old student who joined the protest in Rio.

Similar marches took place in at least 22 or Brazil’s 26 states, as well as in the Federal District, Brasilia. They were promoted by left-wing opposition parties who have been heartened by Bolsonaro’s declining poll ratings with next year’s presidential race looming.

“Get out Bolsonaro, genocidal,” yelled Rio demonstrators, some of them wearing t-shirts or masks with the image of former leftist President Luiz Inacio Lula da Silva — who leads Bolsonaro in some polls.

In São Paulo, protesters dropped red balloons as a tribute to the victims of the virus.

Bolsonaro’s supporters have taken more often to the streets over the past month, in large part because many agree with his dismissal of restrictions meant to stifle the coronavirus and anger that lockdown measures have hurt businesses.

Critics say such messages, as well as Bolsonaro’s promotion of disproven treatments such as hydroxychloroquine, have contributed to the soaring death toll and a sluggish vaccine campaign that has fully inoculated less than 12% of the population. The country of some 213 million people is registering nearly 100,000 new infections and 2,000 deaths a day.

“For the leftists, putting their followers in the streets is a way of wearing Bolsonaro down for the election,” said Leandro Consentino, a political science professor at Insper, a university in Sao Paulo. “But at the same, time they are contradicting themselves and losing the discourse of maintaining health care, because they are causing the same agglomerations as Bolsonaro.”

Saturday’s marches came a week after Bolsonaro led a massive motorcycle parade of supporters in Sao Paulo, though his allies and foes differ dramatically on the size of that event.

“Bolsonaro needs to show that he maintains significant support to give a message of strength to those who are investigating the actions of his government in Congress,” Consentino said.