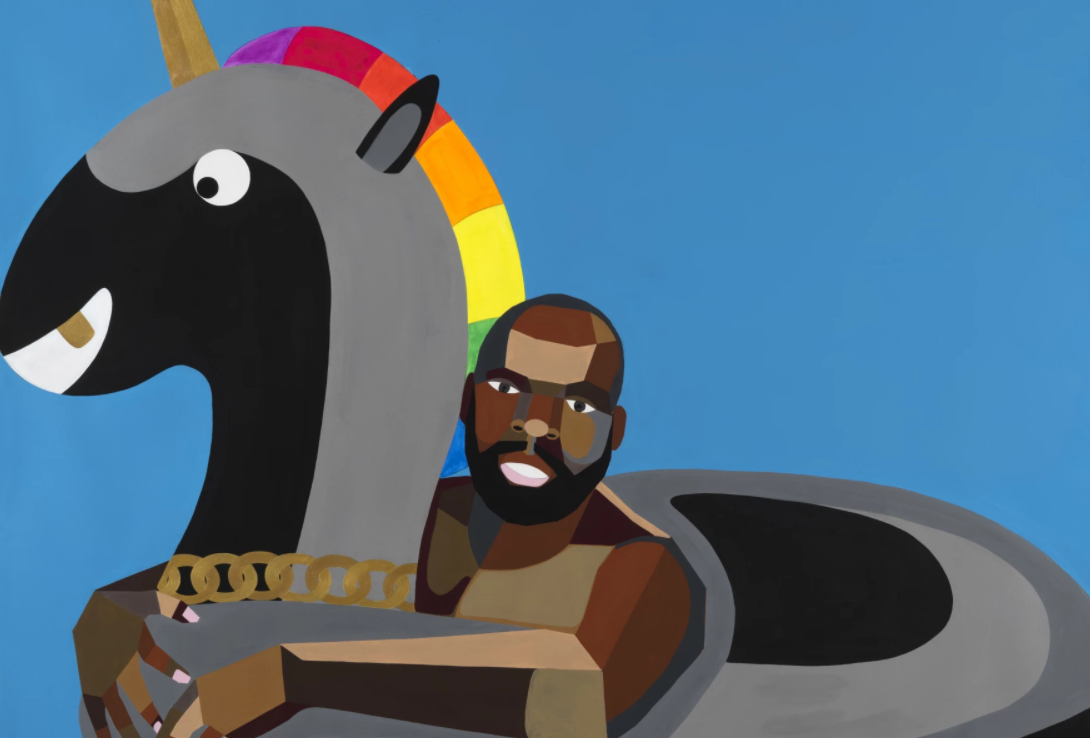 Adams captures the often overlooked aspects of Black life in his newest exhibition “Buoyant” now on view at the Museum of Fine Arts St. Petersburg.

The exhibition features the artist’s series Floaters, a collection of boldly colored portraits of Black people floating in pools and in various states of rest and play. Taken together, the images reveal that regardless of the struggles Black people face, they still need to connect and replenish.

In the gallery, the vivid large-scale paintings are complemented by beach chairs and giant pool floats.

In the midst of headlines about racial justice and equality for Black Americans, Derrick Adams uses his art to celebrate the Black image and spirit and what the artist has called “a testament of perseverance.”

WUSF’s Cathy Carter recently spoke with the artist from his studio in New York about stereotypes, representation, and Black joy. 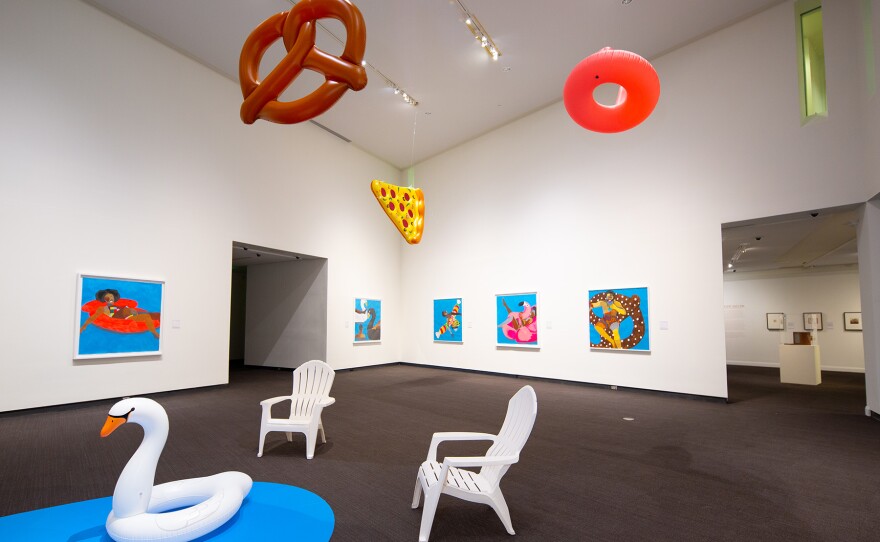 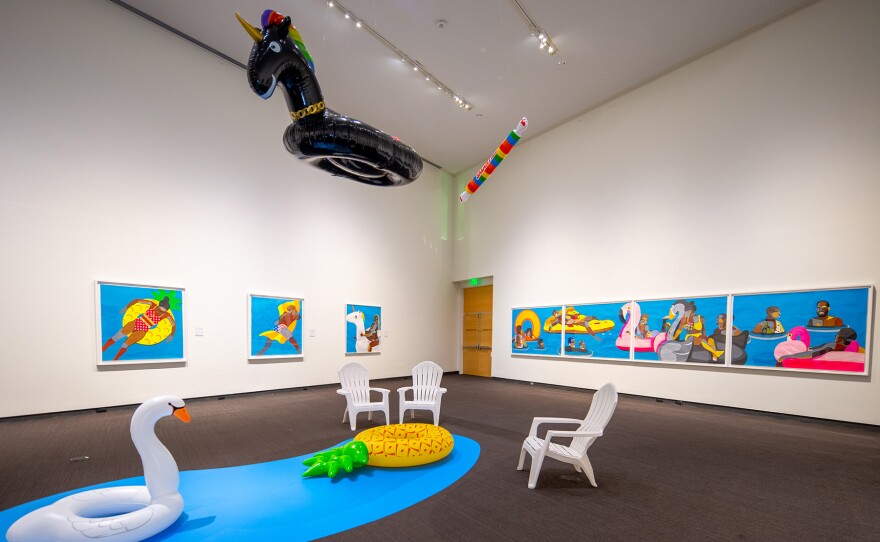 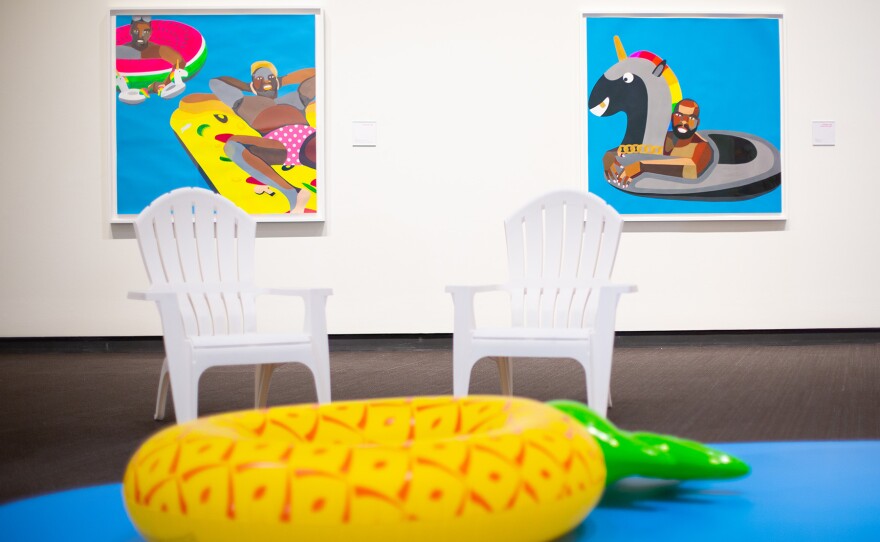 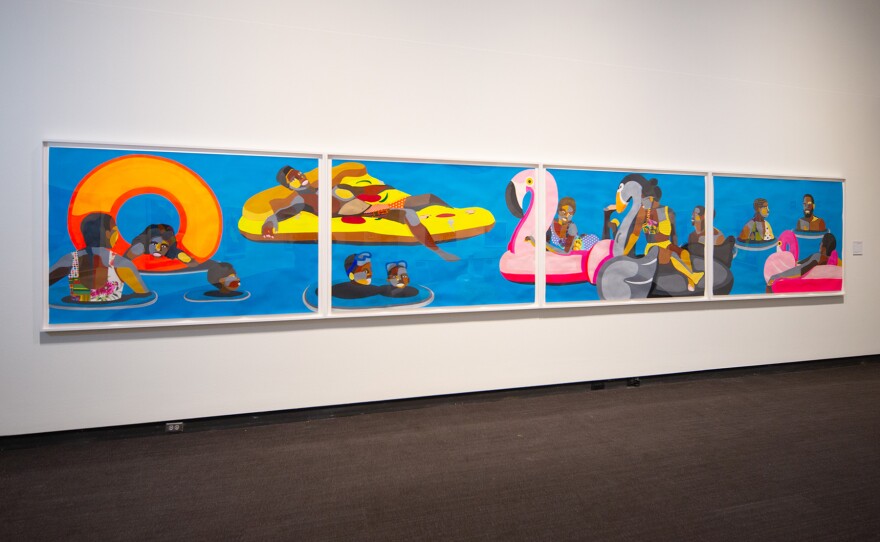 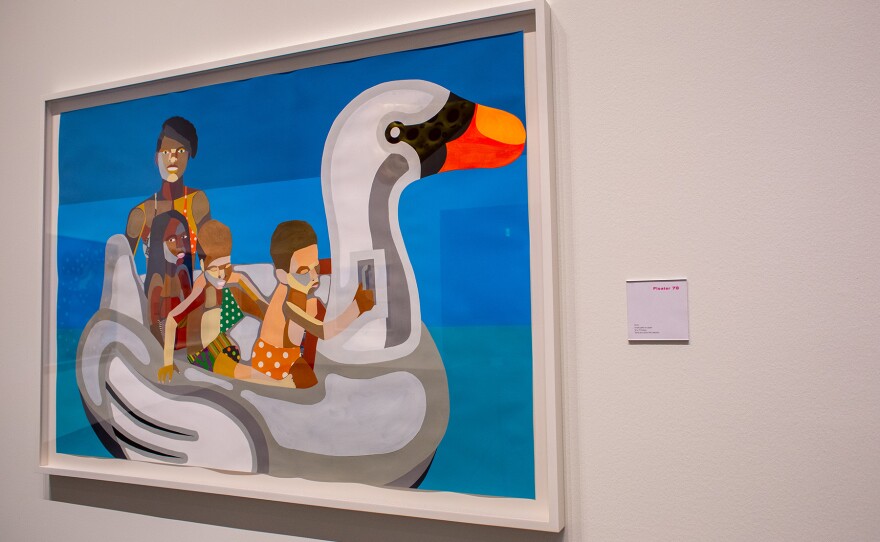 Derrick, one of the inspirations for this show was a 1967 Ebony Magazine article. It was a photo spread that showed Martin Luther King Jr. on vacation with his family. That got you thinking creatively and you hashtagged the word floaties on Instagram. I understand, you didn’t see any Black people represented?

Yeah, as an artist I was looking for source material and just a muse for a new project and I was really interested in this inflatable object, because I felt it was such an American icon. So thinking about that in the studio, I became really interested in it and how that could somehow be used as a prop for representing a portrait, and I didn’t see any Black figures on floaties.

These leisure and relaxation scenes and Black people just being joyful, is so often unseen and you’ve created a brand new hashtag, ‘Black radical joy’, can you talk to us about that?

Most people of color need to have these times of reflection and family and I don’t think that we always see it as a really important time to replenish and to regroup, because I think that politics is something that we can never avoid. So it’s not like we can be absent from any political unrest. I just feel like the times between those things, are something that we should also acknowledge as also being political. And radical joy to me, I feel representing that in art and in life, it can be actualizing for people to see that.

And you’ve said as a community, Black people don’t need to be reminded of hardship. It’s on your TV channel, 24 hours a day, seven days a week.

Exactly. I believe that, you know, although it’s important to allow creatives to represent oppression and unrest and social injustice, I just think that for the most part, that work is for us, but it’s also mostly for people outside of our culture to understand certain aspects of our culture. But for me, as an artist, what I enjoy about art is the ability to capture things that are not necessarily topical, and imagine circumstances and situations that are not so foreign from us, things that we participate in all the time that we may not think of as being as significant as we should think of it as, because we wouldn’t be able to exist in a way that we exist, if we were constantly fighting against things all the time. You know, even soldiers in battle have days off where they have leave just to regroup and get their thoughts together. We’re constantly pushing up against things visible and invisible. So in order for us to even deal with that, we have to figure out, or at least acknowledge, that the time we spend away from that and enjoying each other is a significant reason why we’re able to keep moving forward.

And to be clear, you’re not saying that one part of the story isn’t important. What you’re saying is that as an artist, you are drawn to what stories haven’t been told, and you think about what you can reveal that hasn’t been shown.

Yeah. How can we balance the narrative? So you know, the next generation, when they look at these times that we’ve been living in, they won’t see themselves in this kind of victimized portrayal through visual culture. They will also see themselves in the way that they envision themselves and the way they actually feel about themselves. And I think that works that deal heavily with the politics of oppression and injustice, cast a certain image of not having hope, and those things are significant to see in art. But when people ask me questions about my work, I say the reason I make what I make is because other artists make what they make, so there is no need for me to make that. I think my position is that we’re both having a conversation that’s equally valuable for the next generation to see and debate.

Derrick Adams Buoyant is on view now. Timed-entry tickets must be purchased through the museum’s website in accordance with current safety measures.

The MFA will also host a Zoom discussion with the artist next month.

Derrick Adams will join Dr. Gretchen Sorin, author of Driving While Black: African American Travel and the Road to Civil Rights and Cynthia Wilson-Graham, co-author of Remembering Paradise Park: Tourism and Segregation in Silver Springs; in a conversation moderated by MFA Curator of Contemporary Art Katherine Pill, on October 15.