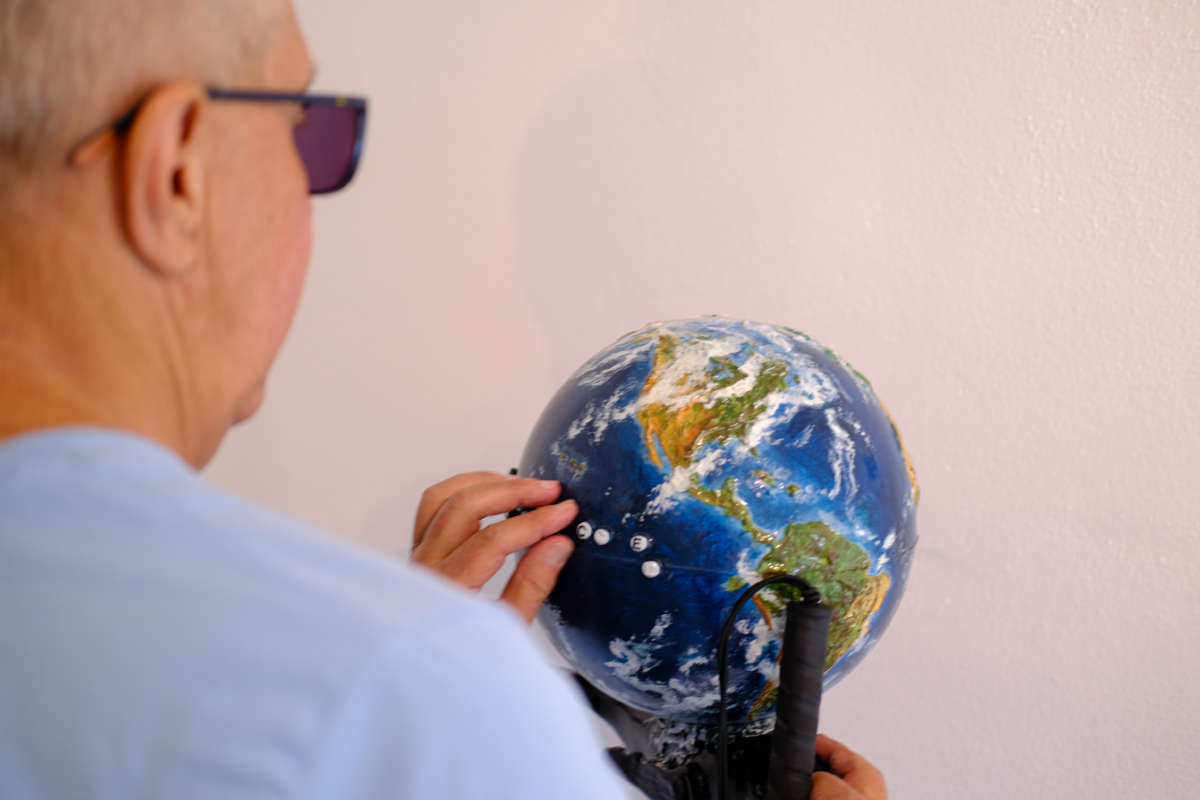 Tom Babcok, a museum patron, is reading a word in Braille spelling “believe” across the sculpture at the Casselberry Sculpture House. ReVision debuted on Sept. 4th with inclusive art that both unsighted and sighted patrons could enjoy.

A museum in Casselberry is breaking a long-held rule at most museums; NO TOUCHING!

ReVision is an inclusive sculpture exhibit catering to people with visual impairment. It allows them to experience the exhibit through touch while also allowing people with sight to either use their eyes or put on a blindfold and feel their way through.

Artists in the exhibit were given two criteria– make something that could withstand manipulation and daily sanitation. Artists incorporated textures and hard materials like aluminum, granite or hard resin.

Maurine Park is an assistive technology instructor at Lighthouse of Central Florida. She is also visually impaired. She says it’s a big deal for unsighted and sighted people to share these experiences on an equal platform.

Tom Babcok is standing on a tactile surface allowing him to know exactly where to stand to appreciate the art. The Florida Sculptures Guild and Lighthouse of Central Florida worked together to make the space safe for people with visual impairment.

Park says the goal is for everyone to actually enjoy the exhibit.

“Art museums are not a fun place to go because it’s always hands off,” Park says. “The FSG stepped up and said, no, we’re not gonna do that, we want you to get your hands on this stuff, we want you to touch this stuff.”

Park worked with the FSG to help nourish a concept that took two years to bring to fruition. Susan Sturm Menand is president of the FSG. She recalls the first exhibit they showcased back in 2016, called “Sight Unseen.”

Menand says that inclusivity is what drives her and other members of the FSG to find ways to make the exhibit possible. Menand believes people without sight are often forgotten by society.

“If I change one person’s opinion and make them more aware, then we’ve had a successful show,” Menand says.

Arlene Freiburg-Vivaldi is FSG’s vice president. She’s encouraging even people with sight to put on a blindfold and interact with the sculptures just as a person who is visually impaired.

“Once you do, it starts making everything human and we find that we’re more inclusive,” Freiburg-Vivaldi said.  “Because, although there are people that are visually impaired, they’re still people, if you’re sitting beside them, say hello, [and] now they get to be in a museum with you and I think that’s the coolest thing ever.”

The exhibit runs through December 30th at the Casselberry Sculpture House in Casselberry.

This story is part of “Sounds of Central Florida,’’ an ongoing series and joint partnership between WMFE and UCF’s Nicholson School of Communication and Media.