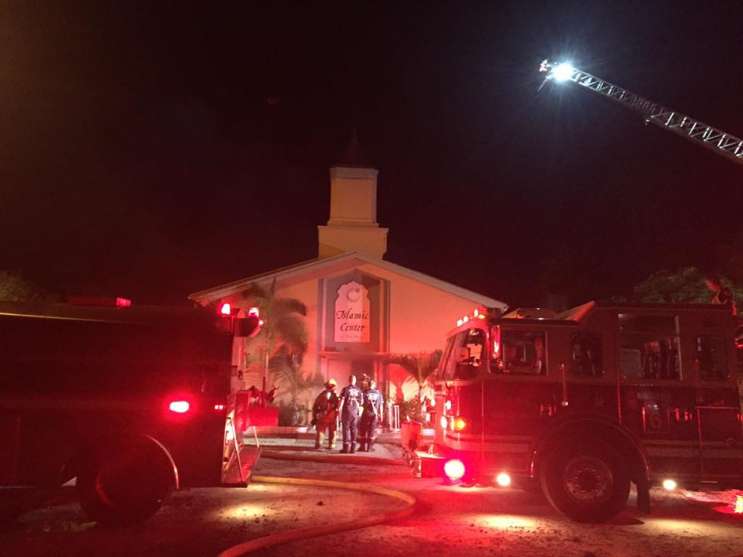 The Council on American-Islamic Relations is calling the overnight fire at a Ft. Pierce mosque a hate crime. St. Lucie County Sheriff’s Office is investigating the fire as arson.

The Pulse nightclub shooter worshiped at the mosque. CAIR-Florida Spokesman Wilfredo Ruiz said the Ft. Pierce Islamic Center is worried about its worshipers.

“It may well be done with people inside because less than an hour before it was set ablaze, there were people inside that mosque,” said Ruiz.

Ruiz said incidents at the mosque have been escalating starting with hate-filled voicemail following the Pulse massacre.

Major David Thompson is with the sheriff’s office. He spoke outside the center.

Officials plan to release the video and ask the public to help identify the individual.

Thompson said investigators are searching for a motive. He was asked if he thought Sunday’s 15th anniversary of the 9/11 attacks could be a factor.

“We all know the implications of the date and the time of year that this is – the 9/11 anniversary,” he said. “Is that related? I would not want to speculate, but certainly that is in the back of our minds.”

Monday also marks three months since the June 12th mass shooting at Pulse nightclub, during which 49 people were killed and at least 50 were injured.

Pulse shooter Omar Mateen died in a fire fight with police after a hostage standoff at the club.