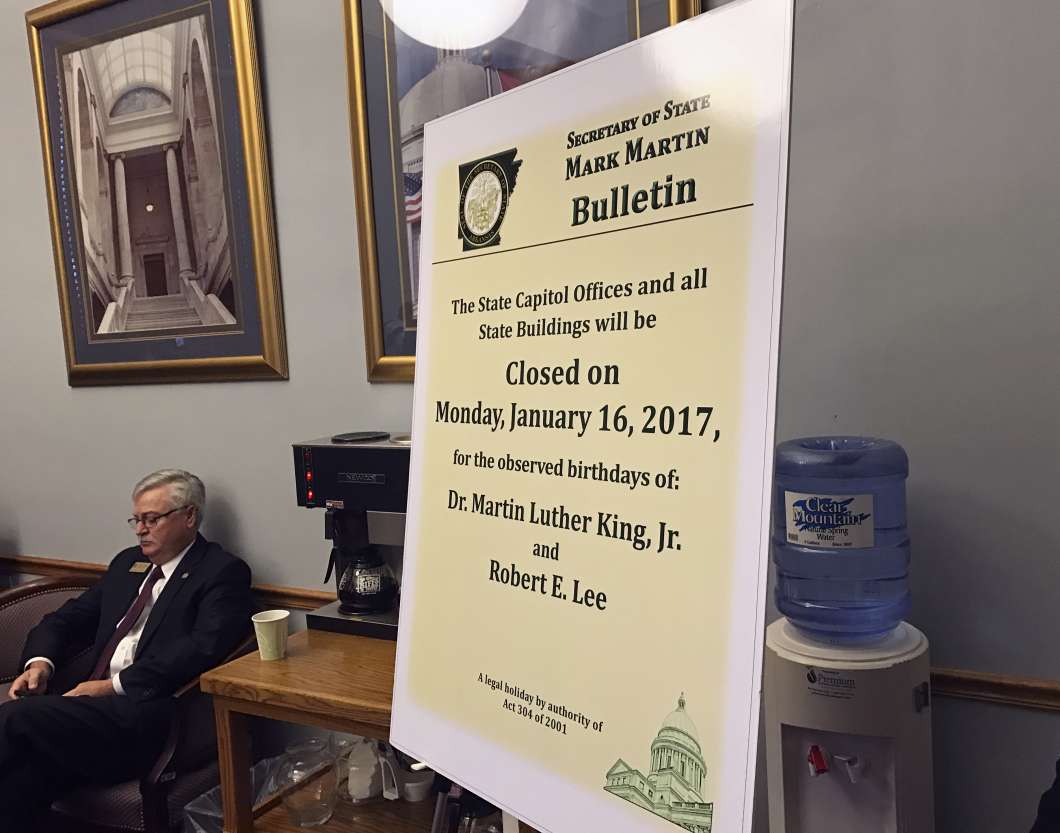 With the stroke of a pen on Tuesday, Arkansas Gov. Asa Hutchinson is expected to separate a holiday that has for decades celebrated both Martin Luther King Jr. and Gen. Robert E. Lee in the state.

Under the bill that Hutchinson says he’ll sign into law, King will have the third Monday of January entirely to himself, as dictated by federal law; Lee will now be commemorated in a state holiday on the second Saturday of October.

If the civil rights icon and Confederate general would seem to make for rather odd bedfellows, the state’s Legislature has come to agree. Member station KUAR reports that by a 66-11 vote Friday — with 18 members not voting and five voting present — the Arkansas House of Representatives passed a bill to “eliminate the dual status of the joint holiday,” and to “specify the teaching of content related to Dr. Martin Luther King Jr. in conjunction with the corresponding holiday.” The Senate had already approved the change.

In a statement, Hutchinson commended the passage of the bill, which was co-sponsored by state Sen. David Wallace and state Rep. Grant Hodges, both Republicans. According to KUAR, the governor thanked lawmakers for the bipartisan effort:

“The support for a separate holiday to recognize Martin Luther King far exceeded my expectations and speaks well of the General Assembly and our state. This bill was one of my priorities, and I was honored to testify for it in both Chambers. I look forward to having a signing ceremony that emphasizes the historic dynamic of this new day.”

Arkansas has celebrated Lee’s memory since 1947 and King’s memory since 1983, when President Ronald Reagan signed a law enacting a federal holiday for the reverend. Their respective holidays were combined in 1985 under Bill Clinton, who was then governor of the state.

As KUAR notes, not every lawmaker was in favor of putting the two asunder.

“We are taking Robert E. Lee and we are putting him in the basement and we are acting embarrassed that he ever existed,” Republican Rep. Jana Della Rosa said during debate before the bill’s passage. “It’s no different than if we went out and we took that statue of the Confederate Soldiers and put it down in the basement and said nobody’s going to look at it again.”

Still, Friday’s vote brings Arkansas in line with much of the rest of the country. When the bill is signed into law Tuesday — after the originally scheduled signing ceremony was bumped from Monday — Arkansas will leave the exclusive club of states that celebrate both men on the same day. Without Arkansas, that group dwindles just to Alabama and Mississippi.

“It’s an opportunity to show the citizens of our state and the whole country that we are capable of coming together,” Hodges said, according to the Southwest Times-Record, “not out of political correctness or any other silly reason, but out of respect and out of mutual understanding.”