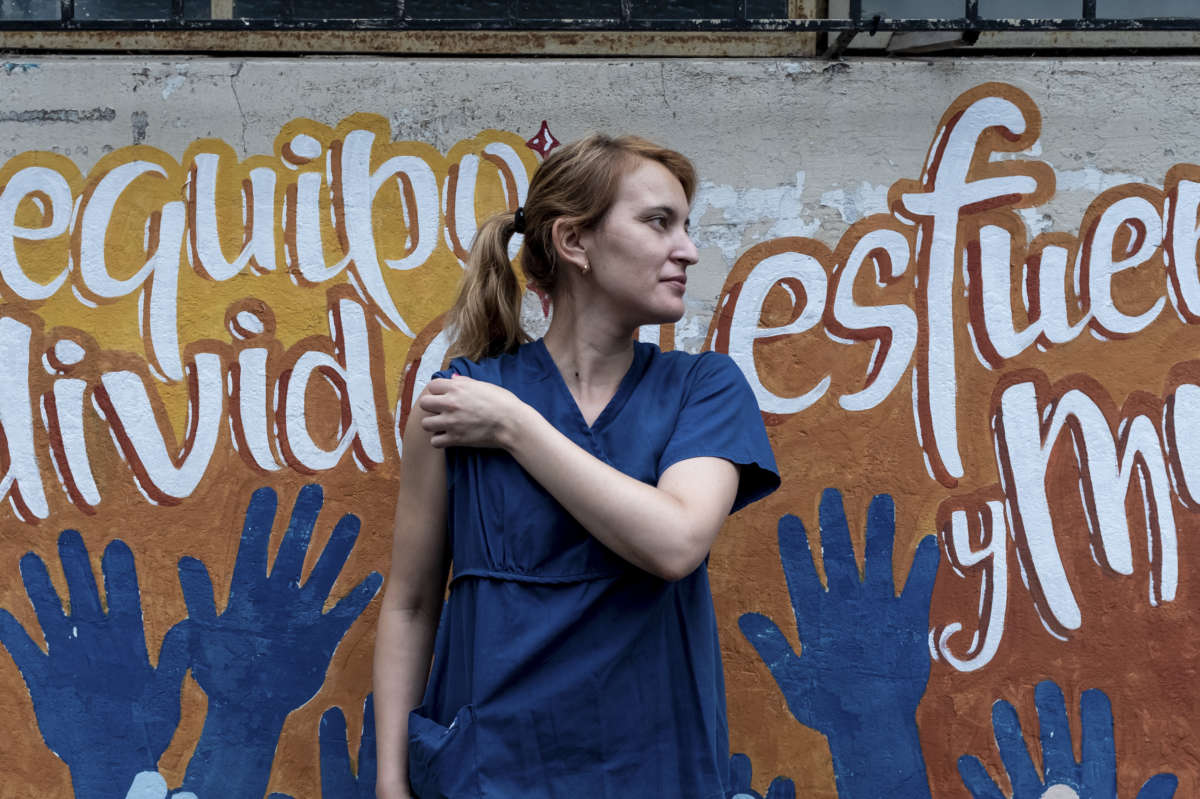 Maria Laura Niz, from the San Martin Hospital, in La Plata, Argentina, was nervous about getting vaccinated. But she's more worried that without the vaccine the pandemic could get worse.

As nations around the world scramble to start vaccinating against COVID-19, many countries are finding it difficult if not impossible to get the vaccines they want.

Case in point — Argentina. President Alberto Fernández promised to start vaccination campaigns in the South American nation before the end of 2020.

They managed to hit that goal but just days before the New Year dawned — and not exactly as they’d hoped. Argentina tried to position itself to get early access to a vaccine. It hosted multiple vaccine trials for multiple pharmaceutical firms. It negotiated pre-purchase contracts with several pharmaceutical companies. It arranged to be the primary manufacturer of AstraZeneca’s vaccine in Latin America.

Yet as nations in Europe and North America started rolling out vaccines, the only doses Argentina could get their hands on were of the controversial Sputnik V from Russia. Russia’s Health Ministry, which is involved in developing Sputnik, authorized its use before it had even gone through clinical trials. Full public data on the ongoing trials still hasn’t been released. No major regulator in North America or Europe, including the World Health Organization, has signed off on Sputnik yet.

Nonetheless, local broadcasters breathlessly covered the Aerolíneas Argentinas flight that took off to pick up the first 300,000 doses of the vaccine purchased from Moscow. They declared it “the Flight of Hope.”

Argentina is now vaccinating tens of thousands of frontline health-care workers with Sputnik.

Paola Osman is one of them. She just received the inoculation and says she’s not worried about Sputnik.

“The truth is that it’s very important for us that the vaccine has been brought into our country,” says Osman, who’s in her second year of residency at the Hospital San Martin in La Plata just outside Buenos Aires. Osman says in addition to the death and suffering from COVID that she sees on her wards every day, she also hasn’t visited her own parents for 6 months. This vaccination campaign, she adds, feels like it could be a turning point in the pandemic.

To understand Argentina’s rush to authorize the Sputnik V vaccine you have to look at how hard the pandemic has hit. The country had one of the most severe lockdowns on the continent, even using police to force people to stay at home. Yet the nation has ended up with a COVID death rate even worse than neighboring Brazil. The country of 45 million people has already lost more than 85,000 people to the disease.

Maria Laura Niz is a health-care worker in the intensive care unit of the Hospital San Martin. She says the last year caring for COVID patients has been devastating.

“It’s affected me a lot — the loss of loved ones, of patients we’ve had, and more than anything the deaths that we’ve seen.”

She also just got the jab of Sputnik V last week. Standing outside the hospital where she works, Niz says the tragedy of this pandemic will stay with her the rest of her life.

“Many people have suffered a lot of sadness,” she says. “It’s very sad what we are experiencing.”

And the pandemic in Argentina shows no sign of subsiding.

Since mid-December cases have been surging back toward a peak they hit in October — the opposite of what health officials were predicting would happen as the South American nation moves into summer and fewer people are cooped up indoors.

Adolfo Rubenstein, the former minister of health for Argentina, says the government’s harsh lockdown failed to stop the virus yet wrecked the economy.

“The consequences are really, really impressive,” he says. “We are suffering even more than the financial crisis in 2001, 2002.” That financial collapse two decades ago is known as the Argentine Great Depression.

Rubenstein, who is now the director of the Center for Implementation and Innovation in Health Policies in Buenos Aires, says the problem is that the government has run out of options. The public won’t accept another tight lockdown. So officials are pinning their hopes on getting a vaccine as quickly as possible.

But Rubenstein says they’re in a difficult position. “We are at the mercy of pharmaceutical companies and foreign governments,” he says.

Juan Cruz Diaz with the Americas Society and Council of the Americas, based in Buenos Aires, says friends in the U.S. tell him Argentina is crazy to make a deal with Russia for the vaccine. “But that criticism is tainted by geopolitical views that countries like Argentina can’t afford to have,” he says. “Unless the United States comes with an aid package and says, ‘Well, we are sending 50 million doses of the Pfizer and Moderna vaccine to you.’ If that would be the case, probably Argentina could have the option of not getting the Sputnik. But that’s not going to be the case.”

The supply of Sputnik vaccine Argentina has received so far is tiny … less than enough to vaccinate 1% of the adult population. And as Argentina scrambles to secure millions of additional doses from Sputnik’s manufacturer and other companies, it’s competing with just about every other country in the world.

Some of the public and the press in Argentina continue to be skeptical of the Sputnik product.

Galit Alter is a professor of medicine at the Ragon Institute of MGH, MIT and Harvard who studies vaccines. She says Sputnik V may be a perfectly good option for Argentina. It is a fairly conventional DNA vaccine. Unlike the revolutionary RNA-based products from Pfizer and Moderna, Sputnik is part of a class of vaccines built around an adenovirus.

“What we know about these vaccines is they are incredibly safe. They are not virulent and they are wonderful delivery platforms for vaccination,” she says.

This type of vaccine is also relatively easy and inexpensive to produce. It doesn’t require super-cold temperatures for storage. The Russians have basically produced a workhorse of a vaccine.

“The concern is that we have not seen any of the raw data from the Sputnik trials,” she says. “And that is what is really incredibly scary.”

Officials in Argentina, however, say the Russians showed them enough data to convince them Sputnik was safe and effective. They’re also tracking side effects from the inoculation campaign and plan to continue to monitor Sputnik V as they roll it out. The Russian Direct Investment Fund, which is marketing Sputnik abroad now, says it plans to publicly present detailed data on the product next month in an application for approval from the European Medicines Agency.

Meanwhile the vaccine efforts in Argentina are continuing. At the Hospital Lucio Melendez in Buenos Aires, 37-year-old nurse Iván Martín Burnes got vaccinated this week with Sputnik. He says he’s heard all the debate in the press about the Russian vaccine.

“Some people say it’s effective, others say that it’s not effective or that they’d prefer another vaccine,” he says. “Well, this is the one we have here in the country right now.” And he says he trusts the government did its due diligence in examining the vaccine before authorizing it.

Dr. Andrea Mangano, head of virology at the Children’s Hospital Garrahan, a public hospital in Buenos Aires, just finished getting all of her team vaccinated. She was the last worker on her unit to get the shot.

This has been an incredibly hard year for all of her staff both in terms of the workload and the emotional burden of caring for COVID patients, she says — and the arrival of Sputnik offers hope that things are changing.

“We are really very happy,” she says. “Now we can face this new year with a new perspective.”