Are you ready for your close-up? Hallmark cards now come with video greetings 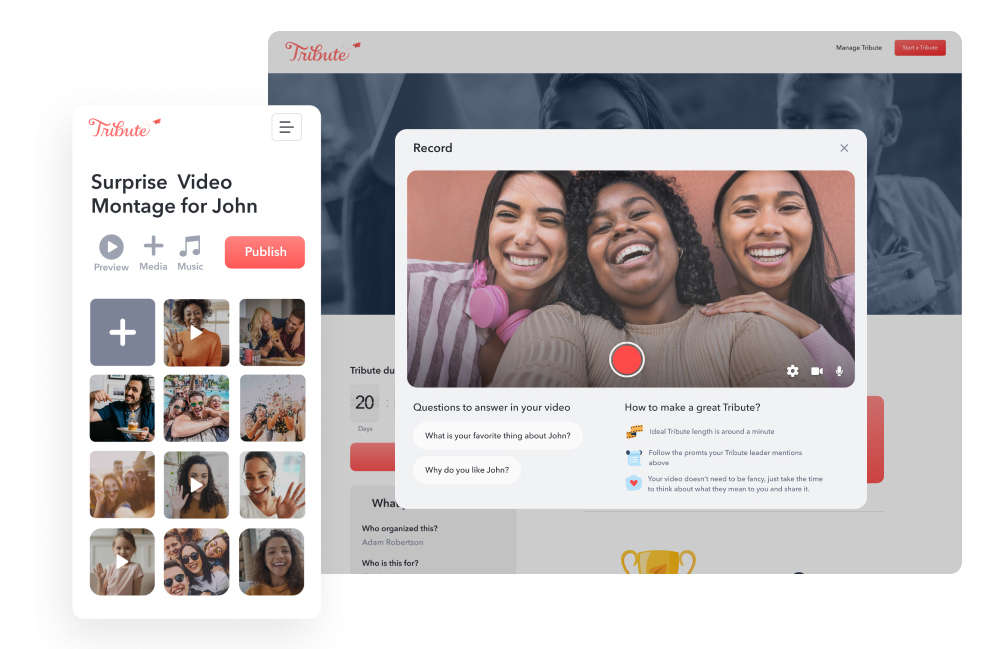 Tribute says it was the first company to offer what the industry calls "digital expressions," in 2015. Its montages run from $29 for a self-edited version to a full-service option for $100.

Hallmark is famous for putting its customers’ feelings into words, but the message inside the company’s new video greeting cards comes straight from the sender. The service lets users upload personal videos made by family members, friends or anyone else they choose to invite, then Hallmark edits them together with music and graphics.

“It just makes for something that’s unforgettable,” says Krista Masilionis, Hallmark’s global innovation director. “We’ve been around for 110 years. I want us to be around for another 110 more, so we’ve got to be there as the way people are connecting changes, and digital is how they’re doing it.”

The Greeting Card Association says the tradition of exchanging messages of goodwill goes back to ancient civilization. These days, more consumers are getting accustomed to connecting on camera, especially since the start of COVID-19. Banking on that trend, Hallmark is the biggest brand yet to start packaging video greetings for a price – $4.99 for the digital-only version that can be shared by text or email. For a dollar more, the sender can choose a traditional paper card that arrives by mail with a code inside for the recipient to scan with a smartphone to watch the greeting. Either way, the final product expires in six months but can be downloaded for keeps.

The industry term for these greetings is “digital expressions” and a handful of smaller companies beat Hallmark to this still-emerging market. Tribute says it was the first, starting in 2015. Its prices range from $29 for a DIY version to $100 for the full service “concierge” option, which includes all the editing, plus perks like email reminders for contributors if the sender sets a deadline.

In Tribute’s first five years in business, it sold about a million montages but that number spiked to five million and counting after the pandemic started. “There’s been this absolute, you know, shift in consumer behavior over the past two years in the pandemic, where people are now all of the sudden comfortable, for better or worse, on video,” says CEO Andrew Horn.

Some more than others, if procrastination is any indication – Tribute’s data show that 80% of people invited to submit videos don’t submit them until the day they’re due, or even after. “It does tend to take more effort,” Horn acknowledges. “But now people are also starting to see that, like many things in life, some of the most rewarding things that we do are those that are challenging, and so people are embracing that challenge because they’re seeing that the impact is actually profound and legitimate.”

Horn adds that Tribute tries to frame its requests for videos as invitations. The potential for some video invitees to feel obligated to participate troubles Dr. Bernie Hogan, a sociologist and senior research fellow at Oxford University’s Internet Institute. “What’s bad is when that is an inorganic process – when that process is fostered or focused by social pressure or social convention.”

The final product might not reflect the amount of time and effort each video took to make, Hogan adds, from choosing the right background and deciding what to say, to recording multiple takes. “The more it’s boxed by somebody else’s parameters, the less it feels sincere and the more it feels like a performance,” he says. “You don’t want a practice that leads to resentment.”

Manners for social media might still be a work in progress, but some old-school standards apply, says author and etiquette expert Lizzie Post, who is a co-president of the Emily Post Institute and a great-great granddaughter of its namesake. When sending a video greeting, Post says the person organizing the effort should make it optional for contributors, and take the pressure off.

“Really encouraging people to not feel like they have to go over the top, to not even feel like they need to put on makeup or do their hair or something like that,” she says. “Frankly I think sometimes the ums, uhs, or the starts or the ‘Squirrel!’ moments that someone might have on camera are actually so much more exactly who they are.”

As for people who choose to take part, Post warns that when making videos, always assume they could go public and don’t rush the recording. She adds one tip from personal experience: Doing too many takes can take the fun out.