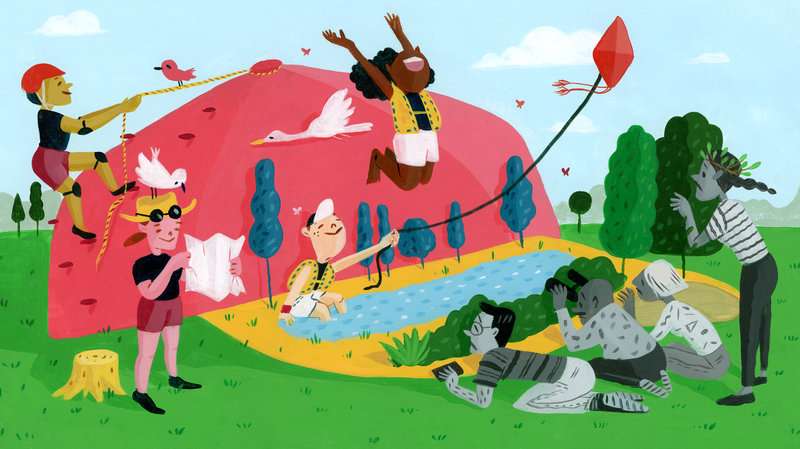 “It beeped in the envelope. That’s how we knew.”

Leslie Conrad is the director of Clemson Outdoor Lab in Pendleton, S.C., which runs several different camps during the summer. Clemson bans cellphones and other electronic devices for campers.

That makes sense. We traditionally think of summer camp as a place to swim in the lake and weave friendship bracelets, not text and play video games.

But sometimes, Conrad says, parents will give their children a decoy to turn in and a second phone to keep hidden. And, a few years ago, an 11-year-old camper was sent a cellphone in a care package. “We just held onto it and sent it back home at the end of the session,” Conrad says.

Millions of children will attend nearly 8,400 different sleepaway camps around the U.S. this summer, according to the American Camp Association, the industry’s main accrediting agency. Most limit access to technology: “Only 17 percent of ACA-accredited camps allow access to the Internet on a scheduled basis, and only 10 percent allow access to cell phones,” says Tom Rosenberg, the ACA’s director.

Researchers say that campers develop invaluable social and emotional skills from navigating friendships, facing risks and getting through bouts of homesickness — all on their own.

And as the rest of young people’s lives has gotten increasingly wired, camp provides a correspondingly rare break from that.

“It’s kind of like letting go of everything and coming to a different world,” says Alexa Sherman, 11, who is currently spending her fifth summer at Camp Echo in Bloomingburg, New York. This year, the camp’s unplugged policy got tougher; one camper was sent home for a three-day suspension after being caught with a phone. And that was just in the first week.

Many of the campers here say they miss YouTube and Snapchat, but they quickly come to appreciate the hands-on activities and in-person friendships. “It’s hard to have as much fun if you’re just looking down at a screen the whole time,” says Sherman.

The people who have the hardest time letting go, say camp directors, aren’t necessarily the campers themselves. It’s the parents of campers, the young staff members, and sometimes even the counselors’ parents as well.

Barry Garst studies youth development at Clemson University, with a focus on out-of-school learning. He said that whether you call them “helicopter,” “snowmobile,” or “lawnmower” parents, overinvolved parenting is on the verge of ruining camp.

“We started to hear from camp directors a number of years ago that parents were the most problematic areas of a camp experience,” says Garst. Not weather, not water safety, not grizzly bears. Nope, it’s parents who call daily demanding reports on their kids, who expect to hear from the camp director about every skinned knee.

Meg Barthel, the lead girls’ counselor at Camp Echo, carries a device with wifi around camp. “I have to respond to the mothers who are used to this constant communication with their daughters,” she says. How many messages a day? “Up to 100.”

Garst says thanks to mobile devices, parents today are conditioned to hour-by-hour check-ins. “The number one concern is the separation that parents feel, and the difficulty in accepting a different type of communication with their child when their child is at camp.”

Hence, the phones buried in luggage, mailed to campers, or even, he says, stitched into a stuffed animal.

Some camps address parents’ thirst for updates by posting pictures and video online.

But, sometimes that backfires, too, says Garst.

“They’ll get that the phone call: ‘Hello camp director, I was on your website and I don’t see them, are they OK? Were they sent to the hospital?'”

“They dissect every picture,” agrees Jeff Grabow, the director of Camp Echo. “It can throw a first-year parent into a spiral. Very often we’ll we’ll have children playing a game and in the background they might see their child looking up at the sky, and we’ll hear, ‘my son or daughter looks sad.'”

The research on overparenting, says Garst, shows that when parents behave this way, children’s developing independence can be stunted. The parents are telegraphing that they don’t think kids can get through tough moments on their own, and kids pick up on that attitude. “Children are not really learning how to problem-solve.”

Conrad, the Clemson Outdoor Lab director, says camp provides the perfect place to practice independence, and a digital detox is one important step. “I don’t want to say it’s an easier place to disconnect, because it’s not easy at all for this generation, but it makes a little more bearable because they’re in a group of their peers who are doing the same thing.”

What’s harder, she says, is getting the college-aged staff to disconnect. Like many other camps, Clemson Outdoor Lab has a rule that counselors can’t use phones around the campers, and that can be tough for the 18- to 24-year-olds she employs.

“We just went over this yesterday,” she said. “This week, during staff training, we’re challenging them to start leaving your phone in your cabin. Start off with an hour, build up to three hours.”

While that may not sound too tough if you were born in the 1970s or earlier, consider that over 90 percent of young adults today own smartphones and are used to checking them all day long. Data going back to 2015 showed 92 percent of college students using their phones in class, and checking phones an average of 11 times a day during class.

“I’ve seen a huge, huge difference in the last few years with these college-aged folks,” Conrad says. “I believe that [tech dependence] is real.”

Dan Mathews agrees. He is the head of Camp Twin Lakes in Rutledge, Ga. “The camper piece has been fairly easy for us. What we’re struggling with is the college kids,” he says. “They’re the ones we really have to stay on.”

And, Conrad and Mathews both say their young adult staff have helicopter parents as well, who also expect to be in constant contact. Last year, Mathews says, he got four or five phone calls from parents of staff members: “I can’t reach my child, they haven’t texted yet to say that they’re safe, they don’t like their cabin assignment, another staff member isn’t pulling their weight …” One parent complained about the poor cell phone reception in the Georgia woods.

Summer vacation is a time of growth and change. Understanding the relationship between tech overdependence and parent-child interdependence may be key to untangling it, so kids can fly free.

But Mathews is the first to admit that he shouldn’t throw stones. He has a 13-year-old daughter heading all the way to Nebraska for a weeklong theater program this summer. The program does not ban phones.

“I told her, just be aware of when you’re using it. Are you using it because you’re bored, or you’re feeling shy? Put the phone down and talk to people.”