Are Food Boats The Next Food Trucks? Don’t Count On It 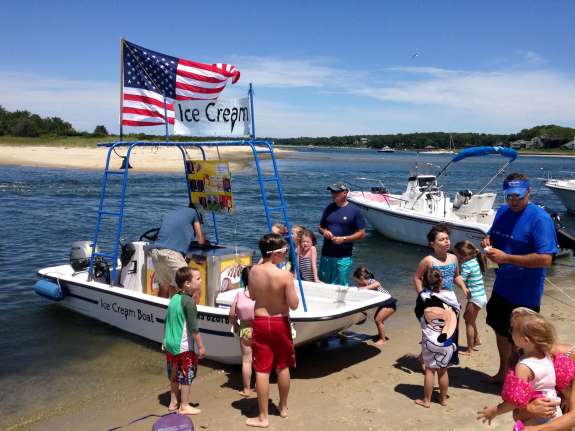 Around the country, a handful of vessels like the Ice Cream Boat peddle food on oceans, lakes and rivers.

Two rings of a bell, that is. In Cotuit Bay, near Cape Cod, those rings signal the arrival of the Ice Cream Boat. Captain Tim Titcomb maneuvers the 15-foot Carolina skiff along the sandy beaches of Sampson’s Island, where beach-goers await Good Humor Chocolate Eclairs and Popsicles.

When I first encountered the seasonal fixture of the Ice Cream Boat last summer, I thought: This is genius. It’s like a food truck, afloat.

And it turns out the Ice Cream Boat is not alone. There are a handful of vessels around the country peddling food from oceans, lakes and rivers.

Boaters and sandbar-bathers alike can get their lunch grilled on food boats like Burger Buoy in New York and Burger Barge in Oregon. Swimmers can cool down with a frozen treat from Bay Ice Cream in Panama City, Fla. You can find them in Michigan and Maine, as well.

Food boats, I assumed, must be about to explode like food trucks. After all, Americans clearly love the convenience and novelty of buying food from mobile machines.

But as I learned after investigating the world of food boats, they aren’t like food trucks at all, and they’re not likely to catch on like wildfire.

Food boats aren’t copying each other.

Most of the food boats out there seem to be the only one in their community. And while food truck numbers are growing nationally, food boats are a movement so quiet that nearly every food boat owner I spoke with had never heard of any of the others.

“We went into it blind,” says Ari Fingeroth, owner of Nauti Foods, Washington, D.C.’s first food boat that launched this summer. “Since we’ve started, a lot of people have told us about other food boats.”

One of the reasons food trucks have multiplied on city streets is that they’ve figured out how to specialize and exploit culinary niches: from Korean tacos to Maryland crab sandwiches to gourmet popcorn.

Food boats are more limited by the vessels. A pontoon might be able to fit a grill on board, but very few boats have the space for a full kitchen. Many food boats are just floating snack bars, offering cold beverages and pre-packaged goods.

Titcomb says that his local health department regulations are stricter for made-to-order food – a boat would need running water, bathrooms and frequent storage space inspections, among other things.

“The ice cream is pre-packaged, so we’re not handling any of the products directly,” said Titcomb. “It’s easier to obtain licenses because it’s more sanitary.”

Health codes and vendor laws vary greatly by location. The Cotuit Bay Ice Cream Boat just needed health and hawker’s licenses, but not every boat has it so easy.

Nauti Foods, which offers fresh-prepared spiral-cut hot dogs called Nauti-Dogs, was treated like a food truck, but with extra precautions, says Fingeroth. They dealt with the local health department; the D.C. River Authority; the police and marine patrol, who had concerns about the river and the safety of people who approach the boat.

“There were a lot of hoops to jump through,” says Fingeroth.

Food boats aren’t that great of a business.

Hawking snacks to people near water with little more than a few crumpled up dollar bills in their swim-trunks is hardly a recipe for big profit. For Fingeroth and his partner ,Tammar Berger, Nauti Foods is just a fun weekend project, started “on a lark.” (They have full-time jobs.)

For Titcomb, running the Ice Cream Boat is a summer gig that’s been passed down through his family for years. He says it’s not particularly lucrative, but it’s more fun than washing dishes at the local seafood joint. “Every day, someone tells us to raise prices.”

Sure, food trucks fight over parking – but food boats encroach on more than just traffic lanes. Because their customers are primarily there to enjoy the outdoors, food boats are particularly careful to avoid overcrowding the environment. The culture of boating could easily be destroyed by too many boats, says Titcomb. Fingeroth, who has been boating on the Potomac since 2000, agrees.

“I love being out on the water,” he said. “We want to add to that experience, not ruin it.”

Fingeroth added that some of that responsibility lies with government organizations like Marine Patrol, which will be crucial in controlling any influx of food boats in the future.

OK. So food boats are not that trendy. But if it’s not a trend, then what is it?

It’s probably a small manifestation of the “going mobile” trend, says Marian Berelowitz, editorial director at JWTIntelligence, a trends research and analysis group. Like food trucks, they speak to “the idea of people being more innovative with established business models, and being more creative with how to deliver a product to consumers.”

While it’s another way to meet consumers’ need for instant gratification, Berelowitz doesn’t see huge trend potential. “It’s limited in the extent to which it could evolve,” she says.

For now, the boats satisfy a quirky niche within their community, at least until they get their sea legs.