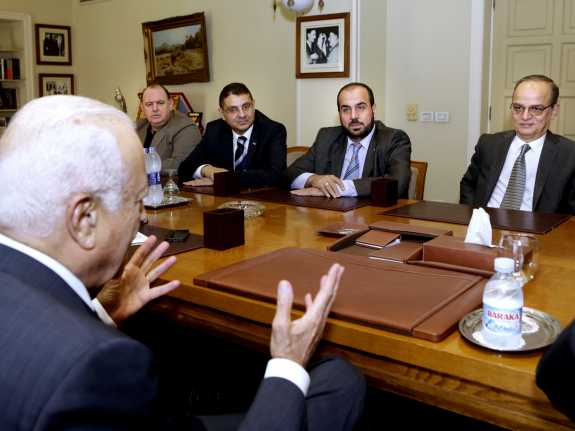 Arab League chief Nabil Elaraby is calling on the organization’s members toward a “comprehensive confrontation” of Islamic State extremists in Iraq and Syria in apparent support of U.S. plans to build a coalition to stop the militants.

Elaraby said that a “clear and firm decision for a comprehensive confrontation” was needed to confront the “cancerous and terrorist” groups in the region.

The 22-member Arab League “could provide crucial support across the Middle East for [President] Obama’s effort to assemble an international coalition against the Islamic State,” The Associated Press writes.

Elaraby’s comments come shortly after the U.S. stepped up airstrikes near the Haditha Dam in Iraq’s western Anbar province.

“‘They (the air strikes) were very accurate. There was no collateral damage … If Islamic State had gained control of the dam, many areas of Iraq would have been seriously threatened, even (the capital) Baghdad,’ Sheik Ahmed Abu Risha told Reuters.”

President Obama told NBC’s Meet the Press that he will address the nation on Wednesday to outline a new approach to fighting the insurgency, but that it would not involve U.S. ground forces.

Obama is expected to meet with congressional leaders on Tuesday about the plan.

“I just want the American people to understand the nature of the threat and how we’re going to deal with it and to have confidence that we’ll be able to deal with it,” Obama told NBC.