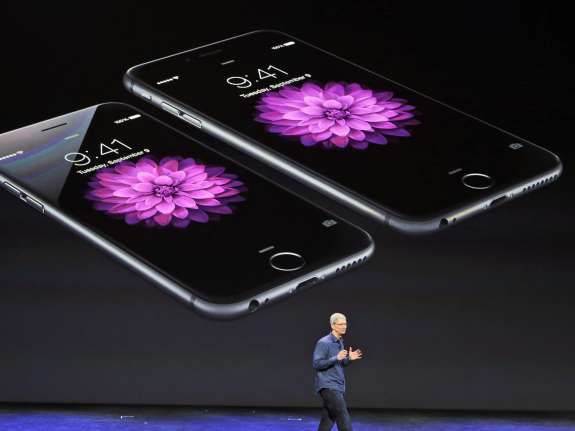 Sales of Apple’s larger iPhone 6 and 6 Plus hit one out of the ballpark last quarter, reports NPR’s Laura Sydell.

“Apple sold over 74 million iPhones in three months and it made $18 million in profits — that’s a record for the company. Apple CEO Tim Cook said that they sold 30,000 iPhones every hour.”

“The sales may reflect pent up consumer demand — many people were waiting for Apple to release a phone with a bigger screen, which its main competitor, Samsung, already had.”

“Apple also got a boost from China, where sales were up 70 percent. Last year Apple made a deal with China Mobile, the country’s largest mobile provider.”

The company’s CFO, Luca Maestri told Reuters that growth in China and other developing markets was robust and expected to continue.

“Maestri said he does not expect Apple to struggle because of China’s slipping economic growth. ‘We haven’t seen a slowdown,’ he added. Maestri also said the company doubled iPhone sales in Singapore and Brazil. Apple will reach 40 company stores in greater China by mid-2016, Maestri told analysts on a conference call.”

The company’s quarterly revenues set a record and were more than 10 percent higher than analysts’ expectations, CNBC notes.