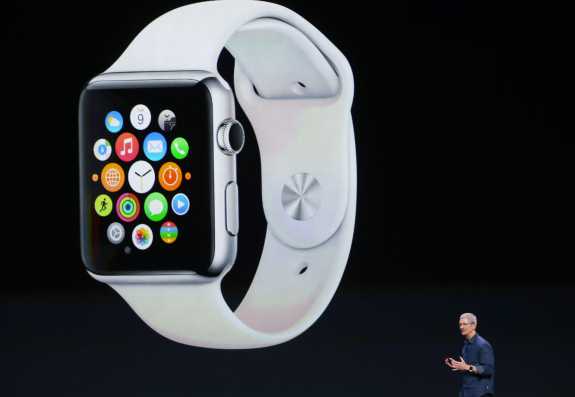 After months of rumors and dozens of fan-created images of what an Apple watch might look like, the tech giant will show us what it’s been working on today. Apple CEO Tim Cook unveiled a new smartwatch at a splashy event in Cupertino, Calif., called the Apple Watch

We’ll be updating this post with news from Apple today, including tweets from NPR’s Laura Sydell, who’s at the event at the Flint Center.

The new smartwatch “starts at only $349, and it will be available early next year,” Cook says. Apple Watch will be compatible with iPhone 5 models in addition to the new iPhone 6, Cook says.

The event is now wrapping up, with Cook summarizing As a final note, he adds that Apple Pay, the touchless payment system introduced earlier, will work with the Apple Watch. Then he introduces the band U2.

The new smartwatch comes in two sizes, both of them with rounded edges. There is also a range of colors for both straps and the watch’s body, to let people customize to their own style, Apple says. One version has a case that’s 18-karat gold. The sports edition is made of aluminum.

“We have been working on Apple Watch for a long time,” CEO Tim Cook says, noting that it incorporates many different functions. He touts the device’s ability to help its owners be active and track workouts. The user interface is based on finger-swipes and a side knob that evokes the old winding knob.

Apple says its iPhone is “required” to use the new watch. It’s unclear precisely what that means, for now. It has built Siri, the voice and audio interface, into the watch. And the watch allows its users to send each other “taps” and visual messages.

CEO Tim Cook says the next product unveiled will “redefine what people expect from its category.” He introduces the company’s new Apple Watch, which has a square-ish body and rounded edges that are similar to those on the new iPhone. The name is not, as previously rumored, the iWatch.

Saying “We’ve created an entirely new payment process” Tim Cook introduces Apple Pay, a system that allows a customer to use their iPhone 6 to pay for items at stores. The transaction uses the Touch ID (which requires a fingerprint) and near-field communication (NFC) to interact with card readers.

The new OS will include an app for sending short voice messages.

Price for the iPhone 6 Plus will start at $299. The new phones will come in gold, silver, and space gray.

After frustrating many users with a balky livefeed that stopped and started — and included real-time Chinese translation — Apple’s streaming video of Tim Cook’s keynote address has been mostly restored. The live video is available only on Apple software, we’ll note — meaning that many people are monitoring the event through live blogs. Some problems are persisting, it seems.

Apple CEO Tim Cook, promising “the biggest advancement in the history of iPhone,” introduces the new iPhone 6 and the iPhone 6 Plus. The diagonal screen sizes are 4.7 inches and 5.5 inches, respectively. They are each thinner than the iPhone 5, and feature smoothly rounded edges.

The release of what many are calling the iWatch has been anticipated for months; today, reports are emerging that the watch will include a health-monitoring app the company developed with the Mayo Clinic. Many expect Apple will also set release dates for new iterations of its iPhone and operating system, which could allow people to use their phone as a wallet, in place of credit or debit cards.

Analysts predict that CEO Tim Cook will demonstrate the iPhone 6, with a new design and larger screen that could hit the market later this month.

As NPR’s Laura Sydell says, the new model responds to a push to make phone screens larger: “The iPhone 5 screen is 4 inches on the diagonal compared with 5.7 inches on the [Samsung] Galaxy.”

Many have looked to Apple’s unveiling of a smartwatch as a potential “disruptive” product, one that can create new demands and expectations among consumers and shape a new market.

The market for smartwatches has long been seen as one that’s waiting in the wings, ready for explosive new growth. But tech experts say the trick will be to differentiate the watches from smartphones — and to give consumers a reason to buy yet another device.

Other companies have already unveiled capable and stylish smartwatches, most of them using versions of the Android operating system.

Motorola recently released its Moto 360, a $249 watch with a traditional round body and wrist strap – but with a screen that can morph from a digital or analog watch face to one that shows emails and messages.

And the Pebble, a blocky watch whose style evokes 8-bit graphics, made headlines for being what Wired called “the most successful Kickstarter project ever,” raising $10 million back in 2012. The company is now selling its watches online for $150-$250.

Steve also noted that tech experts such as venture capitalist Brad Feld are hoping smartwatches usher in a new era of the “quantified self,” with the watch’s proximity to its owner allowing people to track a variety of health metrics about themselves:

“What really excites technologists like Feld about watches is how intimate these devices could be. A watch touches your skin, so it can take your pulse, measure your temperature and record the quality of your sleep. Feld says it could become almost like another organ.”

In addition to Samsung, Steve also mentioned the Fitbit, a flexible wristband that collects “personal metrics” about its wearer’s movements and health. The device has proven to be very popular – but it lacks the range of consumer-friendly features that a smartwatch can promise, and it relies on connections to a computer or smartphone.

The Fitbit brings us to the wider realm of smart non-phones that many simply call wearables. The Google Glass can fit in this category, as well.

The pursuit of a smartwatch that’s both attractive and useful — and a hit with consumers — is one that’s been running for years. Tech giant Intel made its attempt back in the 1970s, for instance, with the doomed Microma watch.