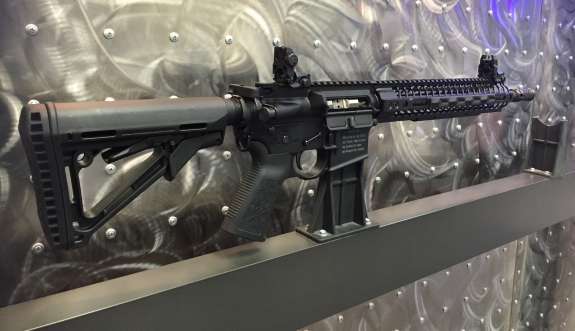 A symbol from the Christian Crusades and words from Psalms 144 are etched into the gun. Photo: Renata Sago.

“Blessed be the Lord, my rock, who trains my hands for war and my fingers for battle,” words from Psalms 144, are etched on the side of the assault rifle. The back has a cross on a shield, a symbol from the Christian Crusades.

Iraq veteran and brand coordinator Ben Thomas says he wanted to come up with a gun designed “not to be used by Muslim terrorists” after hearing a news report that ISIS militants were being trained with guns made in the United States. “The Crusader” is a political statement, he says, “that too many American-made weapons end up in the hands of Muslim terrorists.”

But designer Thomas calls the rifle a reflection of reality, and says his statement is not directed toward all Muslims.

“Whenever something’s uncomfortable, we label it bigoted, insensitive, and we take it off the discussion table. We just won’t talk about it. When I say ‘Muslim terrorist,’ yes. I have seen Muslim terrorists with my own eyes. I did ten tours in Iraq and Afghanistan. It’s not a figment of Fox New’s imagination, which I don’t watch, by the way.”