Anxious Democrats Don’t Trust Biden’s Lead. His Campaign Is Fine With That 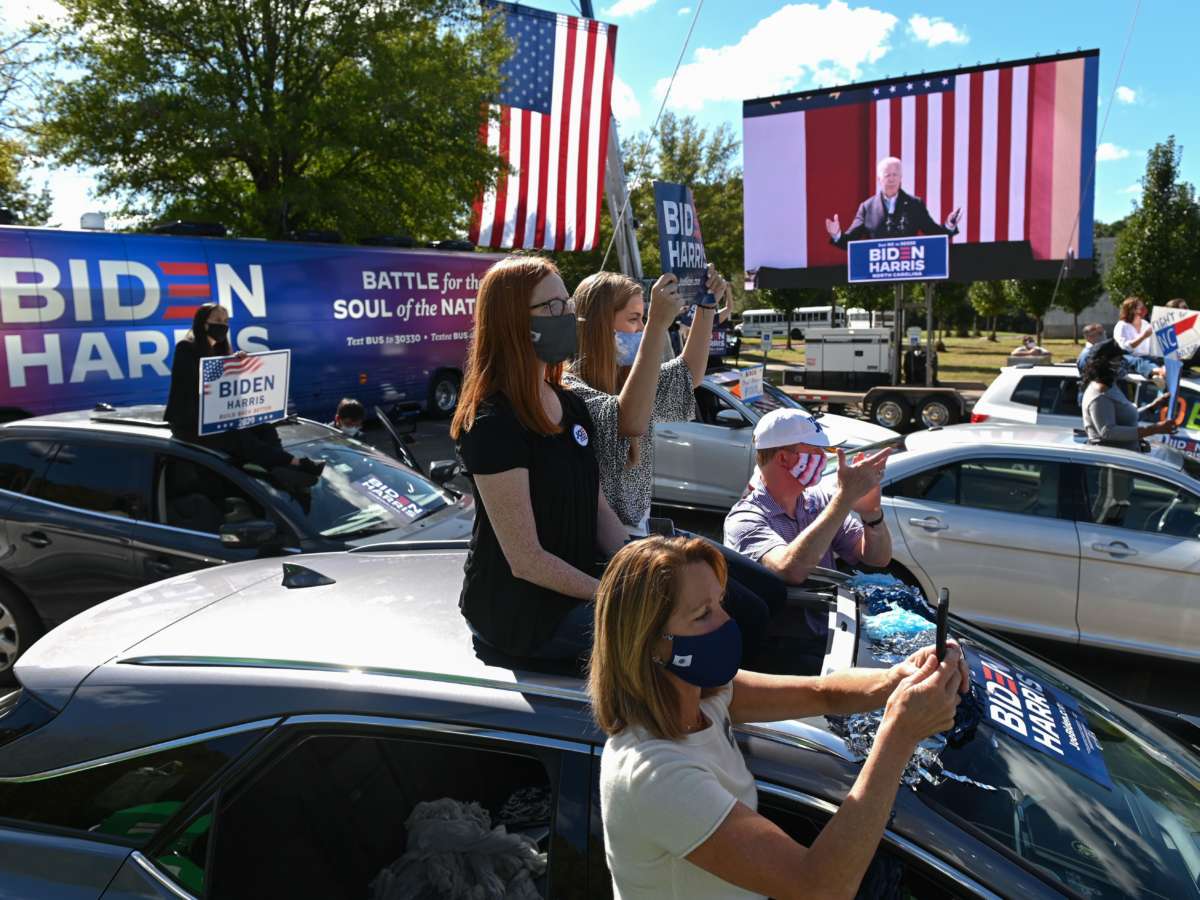 Supporters of Democratic presidential nominee Joe Biden sit atop their vehicles as they listen to him speak Sunday at Riverside High School in Durham, N.C.
Image credit: Roberto Schmidt

Democrats all across the country are anxious.

Same goes for the steady — if much more narrow — survey leads Biden has staked out in key states such as Michigan, Wisconsin, Pennsylvania and Arizona.

“Once bit, twice shy right now,” Clay Herget confessed as he sat in his car ahead of a drive-in Biden rally Sunday in Durham, N.C.

“Hopeful — but still skeptical a bit,” his wife, Misty, agreed.

Democratic leaders from the Biden campaign to the local level have no problem with this sort of anxiety. In fact, they’re doing everything they can to encourage it.

“I think we need to be careful not to get complacent, and not to get too excited about all the turnout and all the enthusiasm,” said Lydia Lavelle, mayor of Carrboro, N.C., as she sat in the back of a red convertible at the Biden rally. “Because that may have gotten us in trouble in the past. So we need to stay the course and get everyone we know to vote, right up until Election Day.”

In North Carolina especially, Democrats felt good about the early voting totals they had produced in the weeks leading up to Election Day. Then, of course, Republicans turned out in droves on Election Day, delivering North Carolina, and also the Electoral College, to Trump.

So no one wants to be complacent again.

“Don’t let the smooth taste fool you,” Winston-Salem City Council member D.D. Adams warned as she sat on top of a white SUV holding a Biden sign. “Don’t drink the Kool-Aid and don’t buy into these polls.”

Biden’s campaign even circulated a memo to supporters this weekend written by campaign manager Jen O’Malley Dillon, warning them “that this race is far closer than some of the punditry we’re seeing on Twitter and on TV would suggest.”

But it’s more than punditry. Nearly every conceivable metric — from polls to election forecasts, to financial advantages, to some down-ballot Republicans distancing themselves from the president, to signs of surging Democratic enthusiasm in early voting so far — shows that Biden is in an enviable position in key states right now.

“It is a rare place I do a poll that Trump is close to what he got there in 2016,” said Christopher Nicholas, a longtime Pennsylvania Republican operative working on local races across the key state.

That’s a problem for Trump because he had several factors going for him four years ago that don’t exist today, notably a significant share of third-party voters who peeled away from Clinton. Trump is also now an incumbent in the midst of a pandemic and recession, so he most likely won’t win the overwhelming share of late-deciding votes, as he did in 2016.

It all paints a bleak picture for many Republicans, especially as Trump chooses to pick fights with everyone from the popular coronavirus task force member Dr. Anthony Fauci to CBS News’ 60 Minutes, a top-rated program for the older voters who have turned away from Trump in recent months.

Still, don’t expect Democrats to feel confident at any point over the next two weeks.

At the drive-in rally in Durham, Misty Herget pondered whether anything could happen before the polls close on Nov. 3 to make her feel at ease.

“Probably not,” she said.