Anti-Racism Protests: Outcry After Shooting In Atlanta; Clashes In Paris And London 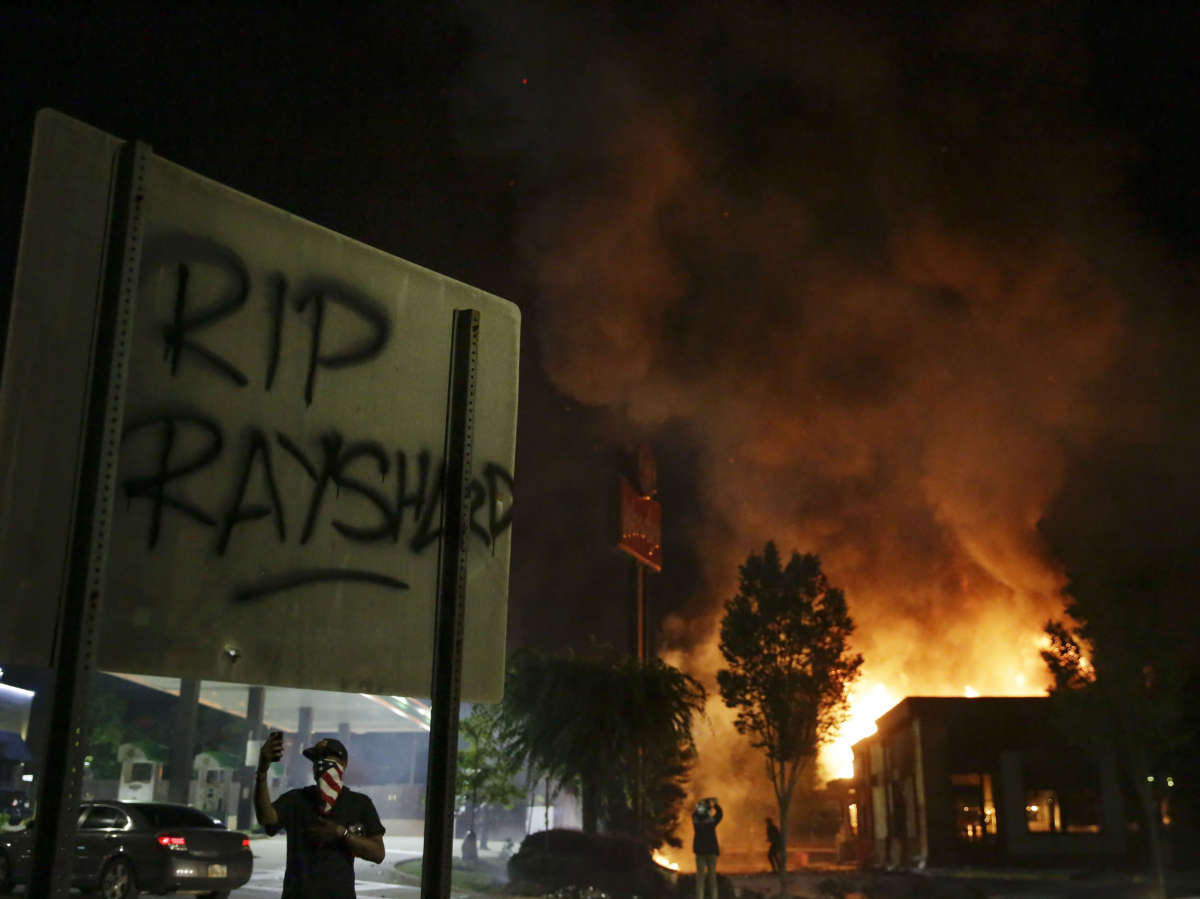 "RIP Rayshard" is spray-painted on a sign as flames engulf a Wendy's restaurant during protests in Atlanta on Saturday over the death of Rayshard Brooks.
Image credit: Brynn Anderson

For the third weekend in a row, protesters took to the streets in the United States — and in at least two foreign capitals — to demand racial justice in the wake of George Floyd’s killing by police.

In Atlanta, demonstrators were galvanized by the fatal shooting of a black man by police in the parking lot of a local fast food restaurant on Friday. Fallout from the shooting was swift and included the resignation of the city’s police chief and a fire at the Wendy’s where the deadly encounter took place.

As protests broke out, the city moved to fire the officer who shot 27-year-old Rayshard Brooks who was suspected of DUI, with Mayor Keisha Lance Bottoms saying she did not believe it was “a justified use of deadly force.” A second officer was placed on administrative leave.

Video of the incident released by both witnesses and city officials shows Brooks cooperating with officers during a sobriety test. When the two officers move to arrest him, video shows a scuffle among the three men. During the scuffle, Brooks gains hold of one of the officers’ stun guns and runs away. The officers chase him, and when Brooks turns around and appears to point the stun gun at Officer Garrett Rolfe, the officer shoots him.

A man holds up a sign during a protest Saturday near the Atlanta Wendy’s where Rayshard Brooks was killed.
Brynn Anderson/AP

Action by city officials, including the resignation of chief Erika Shields and the termination of officer Rolfe, did little to quell the public outcry.

Crowds gathered to protest the killing, and by late Saturday, the Wendy’s where the deadly altercation took place was engulfed in flames.

“What other way is there to get the point across to them besides this? We’ve tried everything else and it doesn’t work, so this is what the result is,” said one protester, Damon Belton, in an interview with NPR member station WABE.

Riot police who arrived at the scene were met with bottles thrown by protesters. Police would later fire tear gas on the crowd.

Rayshard Brooks’ death was ruled a homicide on Sunday, according to a press release from the Fulton County Medical Examiner’s Office.

Brooks was shot twice in the back — wounds “that created organ injuries and blood loss,” the autopsy report revealed.

Anger and frustration over systemic racism and police violence spread far beyond Atlanta over the weekend.

In Paris, the killing of George Floyd by Minneapolis police last month has brought a renewed surge of calls to bring charges against three officers involved in the death of Adama Traoré, a black man who died in police custody in 2016 in a suburb just outside the French capital.

Protesters were met by riot police on Saturday as they filled the streets chanting: “Justice for Adama.” The protest began at the Place de la République, according to reports by The Guardian and the BBC, where several demonstrators climbed the statue of Marianne, a monument personifying the French Republic.

People gather at the Place de la Republique in Paris on Saturday for a march against police brutality and racism.
Thibault Camus/AP

A man kicks a tear gas canister during a march against police brutality and racism in Paris.
Thibault Camus/AP

At one point during the protest, Traoré’s sister, Assa Traoré, addressed the crowd.

“The death of George Floyd has a strong echo in the death in France of my little brother,” she said. “What’s happening in the United States is happening in France. Our brothers are dying.”

Protesters tried to move on to the city’s Opera House but were blocked by riot police. Several skirmishes broke out, and police moved on the protesters, firing tear gas.

Protests were also held in several other French cities.

Police confront protesters in Whitehall near Parliament Square in London. The weekend’s unrest include “protect our monuments” protesters.
Jonathan Brady/AP

In London, fights broke out between Black Lives Matter protesters and far-right counterdemonstrators, leading to more than 100 arrests on Saturday, according to the city’s police department. The confrontations occurred despite calls from organizers and the city’s mayor for protesters to stay home.

According to The Guardian, a cry to “protect our monuments” drew largely white protesters to London. The protest came in an apparent response to recent vandalism of monuments of figures tied to racist practices in British history. These include the recent toppling of a statue of the 17th century slave-trader Edward Colston in the city of Bristol, and an incident where “racist” was spray-painted on a London statue of Winston Churchill.

Anticipating possible violence and vandalism this weekend, London authorities covered up the Churchill statue as well as the Cenotaph war memorial and a statue of Nelson Mandela.

On Saturday, hundreds of largely white far-right protesters, football hooligans and other supporters thronged Parliament Square, site of the Churchill statue. Police penned in the demonstrators, who began throwing bottles and punching officers.

In the city’s Trafalgar Square, anti-racist protesters clashed with the far-right demonstrators. Many groups organizing anti-racist protests had discouraged demonstrations this weekend. Events organized by both Black Lives Matter and a self-avowed anti-facist group were canceled to avoid overlapping with the “protect our monuments” rally. The city’s mayor, Sadiq Khan, had also urged protesters to stay home this weekend.

In the end, at least six people were hospitalized.

Prime Minister Boris Johnson condemned the violence, tweeting “racist thuggery has no place on our streets.”