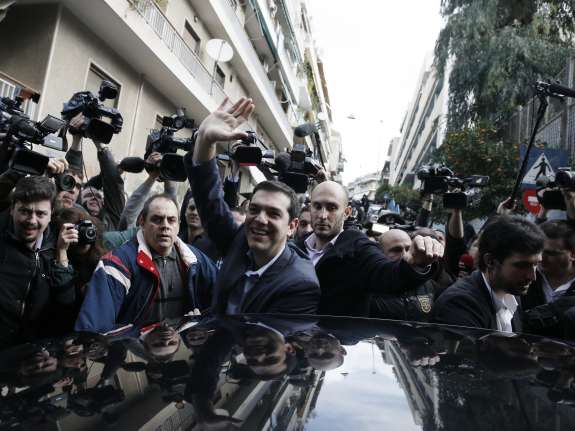 Greece’s radical left Syriza party has become the first anti-austerity party to win elections in Europe, throwing into doubt whether the troubled country stays the course on an international austerity plan.

The party fell just short of an absolute majority, NPR’s Joanna Kakissis reports for our newscast unit, and will have to work with another party to govern.

“This is a historic win because it’s a direct challenge to Eurozone policies,” Joanna says. “But everyone is wondering how Greece, which is deeply in debt, will stay solvent without those loans.

Official results from 80 percent of the polling stations put Syriza, led by 40-year-old Alexis Tsipras, at 36 percent, comfortably ahead of the 28 percent for New Democracy, the center-right party led by Prime Minister Antonis Samaras.

As the results came in, Tsipras told cheering supporters that five years of austerity — which he called “humiliation and suffering” — were over, The Associated Press reports.

The centrist Potami (River) party trails, along with the far-right, Nazi-inspired Golden Dawn. When all the votes are counted, Syriza may have won the 151 seats needed to have a majority in the 300-member parliament. However, if the party can’t reach that threshold, it would have to woo allies to form a government.

Meanwhile, the euro slipped further against the U.S. dollar and other major currencies in early trading in Asia in response to the news that Syriza was the likely winner. On Monday in Auckland, New Zealand, the EU’s common currency, which is used by Greece and 18 other nations in Europe, weakened by 0.3 percent to nearly its lowest level in 11 years.

In 2010, as Greece was on the verge of a default on its sovereign debt, Athens agreed to unpopular austerity measures in exchange for billions of euros from its fellow European Union countries and the International Monetary Fund. The measures have cut salaries and pensions. Even so, public debt has climbed from 146 percent of GDP in 2010 to more than 175 percent of GDP last year — the second-highest in the world, Reuters notes.

As Joanna Kakissis, reporting for NPR from Athens, says: “More than a quarter of Greeks are unemployed. Four years of austerity … have crushed the economy. Greeks are now poised to elect Syriza, a leftist party that calls austerity ‘fiscal waterboarding.’ ”

As The Associated Press reports:

“The Syriza party led by Alexis Tsipras has remained firmly ahead of conservative Prime Minister Antonis Samaras’ New Democracy party in opinion polls throughout the election campaign, which was called two years ahead of schedule.

“But those polls also have shown that a significant portion of voters remained undecided until the last minute, and suggest that Syriza might struggle to win enough parliamentary seats to form a government on its own.”

“Final opinion polls on Friday showed Syriza, which has pledged to overturn austerity and renegotiate Greece’s debt mountain, with a lead of between four and seven percentage points over its main rival New Democracy, with one poll putting the radical leftist party 10 points clear.

“But while it seems clear Alexis Tsipras’s barnstorming alliance of Maoists, Marxists, Trotskyists, Socialists, Eurocommunists and Greens will comfortably see off the conservatives of the prime minister, Antonio Samaras, they are far from certain to win the 151 seats they need to govern alone.”