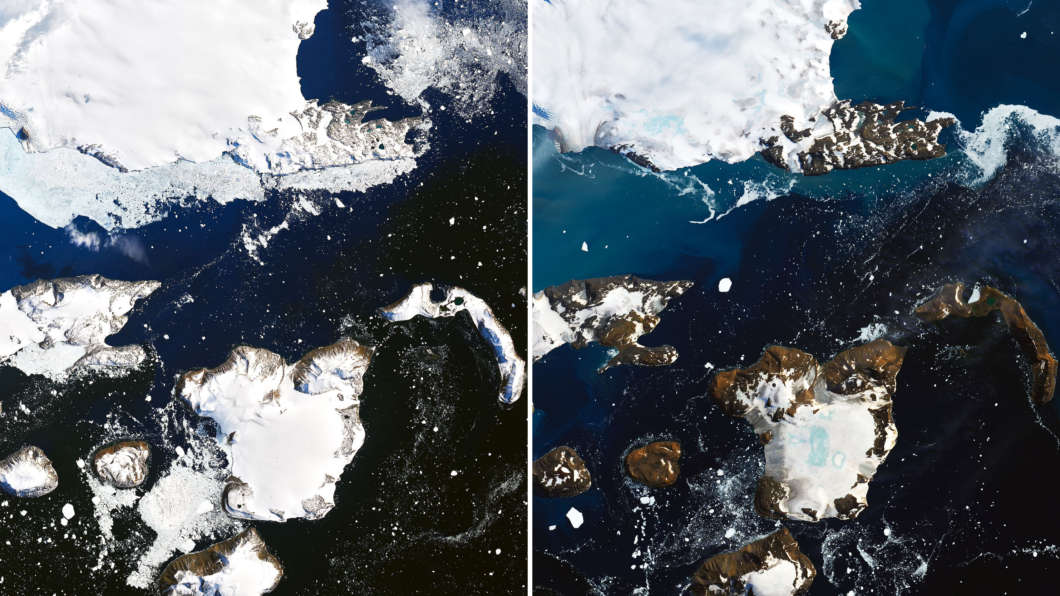 Satellite images show the effects of a prolonged warm spell on Eagle Island, in the far north of the Antarctic Peninsula, NASA says. An inch of snowpack melted in just one day, the agency says. The blue areas in snow on the right are ponds of melted water.

Where there was a white ice cap, there are now brown blotches of land; melted snow and ice have created ponds of water. Those are the effects of the recent record high temperatures in Antarctica, according to NASA, which on Friday released stunning before-and-after satellite images of northern Antarctica.

The photos center on Eagle Island, part of the northern tip of the Antarctic Peninsula that stretches toward South America. Satellites took the images just nine days apart, on Feb. 4 and Feb. 13. But dramatic changes took place in that timespan. Two days after the first photo was taken, the area hit 18.3 degrees Celsius (64.9 degrees Fahrenheit) — matching that day’s temperature in Los Angeles, NASA notes.

“The warm spell caused widespread melting on nearby glaciers,” the space agency says. It adds, “Such persistent warmth was not typical in Antarctica until the 21st century, but it has become more common in recent years.”

On Eagle Island, the biggest loss of ice and snow came on Feb. 6, when an inch of snowpack melted, according to NASA’s climate models. By Feb. 11, the island had lost four inches of snow.

“I haven’t seen melt ponds develop this quickly in Antarctica,” Mauri Pelto, a glaciologist at Nichols College, said in NASA’s news release about the phenomenon.

The nearly 65-degree temperature was reported by Argentina’s research station at Esperanza Base. Experts at the World Meteorological Organization are still verifying the record. The agency calls the Antarctic Peninsula near South America one of the fastest-warming regions on Earth, with average temperatures rising almost 3 degrees Celsius (37.4 degrees Fahrenheit) over the past half century.

“These warm events are occurring more frequently” in that part of the peninsula, says Alexandra Isern, head of Antarctic sciences at the National Science Foundation.

Discussing the NASA images Friday, Isern also cautions, “We have to understand that that those images were taken about as far north in Antarctica as you can get. So if any place is going to have those melt ponds, that’s certainly going to be one place.”

Still, she says, it’s surprising to see such a rapid and dramatic shrinkage of snow and ice.

“You see those sort of things in Greenland and in the Arctic more often than you see them in the Antarctic,” Isern says.

Because the recent warmup lasted for more than a week, she says, researchers are left with a troubling question: “Are we starting to see these warm events also lasting longer than they did before?”

The answer to that, Isern says, could have far-ranging impacts for the area, including the possibility that new invasive species could gain a foothold in Antarctica if its climate becomes more forgiving.

Isern agrees with NASA’s assessment that a number of weather conditions combined to create the unusually warm temperatures in the Antarctic’s northern point.

“Typically, the peninsula is shielded from warm air masses by the Southern Hemisphere westerlies, a band of strong winds that circle the continent,” NASA says. “However, the westerlies were in a weakened state, which allowed the extra-tropical warm air to cross the Southern Ocean and reach the ice sheet. Sea surface temperatures in the area were also higher than average by about 2-3°C.”

The task now, Isern says, is to determine whether those factors created an anomaly, or if they hint at a new pattern.

“This is a weather event,” she says of the recent warm spell. She believes scientists will now try to figure out whether the warm weather event in Antarctica’s northern peninsula is on its way to becoming a climate event.