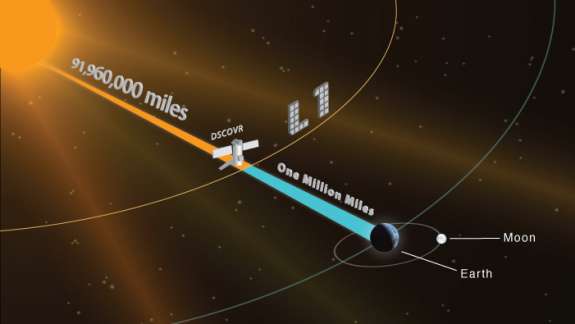 Deep Space Climate Observatory Satellite will be placed at Lagrange 1, a point of gravitational stability between the Earth and the sun. Photo: NOAA

SpaceX will try to launch a Falcon 9 rocket Wednesday carrying an observatory satellite. The Deep Space Climate Observatory – or DSCOVR – will be positioned 1 million miles from the earth.

It will track damaging solar storms hours before they impact satellites and astronauts – almost like a solar tsunami buoy.

Being in that position will also allow the observatory to take full-view, live pictures of the earth – something scientists haven’t been able to do since Apollo 17 astronauts walked on the moon.

Senator Bill Nelson says that ability is invaluable to the scientific community. “[DSCOVR] will give us a new perspective of the overview effect of what this home is that we call planet earth, and what it looks like on a daily basis,” says Nelson

The DSCOVR project was started during the Clinton administration spear headed by then vice-president Al Gore.