Anguish, Raw Emotions At Ceremony For Fallen Soldiers As Trump Looks On 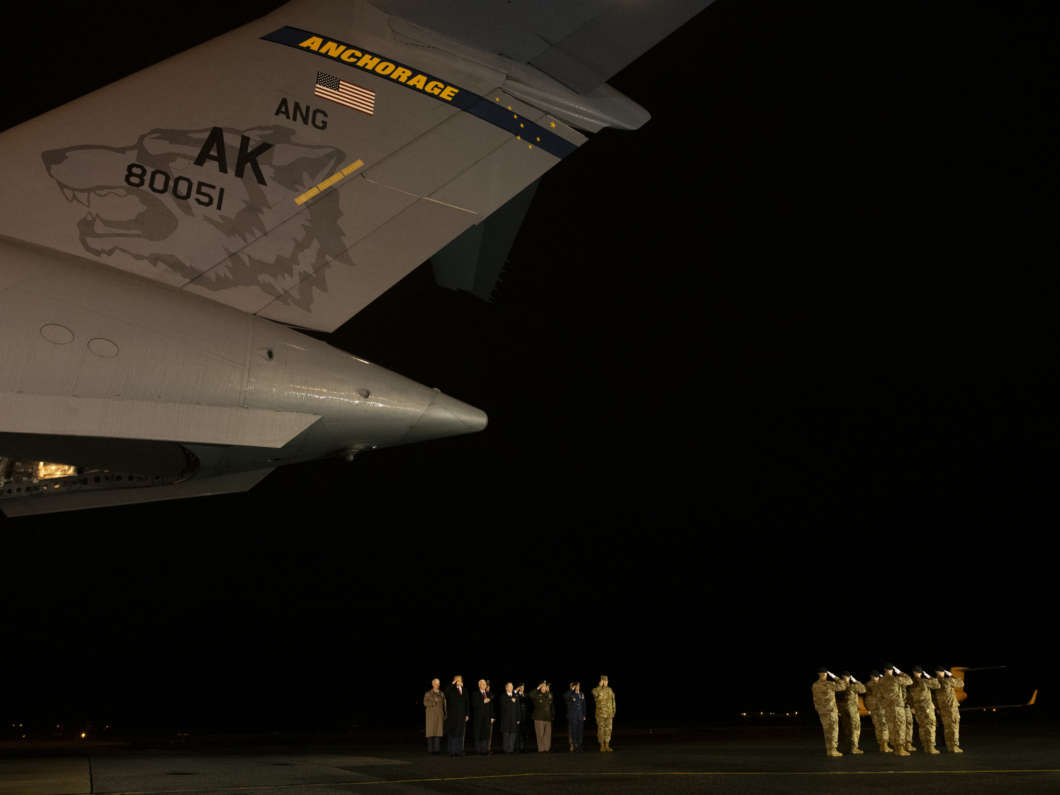 The silence was broken suddenly and unexpectedly. A woman burst out from a tent at Dover Air Force Base where families waited for a ceremony marking the return of their loved ones’ remains to U.S. soil.

Screaming and running toward a massive gray C-17 transport plane, the woman made it part way up the ramp toward the cargo hold, her footsteps reverberating on the metal ramp as relatives and a service member tried to catch her and hold her back.

It was impossible to make out what she was saying as she wailed and struggled. Was she saying the name of one of the fallen soldiers? One word was unmistakable: “No.” Photographers averted their cameras as suffering that is often out of sight spilled out onto the tarmac.

Javier Jaguar Gutierrez and Antonio Rey Rodriguez were assigned to 3rd Battalion, 7th Special Forces Group and were killed in combat in Afghanistan’s Nangarhar Province this weekend. Both 28 years old, they were posthumously promoted to Sergeant First Class.

President Trump cut short a raucous New Hampshire campaign rally on Monday to make a last-minute flight to Dover, where America’s fallen service members are brought to be prepared for transport to their final destination. There, he met up with Vice President Mike Pence, who had also spoken at the rally. It was the first time since transfers were opened to the press more than a decade ago that both a president and vice president attended together.

“These were fallen heroes and we were close by and the president wrapped his rally early so he could come and see these families,” Trump’s national security adviser Robert O’Brien told the pool of reporters traveling on Air Force One. “It’s tough for the president, but he thinks it’s important.”

The transfers are a solemn ritual executed with precision by military professionals with all too much experience receiving the remains of the fallen. In the majority of cases, family members make the flight out to Dover to be there on the tarmac as the flag-draped transfer cases are taken off the transport plane that returned them to American soil. For these families, this is early part of a long and painful process of adjusting to a new reality without their loved ones.

Trump and Pence met privately with the families indoors before moving outside. Inside the C-17 rested two flag-draped transfer cases (the term used by the military instead of casket or coffin). It was late, after 10 p.m. and a light mist fell onto the wet tarmac.

Trump and Pence stood behind a van waiting for the transfer to formally begin, with Trump swaying from side to side. Then a van pulled up with the family members. They weren’t visible to the press, a view purposely obstructed out of respect for the families. The families have to grant permission for the media to be present, to witness the transfer, and in this case both families consented.

It is a long-standing rule that audio recording is also not allowed and photos and videos of grieving families are prohibited. The families have a special seating area under a tent to protect them from the rain and watch as the remains of their loved ones are transferred to a waiting van.

When the grieving woman returned to the family area, the solemn movement began as planned. The mist turned to a steady light rain as soldiers wearing white gloves, known as the carry team, went up into the cargo hold. Dignitaries followed, high-ranking military officials, and Trump and Pence.

A chaplain could be heard delivering a short prayer and then the dignitaries walked back down to the tarmac. President Trump briefly hesitated on the metal ramp before bounding down quickly and joining the others.

The dignitaries stood on the tarmac as the first flag-draped transfer case was carried out and put into a waiting van. Everyone in uniform held a salute as the case slowly passed by. Trump, too, saluted, while Pence put his hand on his heart. Then the carry team brought out the second case and there was another salute.

As Staff Sgt. Tiliyah Tillman, the door attendant, slowly closed the doors at the rear of the van, the wailing began again. The emotion, the screams of “no!” hung over the tarmac as the van pulled away. It was a raw and painful reminder of the incredible sacrifices made by members of the military and their families, sacrifices that often go unseen by the vast majority of the public.

President Trump made no public statement and returned to Air Force One. But he often references these visits when explaining why he wants to pull U.S. forces out of Afghanistan and Iraq.