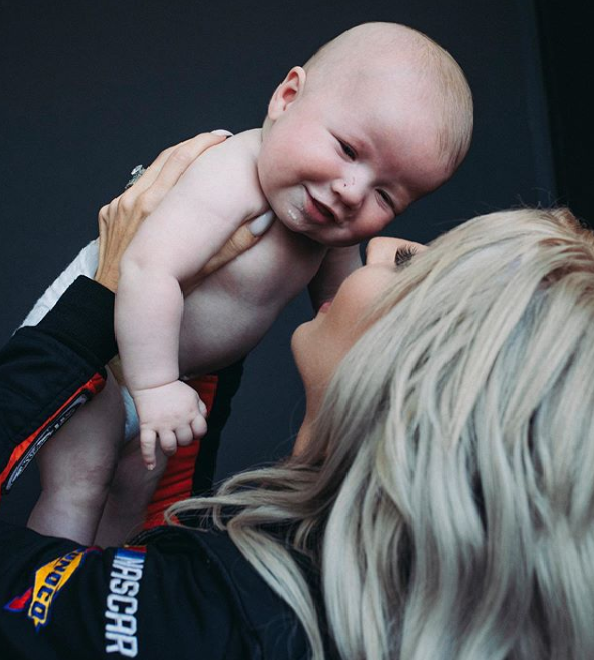 NASCAR driver Angela Ruch is one of three women competing this season. Ruch competed in the Truck Series of the Daytona 500 last weekend but a crash kept her from placing in the top ten.

This comes off a record breaking run at last year’s race for Ruch and her team. She was the first woman to lead lap times in the Truck Series ultimately finishing in eighth place overall-a career best.

The same month she became the second fastest woman in the Truck Series, Ruch and her husband Mike adopted a baby boy King. A few months, later they adopted little sister Lorde.

90.7 WMFE spoke with Ruch about the lessons she wants to teach her young fans about following your dreams and always getting back behind the wheel.

Here are some excerpts from our conversation with Ruch.

On being one of three women to compete in the Daytona 500:

“I will say being in this sport and in this elite series that I am, it’s definitely been a struggle. Just trying to earn the respect of NASCAR, my male competitors. It’s definitely tough. But now that I’m here right now, I know that it’s definitely well deserved. I had that eighth place finish last year in Daytona, first female to lead laps in the Truck Series.”

On what she tells young female fans who come to watch her at the track:

“You know yesterday I met with a little girl, she was walking by my motor coach. I talked to her for about fifteen minutes. Like I told her I’m 35 years old and I’m just now achieving my dreams in life at this age. I started at a young age, probably her age. She was eleven years old. So I started racing around the same time. You just can’t ever give up that’s what I told her.”

On how it felt to break a record at last year’s Daytona 500:

“It was amazing. Having a shot at winning. We heard the motor at the end there, finished eighth. To live in those moments that I know my uncle went through when he actually won the Daytona 500. It was a dream come true. You know when you’re racing that fast and you have so much adrenaline going, you have so many thoughts going through your head at that time. You really gotta pinch yourself and realize what you’re doing. For me it was surreal.”

On what it would take for more women to compete in NASCAR and win the 500:

“It’s hard to say you know. Until a woman actually wins a race I think is when women will be more welcomed with wider arms. It’s still tough for us women. We’re still, not frowned upon, kind of looked down on in regards to ‘Can we really do it? Can we handle it?’ Well yes we can because I know we’re here and we’re doing it every weekend the three of us women. But again one of us needs to pull out a W for us to open the doors for opportunities, for sponsors willing to come in and know and realize that women can be just as good as the men.”