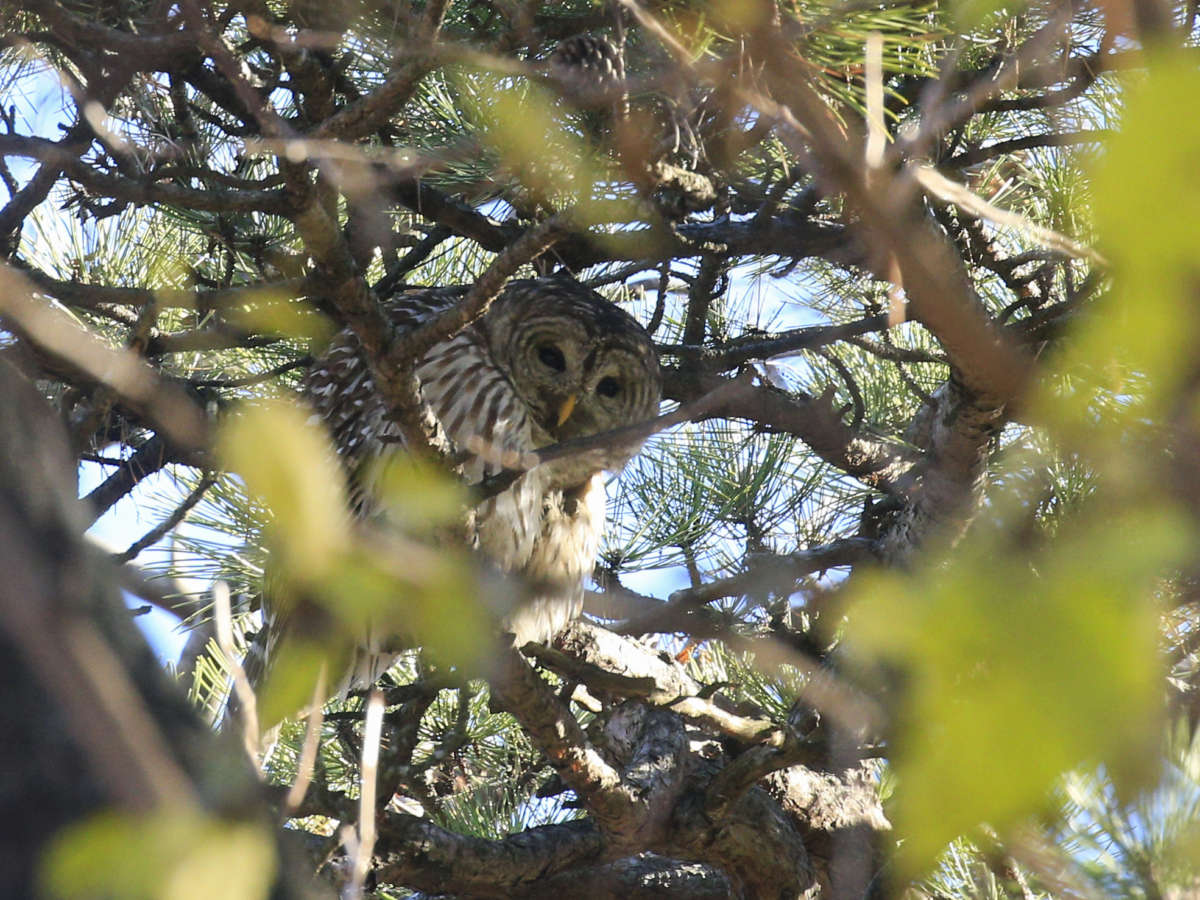 Barred owls are known to be aggressive and territorial. A barred owl similar to this one recently attacked a Washington state woman — twice.
Image credit: Kena Betancur

Kirsten Mathisen was walking alone in the woods by her Hansville, Wash., home when she was attacked.

There was no warning. Her attacker was fast and silent, but left its mark.

“It felt like getting punched in the back of the head by someone wearing rings,” Mathisen told NPR.

Luckily, she was able to get photos and video of her attacker: a white barred owl.

The attack was unprompted, Mathisen said. She was just walking, as she always does. In fact, she had seen this owl before and there was never any problem.

When she got home, her boyfriend helped disinfect her scalp — now bloodied and cut — and she told him the unbelievable story. Later on, at the urging of her friends, she went to the doctor, who recommended she get a tetanus shot to avoid any further issues from the owl’s bacteria-carrying claws.

Mathisen wasn’t going to be kept captive in her house, so she did her best to avoid the owl’s territory.

“I just was like, ‘OK, I just won’t walk that way for a few days.’ But then, exactly a week later, on the next Saturday, I was on my driveway much closer to the house. And same thing.”

Yup, the owl struck again. This time it left behind five or six deeper cuts and Mathisen far bloodier.

She thought, “What is going on?”

She turned to Reddit for answers when local wildlife authorities were slow to respond. Some people said she was cursed. Others joked she was missing her Hogwarts acceptance letter.

Even more people shared with her a popular theory about the death of Kathleen Peterson, whose husband was convicted of killing her. The documentary The Staircase covered the case. Those who don’t believe Michael Peterson killed his wife suggest that she was mortally wounded in an aggressive owl attack.

Mathisen also found several other stories about people in the Washington state area who had been attacked by other aggressive barred owls. A runner in West Seattle posted her very similar story on Reddit. She found a unique way to continue her runs without being attacked: She dons an owl mask on the back of her head. The city of SeaTac even put up a warning sign in a local park to warn visitors of its owl problem.

Barred owls are “aggressive owls and they’re highly territorial,” Jonathan C. Slaght, a wildlife biologist with Wildlife Conservation Society, said. He examined a photo that Mathisen took and confirmed the animal to be a barred owl.

They traditionally nest in the cavities of trees. Unfortunately, these owl-human confrontations are more common now because of the shrinking availability of dense forests that allow the owls to be more secluded, he said.

“The more you reduce the places where an owl can nest, the more likely it’s going to be nesting somewhere in close proximity to humans,” Slaght said. “If they’re kind of amped up and a fox walks by, a deer walks by, a human walks by, whatever, they’ll pop down and try to chase it off.”

Mathisen has altered her walking path altogether to avoid where the owl lives. She has also taken to wearing a hat or carrying an umbrella to protect against further whacks on the head, but she’s hoping she won’t have to do this forever.

“I don’t want the owl to be put down or something. It’s very beautiful. It’s just a pretty bitch,” she said.

Slaght had bad news for her: “I think she’s doomed,” he said.

The actions of the owl suggest it’s nesting or pre-breeding, he said.

The good news is that this is seasonal, so the owl may eventually move on or quit being so territorial.

“It’s not like forever. This will sort of work its way out,” he said.

In the meantime, he suggested Mathisen wear a hat, continue using the umbrella or just admit defeat and find somewhere else to walk.