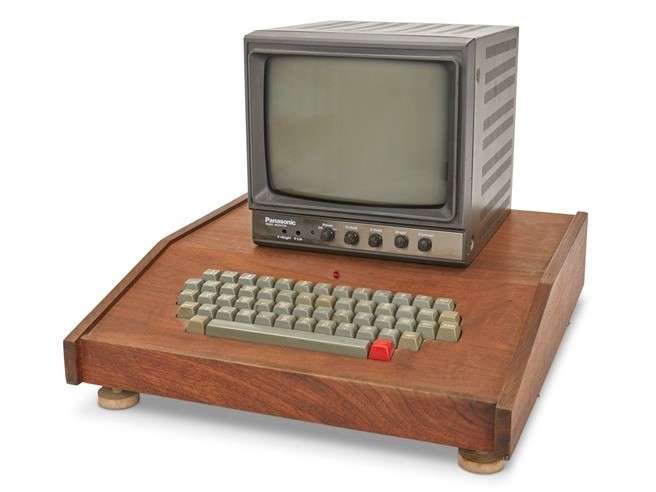 John Moran Auctioneers in Monrovia, Calif., auctioned it off on Tuesday, one of 200 Apple-1 computers that were designed, built and tested by Steve Wozniak and Steve Jobs, with help from Patty Jobs and Daniel Kottke.

“What we have with the Apple-1 is sort of like the holy grail of vintage computer collecting,” says Corey Cohen, an Apple and technology historian.

The computer auctioned is known as the “Chaffey College” Apple-1 because its original owner was a professor at Chaffey College in Rancho Cucamonga, Calif. He ended up selling the computer to a student in 1977 so that he could buy an Apple-II computer.

The student, who remains unidentified, has kept the computer until now.

Apple-1s came as motherboards, with cases, keyboards and monitors sold separately. The unit features a case put on by The Byte Shop in Mountain View, Calif., which was the first store to sell Apple products.

The case is made of koa wood, one of only six known koa wood cases in existence, according to the auction house. Koa wood, native to Hawaii, was abundant in the 1970s, but has become rarer and more expensive due to cattle grazing and logging.

Apple-1 was the start of the personal computer industry

The Apple-1 was the first Apple product to be sold. It marked the start of the personal computer industry.

It was the first personal computer that came with a warranty. “It was guaranteed to work,” Cohen says. “Prior to that, there were other computers. They were kits. They mostly didn’t work when you got them.”

They were originally sold for $666.66. “While that sounds pretty ominous, 666, it’s because Steve Wozniak likes repeating numbers,” Cohen tells Morning Edition. “Even his own phone number at the time had a repeating number.”

He said this specific machine not only represents the start of Apple, but the ingenuity of Wozniak and Jobs and their vision “where a computer isn’t something to be afraid of, a computer is something that can be part of your life and can help improve your life.”

“It took a long time, I think, for people to catch on to that idea,” he says. “But it is something that, you know, it helps people kind of feel closer to that progress.”

Tien Le is an intern on NPR’s News Desk. Barry Gordemer and Jessica Green produced the audio version of this story.