An oral history of the Nike Cortez, 50 years after its release 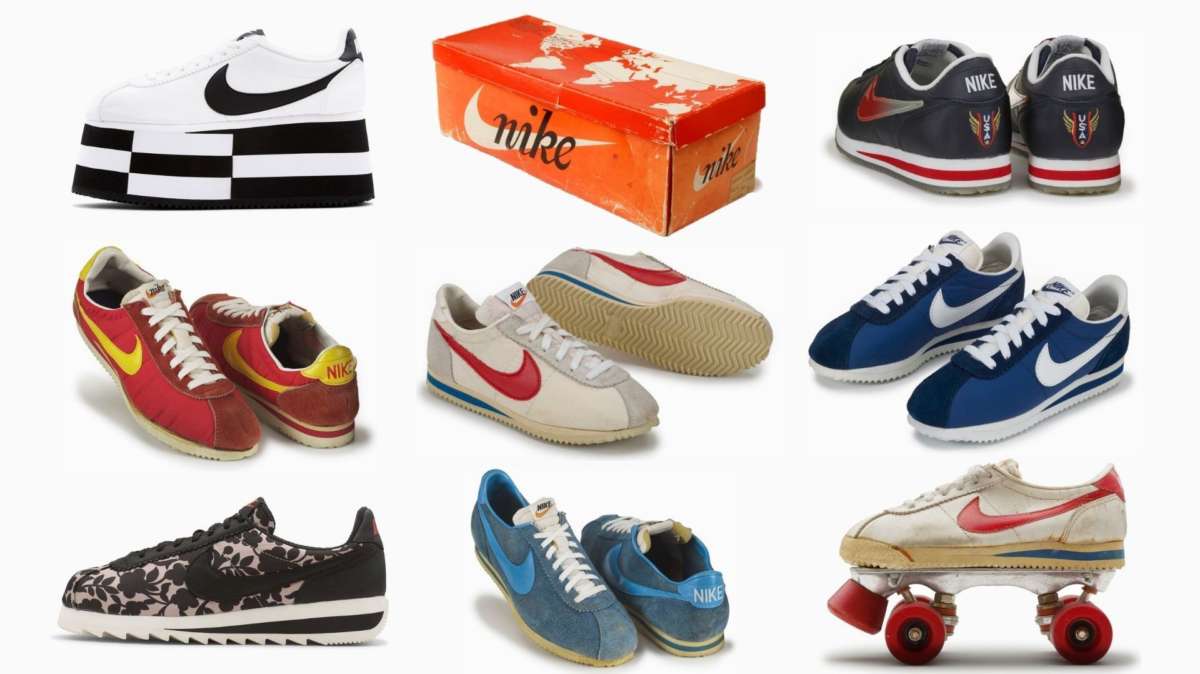 In 2022, the Nike Cortez is ubiquitous. To date, Nike has produced more than 700 versions of the shoe, collaborating with the likes of Bella Hadid, Kendrick Lamar, and the Netflix show Stranger Things. The shoe’s prominent swoosh and herringbone pattern outsole have made it popular across generations.

The sneaker made its debut in 1972. Immediately upon its release, it became a staple of the company’s early years. The Cortez has also been a staple in pop culture – it was the shoe of choice for Forrest Gump when he ran across the country and Whitney Houston when she sang the national anthem at the Super Bowl in 1991.

Before it was Nike

When Nike was founded, it was a startup that didn’t manufacture its own shoes. It wasn’t even named Nike: It was Blue Ribbon Sports, co-founded by Bill Bowerman, legendary University of Oregon track coach, and Phil Knight, a businessman who Bowerman had once coached.

The two co-founded Blue Ribbon Sports as more of a retail operation. Blue Ribbon signed a contract to distribute shoes made by Onitsuka Tiger, a Japanese shoe-manufacturer, that was looking to make inroads in the United States.

How the Cortez got its name

In his 2016 memoir Shoe Dog, Phil Knight writes that Onitsuka sent Bill Bowerman and Phil Knight a shoe prototype they were collaborating on in 1967 — the company wanted suggestions on a name. With the 1968 Olympic games held in Mexico right around the corner, Bowerman came up with “The Aztec,” a homage to the Mesoamericans who inhabited what eventually became Mexico.

There was, however, one problem: Adidas had already released a track shoe called the Azteca Gold — and they were threatening to sue if the name wasn’t changed. The name Aztec was out.

In the book, Knight documents how the shoe eventually got its name:

“Aggravated, I drove up the mountain to Bowerman’s house to talk it all over. We sat on the wide porch, looking down at the river. It sparkled that day like a silver shoelace. He took off his ball cap, put it on again, rubbed his face. “Who was that guy who kicked the sh*t out of the Aztecs?” he asked. “Cortez,” I said. He grunted. “Okay. Let’s call it the Cortez.”

The name Aztec wasn’t available. So they named it after the man who conquered the Aztecs and took their capital city of Tenochtitlan: Hernán Cortés — a clear sign to Adidas that the up-start Blue Ribbon was looking to make waves in the world of footwear.

The Nike Cortez’s name is a reference to the atrocities of colonization.

The Cortez as we know it today

Immediately upon release, the Cortez was a hit, helping the company hit its end-of-year revenue projections. It was so popular that it caused a whole host of inventory and supply problems for Blue Ribbon. Knight details this in Shoe Dog:

“It was simply too popular. We’d gotten people hooked on the thing, turned them into full-blown Cortez addicts, and now we couldn’t meet the demand, which created anger and resentment up and down the supply chain.”

It became so important to Blue Ribbon’s business that when the company started manufacturing its own shoes and rebranded as Nike, the Cortez was one of a handful of shoes at the center of a lawsuit between Blue Ribbon and Ontisuka.

Each company wanted to retain the rights to the name Cortez. Of course they did — it was one of the most popular shoes in America. Eventually, Nike won out and received the rights to the Cortez, and Onitsuka was allowed to continue manufacturing their own version of the shoe, called the Corsair.

In 1972, Nike unveiled what is recognizable today as the Nike Cortez. It included nearly all of the same design elements as the original Cortez, only the Onitsuka logo was replaced by the now-famous swoosh.

Fifty years after its release, Nike Chief Design Officer John Hoke says the shoe is an important part of the company’s culture. He says in a statement to NPR, “Nike Cortez is the quintessential expression of our design philosophy.”

Nick Engvall is founder and host of the Sneaker History podcast, a show about news and developments in the world for sneakers. For him, the Cortez became a way to look fashionable on a budget.

“The reason I started wearing it was because it was inexpensive,” says Engvall. “I wanted a swoosh on my shoe and [the Cortez] was the way that I was going to be able to have that without spending $100 on a pair of Nike Air Jordans.”

The Cortez as a cultural symbol: Los Angeles, Chicanos, and resilience

In the 1980s, the Cortez began to take on a new association: the city of Los Angeles.

At this point in Nike’s history, it already had deep roots in Southern California. Not only did the first Blue Ribbon Sports retail location open in Santa Monica, four of Nike’s ten department stores were located in the greater L.A. area by 1973.

The Cortez became a feature of the city. By Nike’s account, “over time, the silhouette became a staple of the city’s swap meets, car clubs and schoolyards.”

The shoe’s classic look, simple color schemes, and affordable price made it an easy choice for working class and low-income families.

The shoe made its deepest inroads within Southern California’s Black and Hispanic communities. The most popular ambassador of the shoe was perhaps Eazy-E, whose Cortezes were integral to his gangster rap image.

It was also in this era that the Cortez began to be adopted by gangs. The shoe’s basic design and wide availability made it easy to incorporate into any number of gang uniforms — and all of this was happening as Los Angeles was entering a period of rising crime associated with the crack epidemic.

This association with gangs has been particularly sticky for the Cortez. Even today, it’s not difficult to find examples of people online asking if and where it’s safe to wear the shoes.

Estevan Oriol is a photographer who documents life and culture in Los Angeles, and according to him, “back then, you knew exactly who was a gang member. If they had Cortezes, baggy 501s, a white t-shirt on — you knew.”

“In the 80s and 90s, a lot of people from the hood were wearing them. If you wore them to school, they’d tell you to go home and change your shoes cause they were gang related,” says Oriol.

Like white tees, bandanas, and Dickies, the Nike Cortez let the world know you weren’t to be messed with and could be gang-affiliated.

But the shoe’s appeal was not just limited to gangs. Its popularity was broad, and of all the people and groups that have embraced the Cortez, there have been none that have laid a stronger claim to the shoe than Latinos in Southern California.

In the 80s and 90s, the Cortez became an essential part of Chicano streetwear.

The shoe was a fashion statement, but it was also a symbol of resilience — proof that somebody could come from dire circumstances and demand respect.

Alexis Quintero is a designer and creative from East L.A. who’s partnered with Nike on a line of clothes inspired by the city of Los Angeles. The Chicanos she grew up around, “literally took that shoe and made it their own,” she says.

“They made it so powerful — like we know when we see anyone with that shoe not to mess with them. It’s so iconic to us and what it means to be Chicano,” says Quintero.

This connection isn’t lost on Nike.

The company has released versions of the shoe themed for Día de Los Muertos and Latino Heritage Month.

What’s in a name?

The shoe named after a conquistador has become a powerful cultural symbol for the descendants of the people he conquered.

In the years since the Cortez was created, cultural values and considerations have drastically changed. Issues related to race, gender, and sexual orientation are treated with more care than ever before.

On paper, the Nike Cortez could be a perfect candidate for outrage, think pieces, or even renaming – but it isn’t. That’s in part because the story of the shoe’s origin isn’t widely known, but perhaps more importantly, most who are aware don’t view the shoe’s namesake as particularly important.

Miles Coltrane was born in Oregon, but he grew up in South Los Angeles. He started collecting Cortezes as a teenager — to date, he owns more than a hundred pairs. For him, the shoe’s name origin is a non-factor in its legacy.

“My family members, my friends, and their friends never saw an issue with it. I don’t see an issue with it either. We see it as the cultural icon it really is,” says Coltrane.

“I actually don’t know anybody who refuses to wear the shoe based on the name or the story behind the name.”

Coltrane’s primary associations with the shoe are his family and the community he grew up in.

He says, “I still kept in contact with a lot of my extended family, my cousins, my uncles. And, you know, whenever I would see their pictures, I would see this Nike shoe and this big swoosh – and it was always the coolest thing.”

In Nike’s vast catalog, one sticks out as particularly relevant: a series of shoes released in collaboration with L.A. tattoo and graffiti artist Mark Machado, more popularly known as Mister Cartoon.

Mister Cartoon has gained an international reputation for his art that celebrates Los Angeles, Chicano culture, and everything that lies at the intersection of the two.

Mister Cartoon has collaborated with Nike on a number of Cortezes — and on one he designed, he embraced the history of its namesake.

Cartoon removed the Nike logo and replaced it with the head of an Aztec warrior — with some European features. The mix celebrates the group of people who emerged out of colonization.

“I wanted to put a Chicano on the shoe – born in this land yet influenced by this other land – so it’s that mix that I put on the side. It’s a heavy thing for a shoe. It was really just about heritage and including the natives,” says Cartoon.

In the 50 years it’s been around, the Nike Cortez has had many lives – as an athletic shoe, a general purpose sneaker, and a fixture in entertainment – but its strongest associations today are a lot more personal.

“Sometimes I think that anybody in the U.S. of Latino origin knows somebody from L.A. that wore that shoe. If it’s a random picture in your grandmother’s photo album or something like that, that shoe is very prevalent,” says Miles Coltrane.

“It’s an ode to where my family came from, what I grew up with, and their values. It’s important for me to just keep that tradition going.”

For many, the shoe brings out feelings of reverence and nostalgia – for the shoe itself, but also for the communities that laid claim to it.