An Old Debate Renewed: Does The U.S. Now Need A Domestic Terrorism Law? 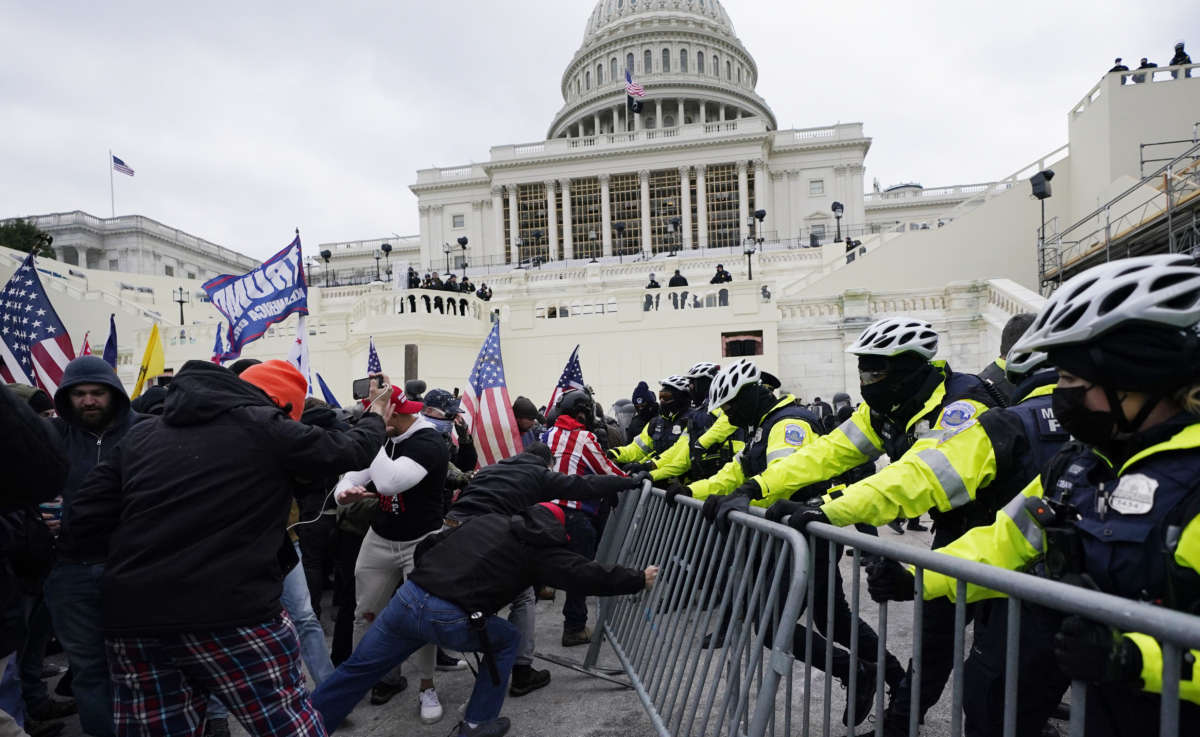 The Jan. 6 riot at the Capito has reinvigorated a long-running debate about whether the U.S. should have a domestic terrorism law. As a candidate, President Biden said he would seek such a law. Since Biden took office, his administration has said only that the matter is under review.
Image credit: Julio Cortez

More than 300 suspects from the Jan. 6 riot at the Capitol face a variety of charges — illegal weapons, assault, property damage and conspiracy. In the latest development, two men have been arrested and charged with spraying a chemical at policeman Brian Sicknick, who died the following day.

President Biden, speaking just days before he was sworn into office, described the mob as “domestic terrorists.” Yet no one will face a charge of domestic terrorism — because it doesn’t exist in U.S. law.

Bruce Hoffman at the Council on Foreign Relations has studied terrorism, in the U.S. and abroad, for decades. He believes it’s time for a domestic terrorism law — with caveats.

“Much as after 9/11, we recognized that we were in a new world, in a new era, and had to make signal adjustments. I think we’re in the same position now,” said Hoffman.

However, Hina Shamsi, head of the ACLU’s national security project, says it would be a mistake to enact such a measure.

After the al-Qaida attacks in 2001, Congress passed the Patriot Act which created broad powers to deal with extremists.

Shamsi argues those powers were too expansive and disproportionately targeted Muslims and other minority groups. She fears a domestic terrorism law would produce the same result.

“We can’t address white-supremacist violence effectively by doubling down or building up systems that already harm communities of color,” she said.

Some in Congress, mostly Democrats, are raising the possibility of a domestic terrorism law in the wake of the Jan. 6 assault on the Capitol and the overall increase in far-right extremism in recent years.

The debate resurfaces most every time the U.S. has a major terrorist attack, but a number of reasons are cited for not enacting legislation.

The FBI and other law enforcement agencies often say they have plenty of existing tools when it comes to prosecution. In addition, they say they don’t want to get involved in the business of deciding who is, and isn’t, a terrorist.

In the most notorious case of domestic terrorism, Timothy McVeigh’s 1995 truck bomb killed 168 people at a federal building in Oklahoma City. He was charged with, convicted of and executed for killing federal agents and other crimes — but not terrorism.

Still, Hoffman believes a new law would be a useful tool in defining and prosecuting politically motivated violence that is distinct from ordinary crime.

He also believes such a law could address the much lighter prison sentences that many far-right extremists receive compared to Muslim Americans for politically motivated offenses.

“I think that we have to bring greater equity to sentencing,” he said.

The U.S. has designated about 60 foreign terrorist organizations. A few are well-known, like al-Qaida and the Islamic State. Most are obscure. Many, though not all, are Islamist.

To make this legal distinction clear, someone acting on behalf of al-Qaida, whether a U.S. citizen or a foreigner, could be charged with a terrorism-related offense because al-Qaida is a designated terrorist group.

Yet someone carrying out a similar or identical act, but with no connection to a foreign terrorist group, would not be charged with domestic terrorism.

Hoffman stresses that he doesn’t think a domestic law should create a list of U.S. terrorist organizations.

“I don’t think we should get into the business of designating terrorist groups as we do with overseas groups. That opens up a Pandora’s box,” he said.

Over the past two decades, the battle lines in the debate over domestic terrorism have shifted.

After 9/11, Republicans tended to push hardest for the most expansive security measures, while Democrats were the ones most often raising concerns about civil liberties. Today, Democrats often lead the call for a domestic terrorism law, while Republicans are questioning law enforcement tactics.

At a Senate Homeland Security Committee on March 3, several Democrats criticized Jill Sanborn of the FBI’s Counterterrorism Division, saying the bureau failed to identify the threat in advance of the Jan. 6 riot.

In contrast, Republicans questioned whether the FBI was acting too broadly in the aftermath by collecting information like cell phone data on those present that day.

“If you see John Smith on a video, I’m fine with looking at his records,” said Rand Paul, the Kentucky Republican. “My question is, did you have a generalized collection of data about people who were on the Hill on January 6th?”

Sanborn responded: “Not that I’m aware of. I do know that we have used data and this is reflected in some of the charging documents that had geolocation data.”

Paul expressed skepticism at her answer. “These are important questions. The Fourth Amendment’s out there to protect against generalized searches,” he said.

The Biden administration has not yet indicated how it might act. As a candidate, Biden said he would seek a domestic terrorism law. As president, his administration says only that the matter is under review.