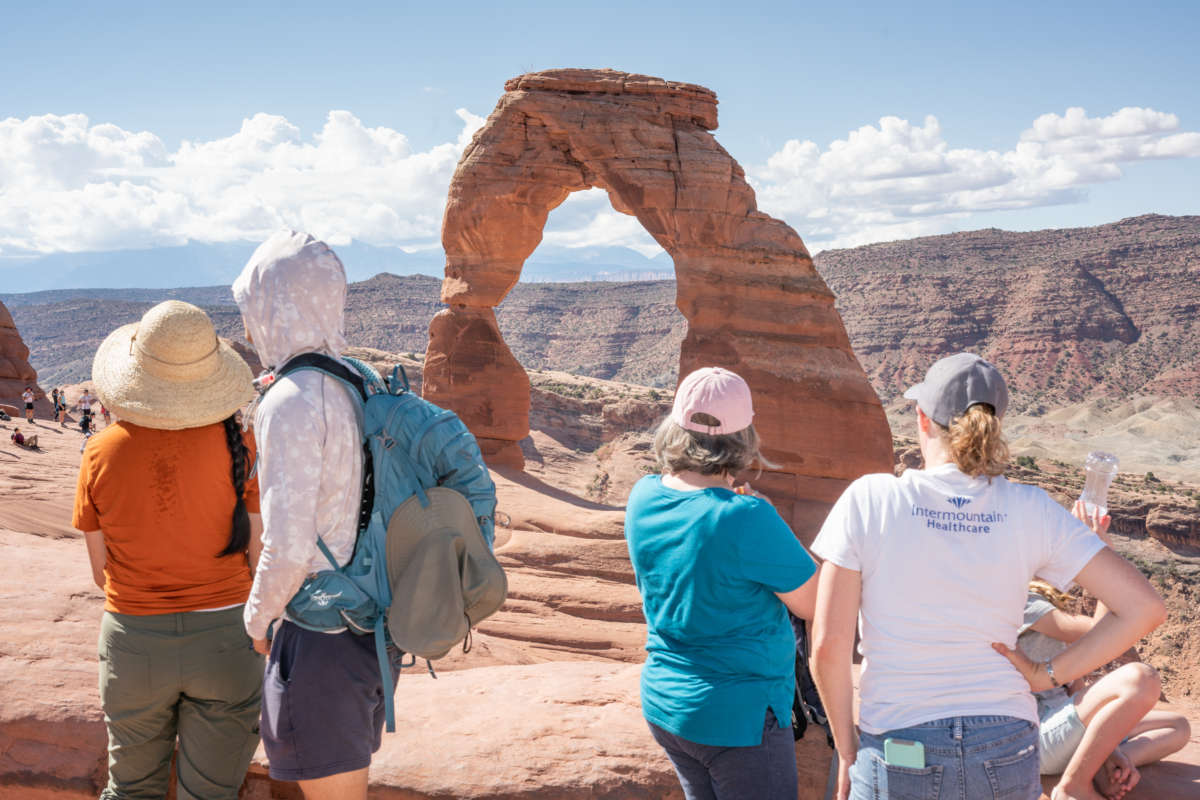 The sun has risen over Delicate Arch, a famous, hulking mass of red sand stone you might remember best as having once been an ubiquitous screen saver.

The miles-long climb for a family photo in real life beneath the 52-foot-tall behemoth is worth it for Judy Lee and her daughter Lindsey Cho. They’re on a road trip through the Southwest from their home in Orange County, Calif.

“It’s almost our turn, woohoo!” Cho says, while she and her mom take sips from their water bottles.

The anticipation is real. Delicate Arch in this soft morning light is awesome.
Spin around though and there’s perhaps a less inspiring view: a line nearing a hundred people deep all waiting to take the exact same photo that makes it look to friends and family back home that they’re here in solitude.

“I think people have been inside a lot for the past year so they’re eager to come out into nature as much as they can,” Cho says.

She and her Mom don’t mind the crowds, even a two hour early morning wait for the shuttles at their previous stop, Zion National Park was a chance to visit and mingle after months of lockdowns.

“I miss doing that, you get to meet people from all over,” Lee says.

Parks are fielding crowds, lots of litter, and human feces on the trails

The Park Service no doubt appreciates their patience, as it grapples with how to manage an explosion in visitation at parks from Utah to Maine since the pandemic. In Arches, there is record visitation this summer even without the dependable crowds of Europeans who’d normally be here despite the blistering heat, were it not for the pandemic. The last nine months have been Arches’ busiest since becoming a national park in 1969.

Indeed it’s one pandemic trend that doesn’t appear to be ending. Some parks –such as Glacier in Montana and Rocky Mountain in Colorado — have moved to timed entries at some locations.

There’s renewed pressure on other popular parks such as Arches to take similar steps.

In Yellowstone, which reported its busiest May ever, photos on social media show mile-long lines of idling cars and RVs at entrance gates. In perennially busy parks like Yosemite and Zion, visitors and staff alike complain of an increase in litter, toilet paper and human feces on trails.

Parks like Arches and nearby Canyonlands are also seeing an uptick in first time visitors, some of whom don’t seem to understand the parks’ environmental protection mission or that wildlife are indeed wild, while others arrive ill prepared for the harshness of nature.

“A lot of the first time visitors are just not familiar with national parks and our mission to preserve these resources,” says Angie Richman, chief of education, interpretation and visitor services at Arches and Canyonlands.

Most mornings by 8 a.m., Arches is forced to close its lone entrance gate because parking lots are already filled and most trails are at capacity. Some days the gate can stay closed for up to five hours.

Do you have a reservation?

One early morning, Amy Hill of North Carolina was relieved to get in. She and her husband rose before dawn after guests at their hotel warned them to get here early or risk not seeing Arches at all. It was a bucket list stop on a tour where they also planned to visit the the Grand Canyon and Mesa Verde national parks.

“I think [it] would be better to have a reservation and know that you were going to be able to get in rather than getting here and not being able to get in at all,” Hill says.

A reservation system was proposed here a few years back but then it was scrapped due to controversy that it might limit public access and hurt local tourist businesses.

But today Arches feels like it’s at a breaking point. A timed entry or ticketing system is now back on the table, along with other ideas like mandatory or voluntary shuttles and even a new road that some argue could help ease congestion through the park’s remote canyons and stunning red rock formations.

Richman says the current daily closures were never meant to be a long-term solution.

“Initially it was intended to just happen on our busy holiday weekends and prior to COVID that was the case,” she says. “But since, we’ve been so busy we’ve now had to close almost every day since March.”

More people are visiting national parks, but fewer people are working at them

The overcrowding crisis comes at a time when national parks are struggling to fill positions — from interpretive rangers to law enforcement, right down to the workers Richman can’t find to staff the entry gates and collect fees.

The Park Service has been plagued by budget woes for years, and the agency hasn’t had a permanent, Senate-confirmed director in more than four years. The Biden administration has yet to nominate anyone either.

In nearby Moab, help wanted signs are also posted along Main Street, including at the popular Back of Beyond Books. Owner Andy Nettell spent most of his career as a Park Service ranger.

“I don’t think they’ve done a very good job of seeing the trends and meeting those trends,” Nettell says. “How do we manage these millions of people, we can’t just increase the size of the parking lots.”

Business owners and elected officials in this famous adventure tourism town are now worried that long term, visitors might stop coming because services are limited and the natural beauty is getting trampled.

The mayor and city council as well as the Grand County commission have pressed the park service to get a timed entry system in place at Arches as early as Labor Day. Arches officials haven’t yet committed to a time frame for releasing a longer term proposal to the public.

Still, according to a range of interviews with business owners, local leaders and visitors, most everyone seemed to agree that the crowds that have built and built over the years are now seriously threatening the very thing national parks were set aside to protect.

“I think because more than ever with the pandemic, people are trying to get in here and there’s an influx that they should regulate it to a certain extent,” says Ollie Hays.

She was visiting Arches with her husband and family as part of a summer road trip through the West from their home in Virginia. They got to the Windows Arch trailhead parking lot by 7 a.m. and barely got in.

That morning the family suddenly found themselves pining for a previous stop they made a few days back in a wilderness area in Colorado. It was serene and mostly empty. Maybe it’s time for Americans to spread out a bit, they said.

“There’s so many things to be seen that are not national parks,” Ollie says.