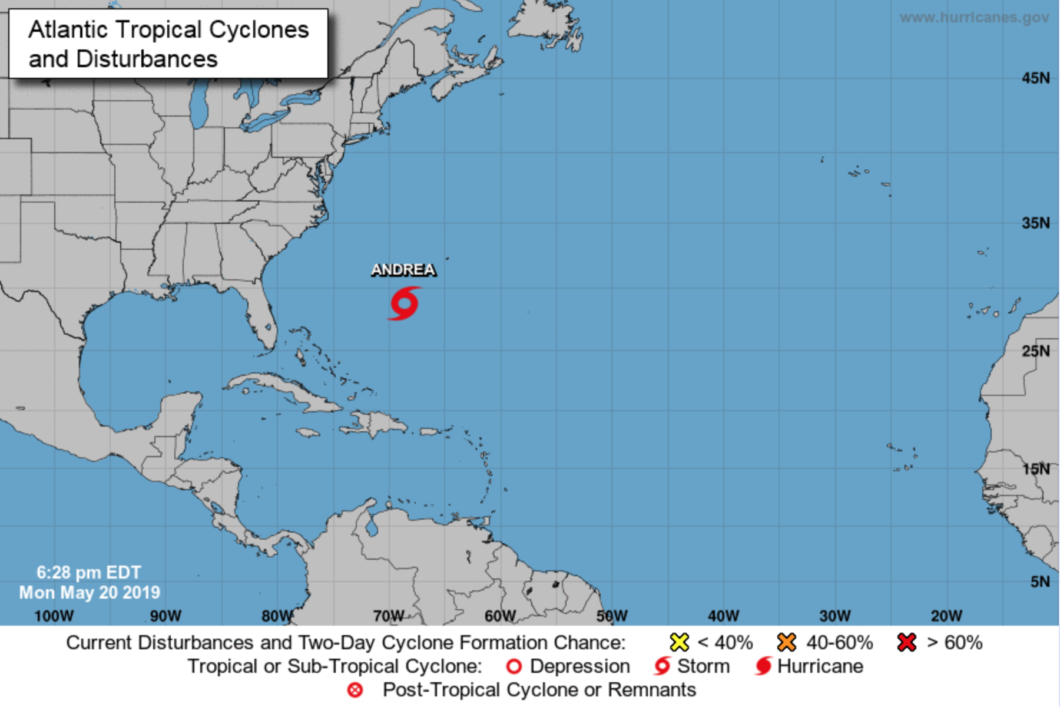 The National Hurricane Center says the first storm of the season-named Andrea-has formed in the West Atlantic.

That’s two weeks before the official start of hurricane season.

The storm is sustaining winds as strong as 40 mph and is moving north.

Even with this movement, the center of the storm is expected to stay south or southwest of the island over the next two days.

Subtropical Storm #Andrea has formed over the western Atlantic. While some slight strengthening is possible tonight, the system is forecast to dissipate by Wednesday while it moves to the southwest or south of Bermuda. More info at https://t.co/tW4KeFW0gB pic.twitter.com/d6hKaD8nGD

Meteorologists predict the storm could strengthen overnight on Monday, but then will start to weaken by late Tuesday.

By Wednesday subtropical storm Andrea should be cleared up.

There are no coastal watchings or warnings in place at this time. There are also no hazards to Florida although people in Bermuda should remain vigilant to the progress of the storm.

The NHC says the storm is not expected to turn into a tropical cyclone over the next five days.

Subtropical Storm #Andrea (pronounced AN-dree-uh) has formed in the western Atlantic, but is no threat to #Florida or the #US. Possibe impacts to #Bermuda at https://t.co/mbzT78mkc3 #FLwx pic.twitter.com/V1wLqK3dAg

The official start to the hurricane season is June 1.

This is a developing story. Please check back for updates.