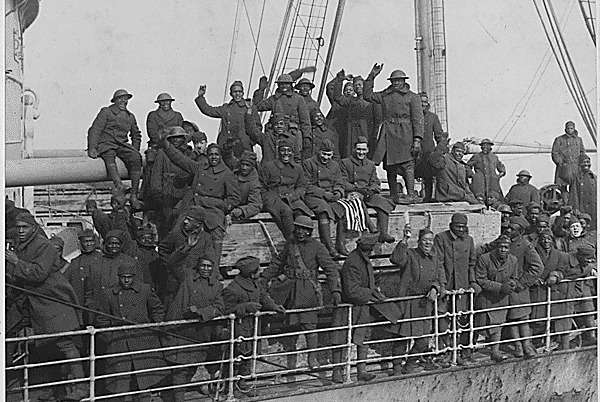 Members of New York's famous 369th Infantry Regiment wave as they come back home from France.

They helped their country fight for freedom, although they were denied it at home and served in a segregated Army unit. But the Black men of the 369th Infantry Regiment, widely known as the Harlem Hellfighters, fought with valor and skill — and their accomplishment has now been recognized with a Congressional Gold Medal.

Their reputation on the battlefield

“We did not give ourselves our name [the ‘Harlem Hellfighters’],” Col. Reginald Sanders, a former commander of the 369th Sustainment Brigade, which descended from the World War I unit, told NPR in 2014. “Our enemies gave us our name, [which] is an honor.”

The Germans called them Hollenkampfer, sparking the nickname that became official earlier this year.

“They are devils,” a captured Prussian officer said, according to a U.S. Army report. “They smile while they kill and they won’t be taken alive.”

The Black Americans racked up a series of legendary accomplishments. They saw 191 days of combat — the most of any similarly sized U.S. military unit. They fought hard and moved quickly, becoming the first Allied unit to reach the Rhine River.

How they fought, and were celebrated, despite racism

Hellfighters fought with distinction — not alongside their fellow Americans but with the French army, “because many white American soldiers refused to go into combat alongside Black Americans,” according to a news release from Sen. Kirsten Gillibrand’s office.

Their exploits made them famous in France and the U.S. Two regiment members, Cpl. Henry Johnson and Pvt. Needham Roberts, became the first Americans to be awarded the Croix de Guerre after fighting off a German advance, according to the National Archives. The entire unit later received a Croix de Guerre for taking the French town of Séchault. More than 170 officers and men also received individual medals.

When the Hellfighters left New York, they had been barred from participating in a military parade. When they returned, their white commander, Col. William Hayward, helped arrange a welcoming parade down Fifth Avenue in New York City.

Both chambers of Congress approved the commendation this summer, in a bipartisan effort that drew dozens of co-sponsors.

The measure’s main sponsors include Rep. Joyce Beatty, D-Ohio, who chairs the Congressional Black Caucus; along with Sen. Gillibrand and other members of New York’s delegation.

This story originally published in the Morning Edition liveblog.