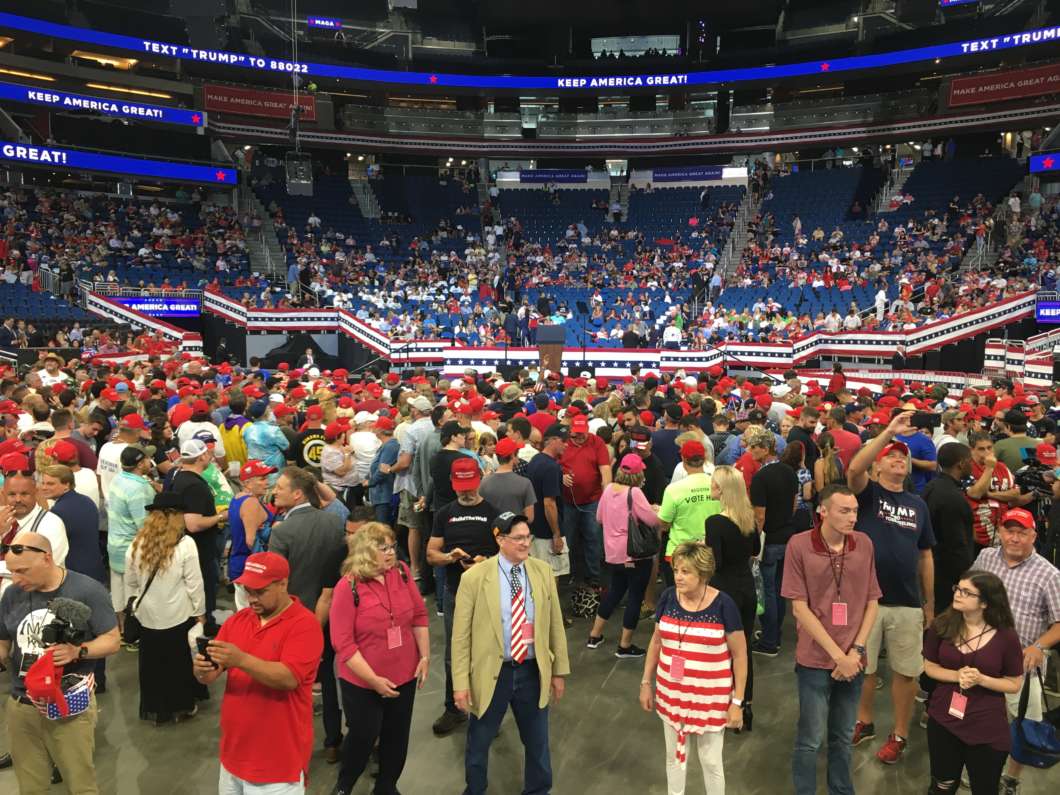 Thousands of Trump supporters showed up in ‘Make America Great Again” hats and t-shirts to cheer on the commander in chief’s re-election bid.

Speaking to the crowd at Orlando’s Amway Center, Trump railed against the Mueller investigation, repeated calls for a southern border wall and promised to drain the swamp.

“Thank you Governor Ron for ending that disaster.”

Before Trump took the stage, Vice President Mike Pence and Trump’s sons rallied the crowd while Apopka-based Pastor Paula White prayed for the President and his campaign.

About an hour into his speech, president Trump told the crowd at the Amway Center he was launching his re-election campaign.

Trump: I stand before you tonight to officially relaunch my campaign. #TrumpRallyOrlando @wmfeorlando

Trump began his speech by thanking supporters for turning out on a Tuesday night.

Trump’s speech ranged along familiar themes: the Mueller investigation, building the wall, draining the swamp, and taking aim at the media.

Vice President Mike Pence told a near capacity crowd at the Amway Center that with their help, President Donald Trump would be re-elected.

Trump’s sons Eric and Donald, Jr. rallied the crowd ahead of the President’s appearance.

Eric Trump said the campaign will make many stops in Florida leading up to the 2020 election.

Trump supporters are beginning to file into the Amway Center in downtown Orlando ahead of the president’s announcement of a 2020 re election campaign .

The arena is filling up this hour with thousands of supporters in red hats and Trump tee shirts.

Trump’s son Eric warmed up the crowd outside the arena as supporters waited for hours, some days, to get in.

Vice President Mike Pence is also expected to speak at the rally announcing the bid for a second term.

Trump is scheduled to take the stage tonight at 8.

Protesters gathered across Orlando ahead of the event.

The inside of the downtown arena where the NBA’s Orlando Magic play is draped with red, white and blue. Many supporters are wearing red campaign baseball caps.

Trump tweeted as many as 74,000 requested tickets to the event, although the arena’s capacity is 20,000.