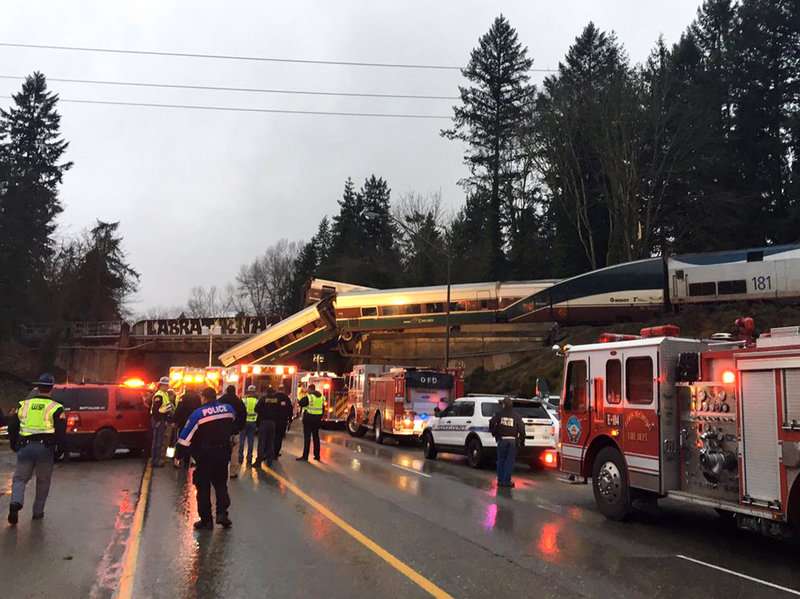 An Amtrak passenger train has derailed on an overpass in Washington state, falling partly onto an interstate freeway east of Olympia. The Pierce County sheriff’s office has confirmed that “injuries and casualties” have been reported on site, where at least one train car is dangling onto the major roadway.

There were “multiple fatalities” in the crash, according to Pierce County Sheriff’s office spokesman Ed Troyer. He added that the fatalities were confined to the train itself and that it does not appear that any motorists were killed.

“Multiple cars and trucks were struck by train cars that left the train tracks and went down onto the road,” Troyer said. “The people that were in all the vehicles –even though when you see the pictures, it’s pretty horrific — at this point, nobody in any of the vehicles is a fatal.”

Amtrak identified the derailed vehicle as Train 501, which offers high-speed service from Seattle to Portland. The train had “approximately 78 passengers and five crew members on board” when it derailed around 7:40 a.m. local time.

“Emergency services are on the scene and Amtrak management is responding,” the company said in a statement.

“This was the first day this Amtrak train was going to start taking a more inland route following the freeway,” NPR’s Martin Kaste reports. “Before this, it used to kind of snake along the edge of Puget Sound but that slowed things down. This was supposed to be a faster, more direct route, but something clearly went wrong.”

The shift in route was met with deep skepticism from some residents in the area after it was announced. Indeed, as local media noted earlier this month, Lakewood Mayor Don Anderson even predicted a deadly accident would come of it.

“Come back when there is that accident, and try to justify not putting in those safety enhancements, or you can go back now and advocate for the money to do it, because this project was never needed and endangers our citizens,” Anderson said, according to a local ABC affiliate.

For now, authorities are asking onlookers to stay away from the scene while first responders work. Amtrak posted a number for people inquire about any friends and family who were on Train 501.

“We’re praying for everyone on board the train, and ask everyone to hold them in your thoughts,” Washington Gov. Jay Inslee tweeted, adding his thanks to first responders on the scene — and a warning to motorists to avoid the “ongoing and serious emergency.”

The National Transportation Safety Board also notes it is opening an investigation into the incident.