Among The 1st To Get A Polio Vaccine, Peter Salk Says Don’t Rush A COVID-19 Shot 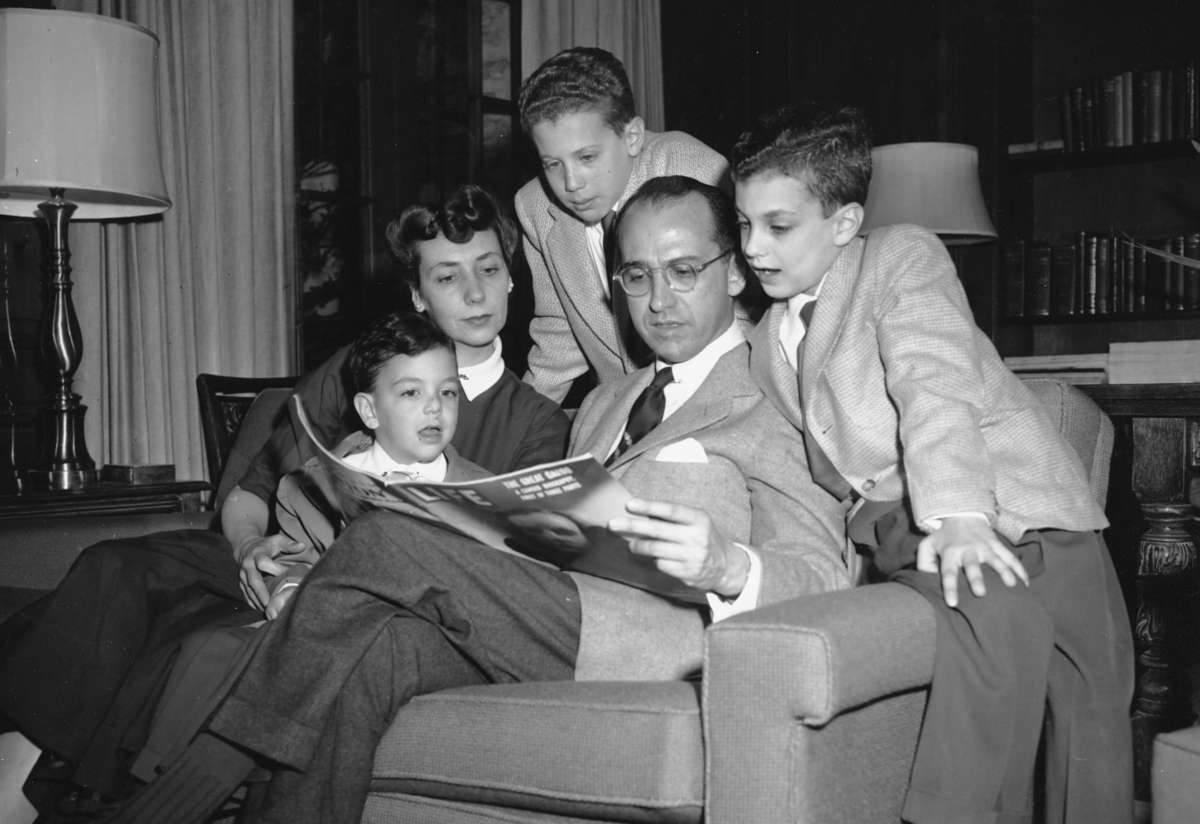 Dr. Jonas E. Salk, who discovered the polio vaccine, reads with his wife and three boys in their Ann Arbor, Mich., home on April 11, 1955. The boys were among the first vaccinated during testing. The family was photographed the night before an announcement the vaccine was effective. Pictured from left are Jonathan, 5; Donna Salk; Peter, 11; Salk; and Darrell, 8.

When Dr. Jonas Salk first began testing his potential polio vaccine in 1953, he brought it home from his nearby lab at the University of Pittsburgh.

“I just hated injections,” recalled his son Peter Salk, 76, and the oldest of three brothers. “So my father came home with polio vaccine and some syringes and needles that he sterilized on the kitchen stove, boiling them in water, and lined us kids up and then administered the vaccine.”

Peter Salk, then 9, wasn’t old enough to understand fully why he and his brothers were getting this injection. Yet he remembers that shot like no other.

“Somehow the needle must have missed a nerve, and I didn’t feel it. And so that has fixed that moment in my mind,” he said.

As the world awaits a vaccine for COVID-19, Salk recalled an era when polio terrorized the country every summer.

Kids were hit hardest. In the worst single year, 1952, nearly 60,000 children were infected. Many were paralyzed, and more than 3,000 died. Frightened parents kept their children away from swimming pools, movie theaters and other public places.

When Salk and his brothers were injected, it marked the beginning of the end of polio. But it was a protracted process. What followed was the largest human trial ever, with nearly 2 million American children receiving the potential vaccine. Finally, on April 12, 1955, nearly two years after the Salk boys had received their shots, the vaccine was declared “safe, effective and potent.”

“What happened in the country at that moment was remarkable. There was jubilation,” Salk said. “There was such a sense of relief that this fear, which had been hanging over everyone’s heads for years and years and years, was finally lifted.”

It’s one of the great vaccine success stories, and Jonas Salk became one of the most celebrated men in America.

Polio was effectively wiped out in the U.S. by the early 1960s. Since then, it’s been steadily eliminated around the world. These days, only a small number of cases crop up annually, mostly in Pakistan, Afghanistan and Nigeria.

A word of warning

Peter Salk, who lives in La Jolla, Calif., is also a doctor and a part-time professor of infectious diseases at the University of Pittsburgh, and he heads the Jonas Salk Legacy Foundation.

To stay safe, he continues to hang out at home with his wife, Ellen, even as government restrictions ease and shops and restaurants in the area begin to reopen.

Given the long family experience in this field, Peter Salk said he is optimistic about a COVID-19 vaccine. But he cautioned about racing ahead before one is fully tested.

“I congratulate the impulse on the part of the federal government right now to want to speed things up as much as possible,” he said. “What concerns me is knowing that in the past there have been unexpected things that have taken place with vaccines that had not been foreseen.”

His father, who died in 1995, worked on his vaccine for seven years before it was approved. His research was funded by charitable donations, and he didn’t seek a patent.

When journalist Edward R. Murrow asked Jonas Salk who owned the patent, the doctor replied: “The people, I would say. There is no patent. Could you patent the sun?”

Then, as now, the need to vaccinate was urgent. But there were delays, Peter Salk noted.

“The vaccine was introduced, but haltingly. It wasn’t done the way my father would have liked to have seen — ‘Let’s just get this out and get it into every single child’s arm,’ ” Salk said.

At one point, a government health official was called before a Senate committee and asked why it was taking so long. Jonas Salk picked up a book and cited a passage about the episode:

“As to her failure to anticipate the need for adequate supplies of vaccine earlier than she did, she replied heatedly, ‘I think no one could have foreseen the public demand.’ “

Peter Salk said it took roughly a decade for the polio vaccine to be researched, tested and widely distributed to the American public. He said he hopes it will happen much faster this time.