Amid Warnings Of Ethnic Cleansing, A Yazidi Man’s Suicide Resonates 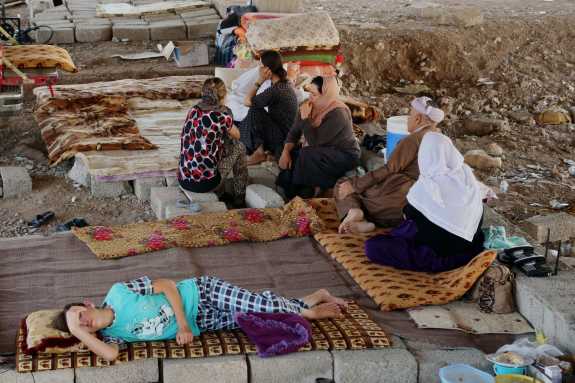 Displaced Iraqis from the Yazidi community settle under a bridge in central Dahuk, Aug. 14. Human rights activists say evidence of the Islamic State's violence against the Yazidis points to war crimes, and amounts to ethnic cleansing.
Image credit: Khalid Mohammed

With so many members of Iraq’s Yazidi religious minority killed, abducted or left homeless in recent weeks, one more death – due to a self-inflicted gunshot wound – might almost pass unnoticed. But friends and family of 33-year-old Naif Khalif Omar say his suicide is resonating in a community that sees only a bleak future ahead.

In a long white funeral tent in Deraboun, a haphazard collection of makeshift encampments lining the road to Syria, Omar’s father, Khalil Omar Khalifa, sits with family and friends who hail from one of the Yazidi villages around Mount Sinjar that were brutalized by Islamic State fighters last month. On the question of why Omar killed himself, opinions are divided.

Some say the final straw happened at the camp at Deraboun. Omar had survived the worst of the violence and hardship, and had landed a job in the camp’s kitchen. But when the World Food Program closed the kitchen, Omar was out of work. His father, though, says it was the senseless, random killings, the abduction and abuse of women, and the terror-stricken flight up Mount Sinjar and then back down again that caused something to snap in a once-healthy young mind.

“By the time we got here he was psychologically hurt somehow,” says Khalifa. “He didn’t eat much, he stopped talking. It was just too much for him.”

In An Instant, Lives Scarred Forever

While Iraqi officials celebrate military gains against the militants calling themselves the “Islamic State,” human rights advocates warn of perilous circumstances for hundreds of thousands of displaced people in the north, especially those from the Yazidi religious minority, a group that has been persecuted for centuries for its unusual beliefs. Omar’s suicide is a stark example.

Khalifa says his son was fine back in the village, working as an Iraqi border guard and preferring to spend much of his spare time at the family farm, tending crops and working the fields. Another villager who knew Omar, Ibrahim Fundi Ibrahim, is a 30-year veteran of the Iraqi army. He blames the security forces for abandoning the village, bringing on the chaos and trauma that claimed Omar’s life.

“We left with nothing, just our lives,” Ibrahim says. “And when he came here he sees the children crying, every time the TV is on people are being shot or beheaded.”

“Now we’re sitting in his funeral tent,” he adds. “This is like a five-star hotel compared to where other people are – look over there, people living under a truck. This isn’t right.”

Omar’s father wants to return to the village, if it can be made safe. Many others, like Ibrahim, don’t think it’s possible.

“OK, maybe they’ll take Sinjar back but what about our women?” he asks. “They’ve been sold! They’re in the Arab Gulf countries, they bought our women, can you believe it? How can we stay here?”

Ibrahim and other Yazidis call it genocide. Human rights advocates say the evidence points to war crimes. Donatella Rivera with Amnesty International says what happened to the Yazidis in the Sinjar region is a “momentous” example of ethnic cleansing.

But as for the anecdotes about Islamic State fighters being modern-day slave traders, she treats those allegations cautiously, believing most are being held in Iraq.

“We know where the overwhelming majority of the women who’ve been abducted are, there are communications,” says Rivera. “But some of them are missing, and those are the ones that obviously we’re particularly concerned about. Certainly the families are very concerned about the possibility that these women and girls may be subjected to sexual abuse, and to be forcibly married, for example to fighters.”

Rivera doesn’t believe that has happened yet in most cases, but says the plight of these women and girls remains dire.

Some semblance of normal life can be found amid the lean-tos and blankets lining the streets near the Syrian border. In a concrete irrigation trough, young boys splash about, striking goofy poses for passersby.

But Yazidi families wonder how many young people will bear lasting scars from what they’ve witnessed in the past few weeks. Others wonder about the international response to this crisis, which Rivera describes as “extremely slow.”

In a better world, Naif Khalil Omar would have received psychiatric as well as basic medical care. He might have decided that he did have a reason to live – perhaps for his wife and infant daughter, who were not among those taken by the Islamic State.

But on a dusty roadside in the desert, where people sleep under trucks or do whatever it takes to get through another day, one young man who survived unthinkable horrors had no one to help him survive his own memories.