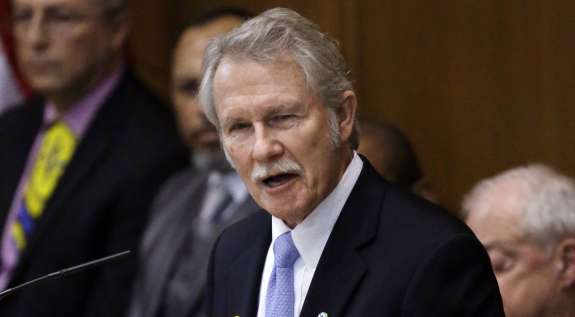 Consumed by an influence-peddling scandal, John Kitzhaber, Oregon’s only four-term governor, has resigned.

Oregon Public Broadcasting reports that Kitzhaber made the announcement in a statement. The station reports:

“‘I apologize to all those people who gave of their faith, time, energy and resources to elect me to a fourth term last year,’ said Kitzhaber.

“[Secretary of State Kate Brown] will serve as interim governor until 2016, when voters will elect their next leader.

Kitzhaber, a Democrat, had for weeks resisted calls for his resignation, but, yesterday, he lost the support of two of the state’s most prominent Democrats — Senate President Peter Courtney and House Speaker Tina Kotek.

Kitzhaber’s resignation is in a lot of ways the climax of a strange political story that began last fall, when the first lady admitted that she had received $5,000 to marry a an Ethiopian man who wanted a green card.

Since then, report after report has emerged about how the first lady may have used her access to the governor’s mansion to make money. Oregon Attorney General Ellen Rosenblum has started investigating Kitzhaber and Hayes.