Americans Can’t Visit North Korea. Some Who Have Family There Hope Biden Changes That 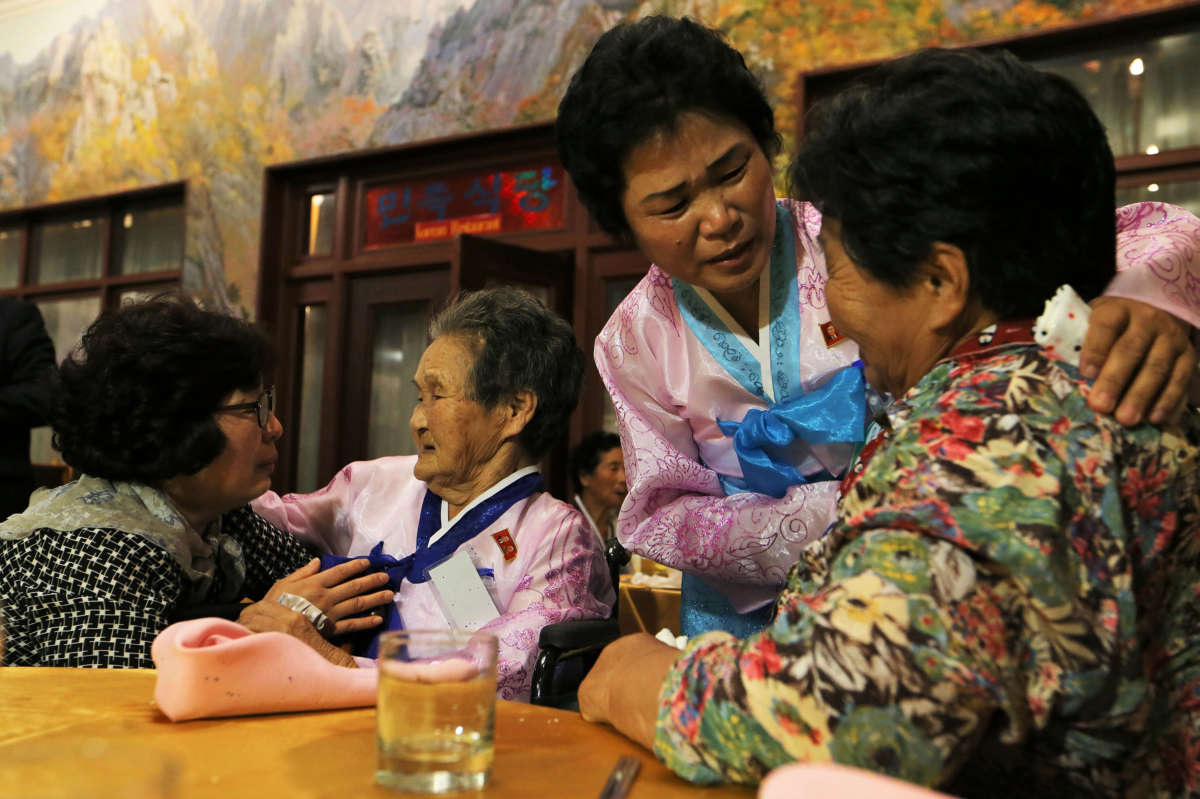 North Korean Kang Ho-Rye (second from left), 89, hugs her South Korean relative at a resort at Mount Kumgang, North Korea, in August 2018. Almost 100 South Koreans crossed the armed border to the North to meet their separated families. The U.S. bars citizens from entering North Korea, but some Korean Americans hope the Biden administration will lift the ban and let them visit again.
Image credit: Lee Su-Kil

SEOUL — The Biden administration has to decide by the end of the month whether to renew a ban on U.S. citizens traveling to North Korea, and Americans with relatives in North Korea are eagerly awaiting the decision.

They include Kate Shim, who immigrated to the United States from South Korea in the 1970s. After the Korean War, her uncle was missing and her family believed he was in North Korea.

Shim says her great-grandmother told her father: “You need to find your brother because I know he’s alive.”

Shim’s brother managed to track down their missing uncle in North Korea in the 1980s, finally reuniting him with his mother after more than 30 years.

In 1989, Shim started visiting relatives in North Korea, too.

“They were alive, and I was so happy to see my cousins,” says Shim, 62. “We didn’t care about, like, what politics, what kind of government we are under. We’re just happy to see them.”

In the 1940s and 50s, the division of Korea into two countries and the Korean War left as many as 10 million Koreans separated from their families. U.S. officials estimated in 2001 that the figure included 100,000 Korean Americans, but the number has dwindled as their communities age.

For many of the remaining members of that divided generation, time is running out to reunite with their relatives separated by geography and clashing governments.

Travel was banned after Otto Warmbier

The U.S. has barred the use of an American passport to enter North Korea since 2017, making limited, one-time exceptions for some citizens such as aid workers and journalists.

The Trump administration enacted the ban following the June 2017 death of American college student Otto Warmbier after his release from detention in Pyongyang.

North Korean authorities arrested Warmbier in January 2016 and sentenced him to 15 years of hard labor for taking a propaganda poster in a hotel in Pyongyang. After being in custody for more than a year, the 22-year-old was flown home in a coma and died shortly after. North Korea has denied accusations of torture.

Last year, when Biden was a candidate, he said in an op-ed that as president he would work “to reunite Korean Americans separated from loved ones in North Korea for decades.”

The administration has not commented on what it will do about the travel policy.

In a statement to NPR, the State Department said it renewed the restriction in September 2020 “due to continuing concerns over the serious risk of arrest and long-term detention in North Korea.” The ban will expire on Sept. 1 unless the secretary of state extends or revokes it.

(The government’s travel advisory also says not to visit North Korea now because of COVID-19.)

Some experts on North Korea believe the threat of detention remains, and so should the restriction.

“At this moment, there’s no reason to get rid of the travel ban,” argues Anthony Ruggiero, a former National Security Council director for North Korea. He says Pyongyang has not abandoned its practice of detaining Americans as it hopes to secure political leverage over Washington.

Some previous detentions have required former presidents, including Jimmy Carter and Bill Clinton, to travel to North Korea to secure their release and bring them home.

The ban should only be lifted “when North Korea is more of a normal country, that doesn’t kidnap people.”

Ruggiero doesn’t think allowing people-to-people exchanges will help persuade the government of Kim Jong Un to give up its nuclear weapons and missiles programs.

Other observers argue that reopening travel could be a start.

“The U.S. is saying we want the North Koreans to come to the table,” notes Daniel Jasper, the Asia public education and advocacy coordinator at the American Friends Service Committee, a Philadelphia-based peace advocacy group. “In order to do that,” he says, “we have to get back to baseline level of engagement, or North Koreans will continue to understand that to mean that the U.S. is not really sincere in their attempts to engage.”

Meanwhile, advocates and lawmakers have pushed for help reuniting divided Korean families. A bill is now before the Senate that would require U.S. officials to consult with Korean Americans on progress on these efforts.

Opening up helps to seek closure

Although official visitor figures for North Korea are hard to find, one tour operator estimated as many as 1,000 Americans went annually, according to news reports before the ban took effect.

One of the lucky ones who made it was Choon Lim. He was born in Nampo, North Korea, and fled to South Korea during the war. He later settled in Chicago.

In 1998, he visited North Korea hoping to find his father, but discovered he had died six years before.

When it came time for Lim to pour an offering of liquor before his father’s ashes, he froze for an instant, that felt like an eternity.

“All those 47 years, what I have experienced, how I lived, how we lived in the South, all those things came down through my head. And I collapsed. I couldn’t do it,” remembers Lim, who is 75.

“I worked for helping separated family members visiting North Korea,” he says, “because every one of the separated families should have the same kind of a closure that I had.”

Waiting for a peaceful resolution

Ed Kang is also in favor of ending the travel ban. Born in 1934, he grew up in a Christian family in Pyongyang. He fled to avoid persecution under the communist regime, walking with his father the roughly 120 miles to Seoul in the winter of 1950.

“Many times, I was almost killed, but I survived,” Kang recalls. “I saw the hand of God, protecting me and guiding me.” Kang became a Presbyterian minister in the U.S., and returned to North Korea several times to visit his mother and younger brother, after being separated for more than 30 years.

He says the travel ban is causing unnecessary suffering, and removing it would be “making a contribution to a kind of peaceful resolution between the U.S. and North Korea.”

Even if the ban is lifted, though, North Korea remains closed to the outside world, due to the pandemic. It has stopped answering hotline connecting it with South Korea, and says it is “not even considering” negotiations with the U.S.

Se Eun Gong contributed to this story from Seoul and Michele Kelemen from Washington, D.C.