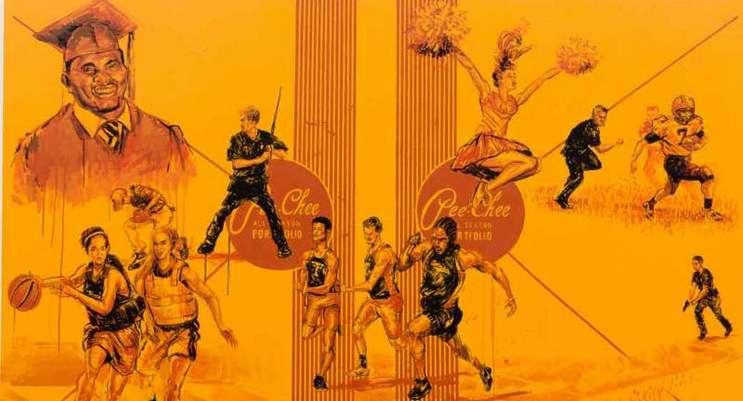 Image:Patrick Martinez, "all american class of 2016," courtesy of the artist and Charlie James Gallery

Hanging through September 10 at the Cornell Fine Arts Museum is American Memorial, the first solo exhibition by young Californian artist Patrick Martinez. In this survey of his work thus far, Martinez has created relics that speak to his generation’s political anguish.

Those ubiquitous plastic-backed “CHECK CASHING” neons are reconfigured to speak hip-hop lyrics. A series of sheet cake sculptures are adorned not with a smiling grad’s photo in frosting, but with portraits of survivors of street violence. On a 5-foot-tall version of the archetypal Pee-Chee folder, the drawings of idealized high-school athletes are interspersed with scenes of police brutality taken from the headlines.

Martinez’s work is infused with the resistance politics of 1970s Chicano art, befitting his Los Angeles upbringing, though he wasn’t born until 1980, so the texts he works with are not the speeches of César Chavez, but the songs of Tupac Shakur; his visual references are not Diego Rivera murals, but East L.A. gang graffiti.

Out of the everyday vernacular of ordinary things, Martinez assembles a new language – adapting, signal-boosting, and remixing the languid commonplace into urgency. It isn’t subtle stuff, but one effect of our current caustic political discourse is art in reply that is equally harsh.