Amendment 1: Boon For Environment But Quandary For Legislators 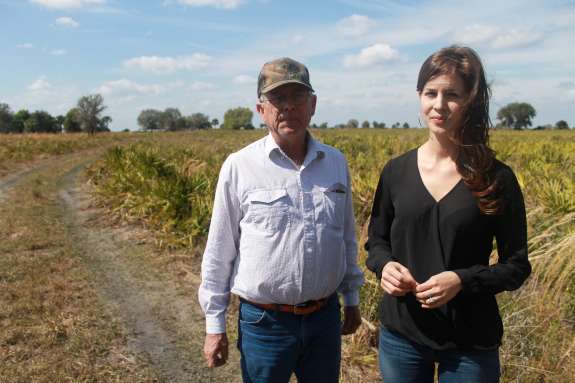 Lee Adams and his daughter LeeAnn hope Amendment 1 will help them preserve the untouched land of Adams Ranch. Photo by Amy Green

Among the biggest decisions lawmakers face as the legislative session starts Tuesday is how to implement the nation’s largest state-based conservation effort.

But not everyone agrees on how the money should be spent.

There are still places in Florida that exist as they did a century ago.

One of them is in Osceola County, not far from Walt Disney World, on Adams Ranch.

Lee Adams worked the ranch for 45 years. He describes the scene.

“We’re looking out across a scene where it’s palmetto flatwoods as far as you can see to the horizon. It’s interspersed with shrubs like gallberry and huckleberry, and then it has grasses like gamagrasses and wire grasses,” he says. “This used to encompass an area that went from Kissimmee all the way to Okeechobee.”

Adams Ranch is the nation’s 12th-largest cattle ranch, spanning 40,000 acres from Florida into South Georgia. It’s been in the family since 1937. But Lee Adams says Florida’s ranching heritage is at risk as sky-rocketing property values sway ranchers to sell to developers.

That’s why for the past decade the family has worked with environmentalists to preserve Adams Ranch through conservation easements. Lee Adams hopes Amendment 1 will help.

“Amendment 1 is going to have a lot of challenges in Tallahassee this spring. Everybody wants a piece of it.”

Under Amendment 1 part of the tax you pay when you buy or sell a house will fund land conservation for 20 years. The value this year alone is estimated at $757 million dollars.

The amendment directs the Legislature to allocate the money. The question now is how should the money be spent.

Some want it for land conservation. Others like Sen. David Simmons of Altamonte Springs says now is the time for a statewide water plan. He wants funding for new septic tanks and other projects for Florida’s ailing waterways.

“Water is the common thread throughout our lives here in Florida, and we need to make sure that it’s preserved first. I believe that purchasing land is of course an element of this, but let’s do that which needs to be done first.”

But some environmentalists say voters never intended Amendment 1 funding for septic tanks. Other environmentalists are mounting a campaign calling for funding to buy up U.S. Sugar land for Everglades restoration.

Will Abberger is chairman of the coalition pushing the amendment. His fear is Amendment 1 funds will replace existing environmental funding.

“This is I think very clear on the part of the 4.2 million people who voted for Amendment 1 that this should be new funding for water and land conservation in Florida.”

Florida once led the nation in land conservation with programs like Florida Forever. Proponents say Amendment 1 is intended to restore funding that was cut in 2009.

Back on Adams Ranch cowboys are vaccinating and branding newly born calves. Conservation easements, included in Amendment 1, would ensure that these calves and cattle could roam here for generations.

LeeAnn Adams Simmons has worked on easements for Adams Ranch since 2007.

The easements lower property values, easing the tax burden as the land is passed from one generation to the next.

Adams Ranch has only 800 acres under easement so far but expects to close on another 1,500 this spring. LeeAnn Adams Simmons says she’s focused on Osceola County because the land here is considered to be part of the Everglades’ headwaters.

“If the ranch wasn’t here and this was another St. Cloud or Orlando it would be all cement. So where does all that water go? Well, you have to build reservoirs and canals to deal with all that water. So it is a public benefit by keeping some of these ranches preserved.”