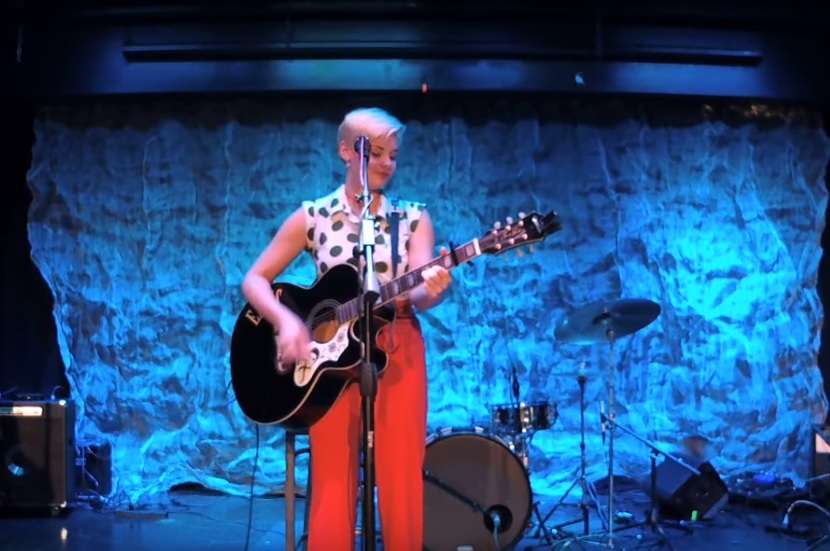 It’s hard to stand out from 44 great Tiny Desk Contest submissions from Central Florida, but Amanda Lyn did.

Amanda Lyn was one of the four artists featured at WMFE’s live recording of Intersection at the Abbey, “Tiny Desk Contest: Local Favorites”. She took the stage alone with her guitar, which featured the name “ELVIS” on the body.

Not surprisingly, Elvis is one of her inspirations.

“Well, what I love about Elvis is, he kinda didn’t, especially early on, he didn’t know what he was doing he just kind of did it. Which I think is relatable to most musicians, or artists in general,” says Lyn.

“Whenever you’re trying to do something unique, usually  it doesn’t work out, but when you just are being yourself — maybe that sounds cliche but that’s what I love about him, he just kinda did what he wanted and he sang what he liked and… it was raw. That’s what I like about it.”

She started off the night by singing Rockabilly Girl and the Blues Man the song she submitted to the Tiny Desk Concert.

“The story is quite autobiographical, so I relate to it a lot and this word ‘Timeless’ kind of became a big part of my life; this thought of “What is being Timeless mean?” I had someone tell me I was Timeless and it got me thinking  “What is that quality?” I wanted to capture that moment in my life in a song.”

Rockabilly Girl and the Blues Man is also a song off her latest album, Timeless, which is available on her website.

Click below to hear her performing Die Smilin at the live taping.