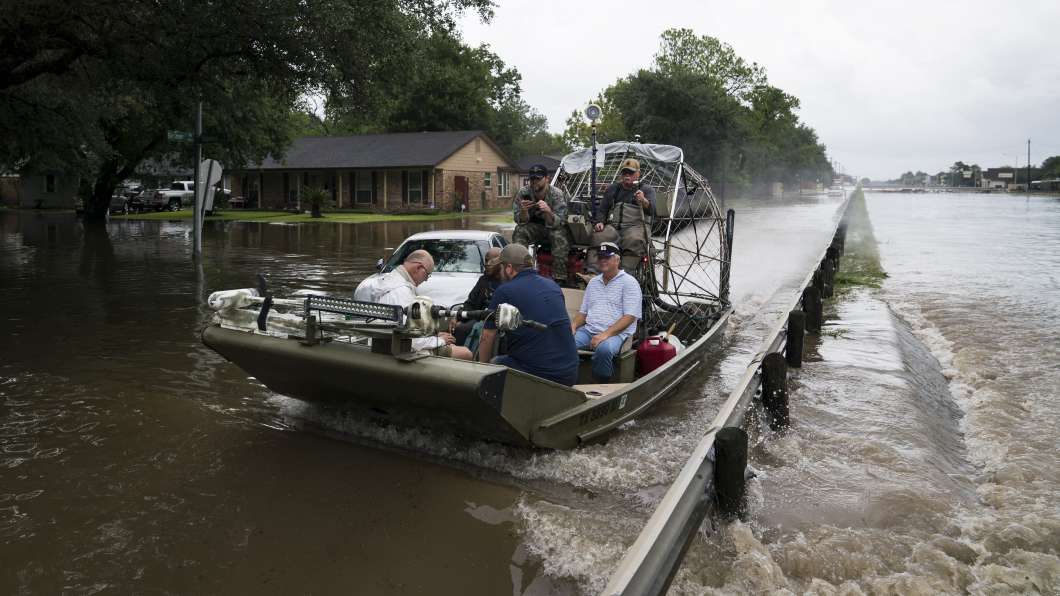 Residents and emergency workers in Houston are struggling to cope with intense flooding and rains brought by Hurricane Harvey. Volunteers use an airboat to rescue people from their flooded homes along Beamer Road in Houston on Sunday.
Image credit: Jabin Botsford

In Houston, reservoirs swollen by rain from Hurricane Harvey were opened early Monday, a move that was expected to flood more homes — but one that the Army Corps of Engineers says is needed to limit the scope of the disaster that’s threatening lives and property in Texas.

“If we don’t begin releasing now, the volume of uncontrolled water around the dams will be higher and have a greater impact on the surrounding communities,” said Col. Lars Zetterstrom, commander of the U.S. Army Corps of Engineers Galveston District. He warned residents to stay vigilant as water levels rise.

The reservoirs are being opened as emergency crews and residents are scrambling to deal with the intense rains brought by Harvey, which became a tropical storm after making landfall as a Category 4 storm late Friday.

The U.S. Coast Guard says it is “conducting urban search and rescue in the city of Houston,” acting alongside local police, fire and other agencies.

Farther inland, officials are warning of flooding from rivers that are overwhelmed from massive rainfall.

“The Colorado River at La Grange is expected to rise as high as 53 feet later this morning — 27 feet above flood stage,” member station KUT reports.

Meanwhile, President Trump has declared an emergency disaster in neighboring Louisiana, where the southwest portion of the state is bracing for another 15-25 inches of rain. The declaration, effective Aug. 27, authorizes the Federal Emergency Management Agency to bolster the response efforts of local authorities.

FEMA has already deployed more than 1,800 staff members and says it has more than 1 million meals to help those affected by the storm.

Flooded portions of Houston and other parts of Texas will see more heavy rainfall on Monday, as the National Weather Service issued new flash flood warnings for a wide area from Galveston inland to College Station.

“On Sunday, incessant rain covered much of Houston in turbid, gray-green water and turned streets into rivers navigable only by boat. In a rescue effort that recalled the aftermath of Hurricane Katrina, helicopters landed near flooded freeways, airboats buzzed across submerged neighborhoods and high-water vehicles plowed through water-logged intersections. Some people managed with kayaks or canoes or swam.

“Volunteers joined emergency teams in pulling people from their homes or from the water. The flooding was so widespread that authorities had trouble pinpointing the worst areas. They urged people to get on top of their houses to avoid becoming trapped in attics and to wave sheets or towels to draw attention to their location.”

With more rain to come, the ongoing storm has already capped off a three-month period in which Houston has received nearly a year’s worth of rain, the National Weather Service says. The average yearly rainfall is just under 50 inches; Houston’s airport has recorded more than 46 inches.

Water has threatened to go around two reservoirs that protect the city’s downtown from flooding. With both the Addicks and Barker reservoirs rising more than half a foot per hour, Zetterstrom said the goal is to give the water the most direct path to nearby Buffalo Bayou. A voluntary evacuation order went out to people who live around the dams, which sit on either side of I-10 west of Houston.

“It’s going to be better to release the water through the gates directly into Buffalo Bayou as opposed to letting it go around the end and through additional neighborhoods and ultimately into the bayou,” he said.

The Corps says the reservoirs’ structures continue to perform as expected. It planned to begin by releasing a combined 1,600 cubic feet per second, building up to a combined total of 8,000 c.f.s. over the next six to 10 hours.

The reservoirs’ water would have a delayed impact, the Army Corps of Engineers says, with the first homes flooding some two to four hours after the initial release.

Harvey could regain strength Monday and Tuesday, the National Hurricane Center says. The storm is drifting southeast — and its center is emerging once again off the middle Texas coast, a development that could bring a “slight restrengthening,” the NHC says. It’s likely to begin a slow northeast motion on Tuesday.

As of early Monday morning, Harvey’s center was more than 90 miles from Houston — but the storm was only moving at around 3 mph.

President Trump is planning to visit Texas on Tuesday to review the disaster’s impact and emergency response, the White House says. On Sunday, the president held a teleconference with top administration officials to discuss the federal effort.