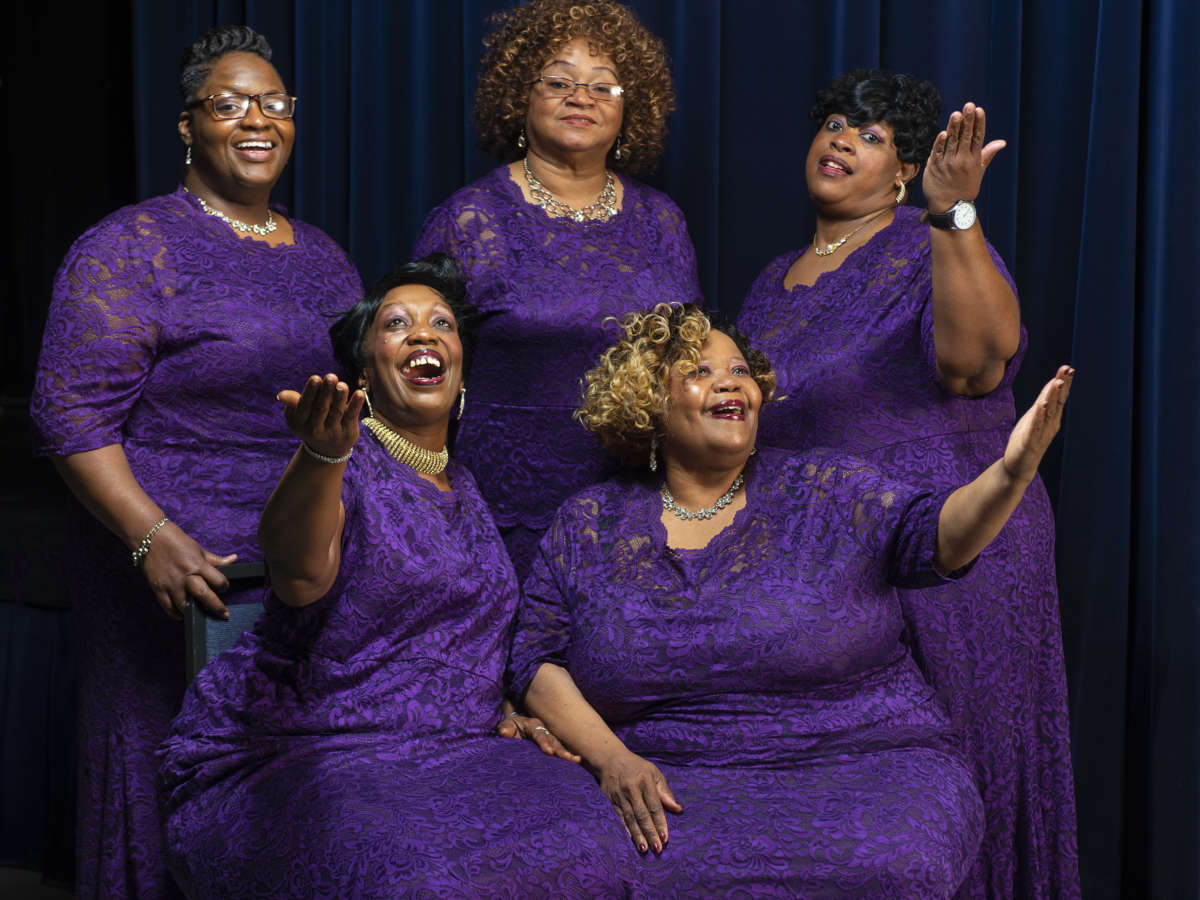 For over 50 years, the Legendary Ingramettes were led by Maggie Ingram. Now led by her daughter Almeta Ingram-Miller, the group's new album is called Take A Look in the Book.
Image credit: Pat Jarrett

Gospel music has always been a source of refuge and hope, and no one knows that better than Almeta Ingram-Miller: Her mother, Maggie Ingram, was known as the Gospel Queen of Richmond, Va. In 1961, she founded one of America’s most celebrated gospel groups, Maggie Ingram and the Ingramettes, which performed together for more than five decades. The Ingramettes stopped recording after Maggie Ingram’s death in 2015.

Now, with Take A Look in the Book, Almeta Ingram-Miller is bringing back her mother’s group as The Legendary Ingramettes. The group’s new album also features a slightly updated sound, including gospel classics alongside reworkings of compositions by Bill Withers and folk pioneer Ola Belle Reed.

“That was the intent: Not just to stay true to the roots that brought us this far, but then to take it a little further so that the music would evolve as our audiences have evolved,” she says.

NPR’s Lulu Garcia-Navarro spoke to Almeta Ingram-Miller about music and faith in chaotic times, her mother’s unintentional activism and finding inspiration outside of traditional gospel music. Listen to their conversation in the player above and read on for highlights of the interview.

On the power of faith and music in times of crisis

If you look at the history of the Ingramettes — a group created, born, raised in the pre-Civil Rights South — these are not the first difficult times that we have faced. What this does [is] it gives us a chance to use that hope and use that faith that we’ve always sang about, that we’ve always talked about. It has given us a heightened sense of the fact that we need one another in this life. I look at that as the silver lining in all of this, is that humanity’s response is that we must care for and about each other.

I believe that my mom has always had a social activist conscience, even though she didn’t know that’s what it was. And here’s what I mean by that: We partnered with a church here called Mount Gilead Baptist Church back in the ’70s to go out to the prisons when the preacher would go out there to preach. We started out at Camp 13 in Powhatan, that’s here in Virginia. And we went out there and we sang and they enjoyed it so much, and as we’re getting ready to go, one of the prisoners stops my mom and he says “Ma’am, I’ve got a wife and two kids and I haven’t seen them, and they would really love to hear this music that you’re doing. Is there any way that you could bring them up here the next time you come to sing?”

To her it had nothing to do with social justice, she just felt that it wasn’t right that somebody, even though they’re incarcerated, wouldn’t be able to see their kids because the wife and kids had no way to get out there. So she rents a big van, she rents a big bus, and cooks some food to feed the children and the families and begins to take them with us to go to the prisons so they could actually see their relatives who were incarcerated. For her, it was just a matter of doing what was right, and that’s the way it was all through the Civil Rights movement.

We grew up singing in rural African American churches and now, even the larger African American church venues. That was our main audience, was the African American community. But what we found out was that the music transcends race; it transcends barriers; it transcends genders. And so one of the things that I’ve enjoyed most is getting to know the bluegrass bands and the country music bands that we’ve become friends with. And so I always listened to their music. [“I’ve Endured“] is a song written by a lady by the name of Ola Belle Reed and I first heard it done by the White Top Mountain Band, with an upright bass picking and everybody clapping their hands. But I listened to the lyrics and it so paralleled my mom’s life and our lives. We’ve been influenced by the people that we’ve now met as we’ve gone on to folk festival-type venues that are not African American people. We’ve been so blessed by them.