Puerto Rico is without electricity as Hurricane Fiona pummels the island 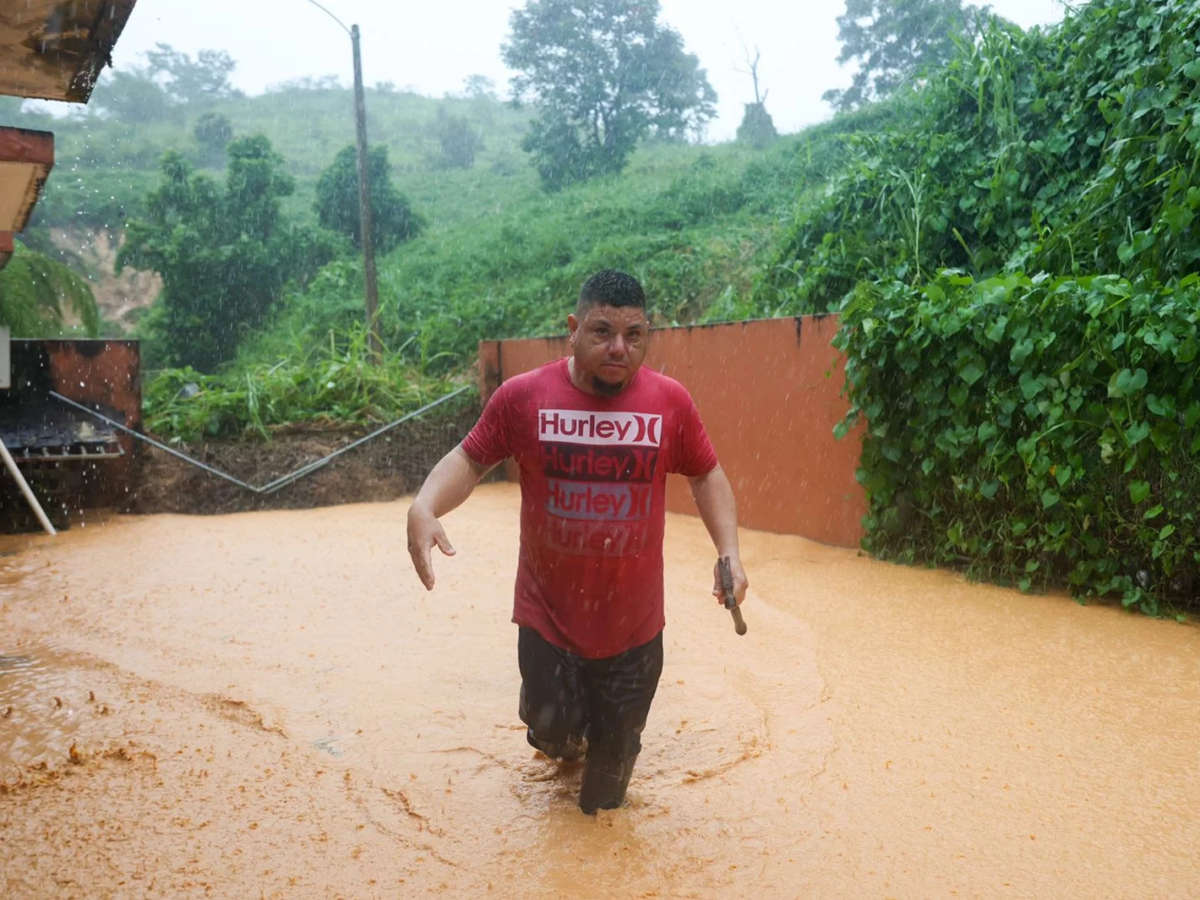 A man walks on a road flooded by Hurricane Fiona in Cayey, Puerto Rico on Sunday. Stephanie Rojas/AP

Hurricane Fiona made landfall in southwestern Puerto Rico on Sunday afternoon, as the entire island continues to reel from the knockout of its electricity grid.

Puerto Rico Gov. Pedro Pierluisi said the damage on the island is “catastrophic in many areas,” calling it a “very delicate and sad situation.” Heavy rainfall and catastrophic flooding was continuing across the island Sunday evening, according to the National Hurricane Center.

The Category 1 hurricane was predicted to produce dangerous landslides and heavy flooding on an already storm-battered island.

As of Sunday evening, the storm was centered 45 miles west of Mayagüez, a community on Puerto Rico’s western coast, according to the National Hurricane Center. It had maximum sustained winds of 85 mph and was moving northwest at 9 mph. It is now making its way toward the Dominican Republic.

Rain is expected to last all night on Puerto Rico, triggering at least 12 to 18 inches of rainfall across Puerto Rico and up to 30 inches in the island’s eastern and southern regions.

More than 1,400,000 customers — more than 3 million people — lost electricity due to a transmission grid failure from the current hurricane, according to utility companies’ reports tracked by PowerOutage.US. The website says some power circuits are being restored but is unable to say if any customers have regained power.

In a news conference on Sunday late afternoon, Pierluisi said power crews have begun the effort to restore electricity, adding that it will be a “gradual process” to get the lights back on to critical areas including hospitals, which are currently on generators, and highly populated urban centers.

Three people inside a house await rescue from the floods caused by Hurricane Fiona in Cayey, Puerto Rico on Sunday.
Stephanie Rojas/AP

Dozens of roads have been closed because of landslides, fallen trees or being washed out. Several bridges have also been washed away as a result of the storm and 125 shelters have been opened to house those in need.

The Luis Muñoz Marín international airport in San Juan remains open — but all flights were canceled on Sunday and, as of now, there’s no determination whether passenger service will resume on Monday.

It was not long ago when the island’s power grid was devastated by Hurricane Maria — a category 4 storm that caused about 3,000 deaths in 2017. More than 80% of the transmission and distribution system was ruined and the restoration process has been slow.

As a result, blackouts have been an ongoing issue on the island.

Leomar Rodríguez González, from Utuado, a town in central Puerto Rico, told NPR he and his family have been anxious as the scenes of heavy flooding and landslides remind them of Hurricane Maria.

“I’m worried about a lot of things but in the moment, flooding is worrying me,” he said.

Rodríguez González said Maria devastated his family’s home and businesses. It’s why they have been preparing for the storm for several days: they stocked up on canned foods, bought extra batteries and trimmed trees near electric poles.

Fernando Vera, who is also from Utuado, told NPR his family has never fully recovered from Hurricane Maria. His home still needs some repair and experiences some outages. “We still struggle from the consequences of Maria and it’s kind of difficult knowing we’re going to probably have to start over again,” he said.

Every year since Maria, the Puerto Rican government has been promising it would be much better prepared for the next storm. This is considered the first real test of that promise.

The government’s response plan now included making sure that backup generators are working at hospitals and stocking warehouses with food and cots and other essential supplies. But efforts to ensure that the power grid would be better prepared to handle the storm fell short.

Gov. Pierluisi said the restoration of power will not be like what happened after Hurricane Maria in 2017 and that it will be a “matter of days,” not months, to get the grid at least partially up and running. But he could give no estimate when power might be fully restored.

President Biden approved an emergency declaration for Puerto Rico on Sunday, which authorizes the Department of Homeland Security and the Federal Emergency Management Agency to coordinate disaster relief efforts.

The storm is moving toward the Dominican Republic

The storm is headed toward the Dominican Republic and is poised to travel to the east of the Turks and Caicos Islands on Tuesday.

The flash flooding will likely be “life threatening and catastrophic” across the eastern Dominican Republic, according to officials monitoring the storm. The combination of a storm surge and the tide could produce rising waters up to three feet in the southern coast of the island.

Earlier, Fiona wreaked havoc on the eastern Caribbean, damaging roads, destroying properties and killing person in the French territory of Guadeloupe, Sylvie Gustave Dit Duflo, an official for the region, wrote on Twitter.

The storm is forecast to be potentially devastating for parts of the Dominican Republic, northern Haiti and the southern end of the Bahamas in the coming days.