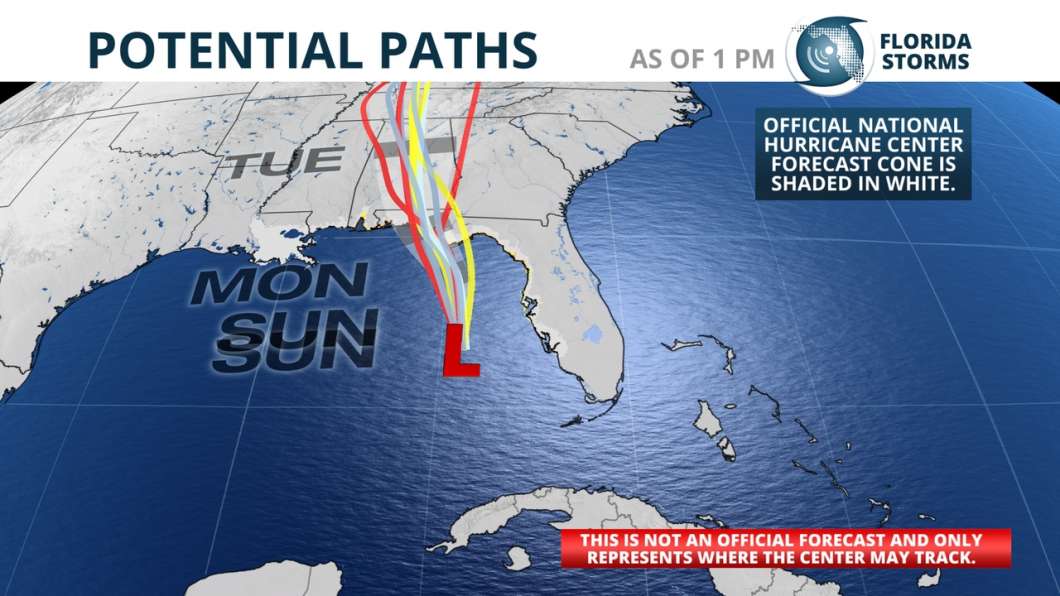 The season’s first named storm was gaining momentum and strength as it moved through the eastern Gulf Sunday morning. Alberto is forecast to make landfall between Panama City and Destin, Florida early Monday morning as a strong tropical storm.

This is nearly 60 miles east and about six hours sooner than the forecast issued by the National Hurricane Center one day ago, but well within the margin for error two days out.

Tropical Storm Warnings continue for nearly the entire Gulf Coast of Florida, and a Storm Surge Watch continues for coastal regions from the Nature Coast to Pensacola. A Flash Flood Watch is also in effect for the entire Florida Panhandle – including all inland areas – through Monday night, with coastal flooding and rip currents adding to the hazards at area beaches.

As of 11 am Sunday, Subtropical Storm Alberto was located 130 miles west of Tampa and moving to the north at 14 mph. The storm has been rather disorganized for most of its life over water (thus the “subtropical” classification), but has recently become more tropical in nature. “With deep convection closer to the center and a slightly smaller radius of maximum winds, it appears that Alberto is beginning its transition to a tropical cyclone,” the National Hurricane stated in their Sunday morning update. Further strengthening is anticipated prior to landfall, which is now projected to be early Monday morning in the vicinity of Panama City Beach.

The National Weather Service says a storm surge of 2 to 4 feet is possible in flood prone areas along the coast, although specifics on where the highest water rise might be are “still unfolding” at this time. Tropical Storm force winds of 40 to 50 mph are possible near and up to 150 miles to the east of where the center of Alberto comes ashore. Minor wind damage, including downed trees and power lines, will be possible where these wind gusts cross land. However, considerable uncertainty still exists on precisely when and where those winds may occur. The low confidence is due to the somewhat disorganized and erratic track record Alberto has exhibited so far.

The primary (and most known) hazard from Subtropical Storm Alberto has always been, and still is, heavy rain. Both types of inland flooding – flash flooding and river flooding – are possible over the next few days, especially considering the size and depth of Alberto’s moisture field. Intense rainfall rates of 1 to 2 inches per hour may occur during thunderstorms through Wednesday, and this could cause a rapid water rise near creeks and streams that are already filled to their banks. Those same creeks and streams will then drain into larger rivers that might also flood for several days after the event. Five-day rainfall totals in the Florida panhandle are expected to be in the 4 to 6-inch range, with locally higher amounts up to 10 inches possible near and east of Alberto’s path.

While the coastal hazards, such as surge and wind, are expected to subside by Tuesday, the persistent onshore flow is likely to keep rain chances elevated through the end of the week. The risk for rip currents will also remain high at area beaches for several days, and water enthusiasts are encouraged to use caution or check with local authorities before entering the water.

The Florida Public Radio Emergency Network will provide frequent updates on their “Florida Storms” Twitter and Facebook accounts over the coming days as Alberto moves ashore and the hazardous weather pattern remains in place.